As previously discussed, Frontier Developments is well underway into getting Elite Dangerous‘ next big expansion released to the public. After the initial announcement, FD wasted no time in releasing further information discussing some of the new content to come with Engineers.

The 2.1 Engineers update, alongside the 1.6 global update, is reportedly one of the largest updates to be released. That said, all information discussed here, and even on the official site, has to be read knowing that what we’re getting to see are only pieces of a whole not yet available. Undoubtedly, even what we are shown is going to be subject to changes and tweaks before it makes its way to the live servers. Such is game development.

Aside from the robust new equipment and outfitting coming with 1.2, which we will discuss in a moment, Engineers is also looking to create a more active universe, both in space and planet side.

For the space side of the equation, the Galaxy Map is getting some filters to aid Commanders in their quest to… do whatever it is they’re hoping to do. More directly, you’ll soon be able to check out which systems are at war, in the middle of foot shortages, lockdowns, or are in full on anarchy. The total list of nicely color-coded filters currently includes:

Some are related to specific Missions in both 2.1 AND 1.6, so Commanders will need to seek specific locations using the discovery scanner, or by scanning the nav beacon (if the system has one). Scanning a nav beacon will give Commanders the exploration data for the system (if you don’t already have it).

In addition, a breakthrough in sensor technology, will be rolled out across all Pilots Federation ships as one of the many membership benefits, allows USSs to be scanned while in supercruise, so Commanders can make a better-informed judgement of whether to get involved or not.

Not only will the universe have more activity to get involved in during your play sessions, but NPC’s will also be much more active, especially near planetary surfaces in 2.1. High-ranking NPC pilots will be deadlier than before, and conducting your shady operations at some settlements will be made more difficult by the inclusion of defending ships stationed at some locations. 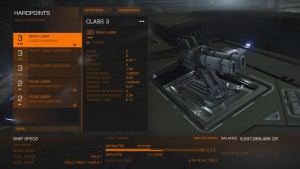 Without a doubt the biggest changes coming with Elite Dangerous: Engineers will be the new looting, crafting and accompanying ship updates. All Starports in both 2.1 and 1.6 are getting overhauled Outfitting menus. The main motivation for the changes to the Outfitting screen are the soon-to-be-announced module upgrades. Expect to be able to apply filters and analyze gear stats in a much more “aesthetically pleasing layout,” and if you’re one of the lucky few to have functioning VR, you’ll be pleased that the new systems were designed with you in mind.

While checking out some of the newest module and weapon additions in 2.1, you’ll notice that two completely new weapon classes are available: Large and Huge. Utilizing both fixed and gimballed mounts, expect these big fellas to live up to their namesakes and deliver some beastly firepower. On the other end of the spectrum, if faster paced dogfights are your thing, there will be performance enhanced size two and three drives available for select ships.

Looting and Crafting will definitely leave a mark on the game’s overall mechanics, and while there is still much to be revelaed, the fact that players will soon be able to control their ship’s stats more freely, thanks to module tweaking, is undeniably an exciting feature. Being able to jump into your favorite ship, tweak it to your combat style using experimental tech then fly off to wreak havoc sounds like a lot of fun. I love me some customization options, and it sounds like Frontier does as well. Stay tuned for more info over Engineers as it gets released!