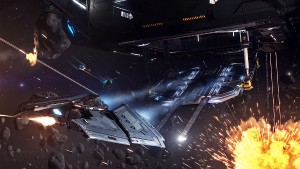 EGX 2015, otherwise known as the Eurogamer Expo, took place over last weekend and gave us some more glimpses of Elite Dangerous’ next series of expansions, aptly named Horizons. As we previously covered, Horizons is introducing planetary landings to the Elite Dangerous universe and with that comes new gameplay possibilities, such as plant exploration and new combat/mission scenarios. However, last weekend Frontier Developments released even more tantalizing updates coming to their flagship game in the near future.

While the prospect of planetary landings coming to Elite Dangerous is, without a doubt, a much wanted addition for the community, the other content coming along is just as, if not more, exciting. Along with being able to deploy new Surface Recon Vehicles (SRV’s) to explore planets, which, by the way, are announced to be real 1:1 scale worlds, Horizons will also give players the ability to dock and deploy fighters from their ships. These fighters can be controlled by A.I., giving players a whole new level of strategy when planning attacks, or you can jump into the cockpit and take over the fighter yourself, in order to take out the other pesky ships plinking away at your mothership. 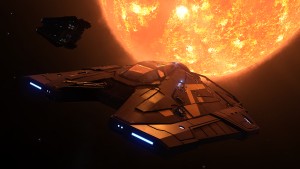 While that, in and of itself, is a welcomed addition to the game, once you couple it with the fact that Multi-Crew ships are soon to be a reality, a whole new playing field opens up. Multi-Crew ships will let players man ships together to control the weapons systems, turrets, and flight duties. And yes, this means that you and your buddies will be able to deploy player controlled fighters from player controlled motherships. You’ll finally be able to wear that Battlestar Galactica flight suit you keep hidden in your closet. 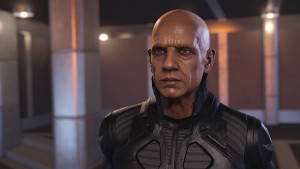 Without a doubt, my favorite addition coming in Horizons is the new Commander Creator. I know, I know, from a practical and gameplay standpoint, planetary landings, fighter docking, and multi-crew ships bring way more substance to the game than simply creating an in-game avatar. However, there’s something to be said about being able to create your in-game likeness –it brings a level of immersion, intimacy, and connection to a game’s universe when you get to create and place your virtual self into the action. That said, the new Commander Creator does open up new avenues for character progression that will impact that game’s mechanics in new ways. From the developer:

There are features that are trickier to illustrate but still very significant, like the extensions to the mission system with new military missions and rank progression, Powerplay missions and chained missions which will deliver an even richer gameplay experience. And as already announced, season two will introduce a new loot and crafting system, letting you create unique equipment. 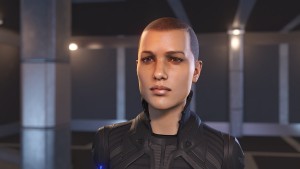 Clearly, the new avatar system coming with Horizons is more than simply an aesthetic addition, with Frontier Developments already planning ahead with the system in mind.

Along with being able to create and play as your own avatar, it was announced at EGX that SteamVR/HTC Vive support are coming to Elite Dangerous in a free update this holiday season. For those unfamiliar with the HTC Vive, it will be the first of the new generation VR headsets available to consumers (yes, even before the Oculus Rift), and so far it’s been getting rave reviews from developers and players alike.

Finally, Frontier Developments touched on the CQC update coming in just a few, short weeks. Update 1.5 will bring with it a handful of new spacecraft, including the Viper Mk IV which will be given to every player who backed the original Kickstarter campaign during the beta or above. Your new Viper Mk IV will be docked at a starport and waiting for you to pick it up.