Frank Bernard penned this trio of great yarns about a fictional American volunteer pilot in WWII, Ossie Wolf, and his adventures in the Battle of Britain, Africa and the Med.

True story: I was sitting on a flight from London to Switzerland, reading the second book in the series, ‘Band of Eagles’, about the seige of Malta, when a very well dressed elderly gentleman next to me asked me if that thing I was reading (the Kindle) was one of these new fangled e-book readers. He had a lovely, plummy British accent. I showed it to him, and he asked what book I was reading, so I showed him the cover, which shows Spitfires in flight.

“Well,” he said, “There were no bloody Spitfires on Malta when I was there! By the time they arrived, the party was just about over.”

It turned out he had served in the intelligence corps on Malta in 1940-41 and he had a host of stories of starvation, hiding in caves from the incessant bombing, thirst and capturing an Italian pilot who landed in the sea near where he was sunbathing.

So for this conversation, I am always grateful to Frank Bernand! Having spoken already about the second book in the series I will review the first and last books to give you a flavour.Blue Man falling

Publisher’s synopsis: In September 1939, World War Two is declared and Europe holds its breath. When will the Third Reich strike west across France and the Low Countries? For RAF fighter pilots patrolling the Franco-German border it is a bizarre time: one moment they are chasing an elusive Luftwaffe, the next ordering champagne in Paris. 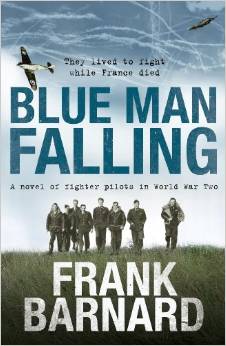 Then, in May 1940, Hitler launches Blitzkrieg and the Hurricane squadrons find themselves engulfed in battle. From the cockpit of a Hurricane fighter plane to the louche salons of Parisian society, Blue Man Falling follows the fortunes of two RAF pilots, an Englishman, Kit Curtis, and an American, Ossie Wolf, during the Battle of France 1939-40.

Capturing the startling contradictions of a time when people were at their best and their worst, it brings to life the exhilaration and fear of aerial warfare with astonishing power and narrative skill. Above all, it lays bare the meaning of war, and the selflessness of those prepared to fight until the end.

The conflict of personalities between the murderous Ossie Wolf and the debonaire Kit Curtis makes this book. Aerial sequences are gripping and period atmosphere is excellent.

Some may enjoy the subplot (a fifth columnist is outed) but I just found it confusing and irrelevant to the main show, and skipped through those sections. 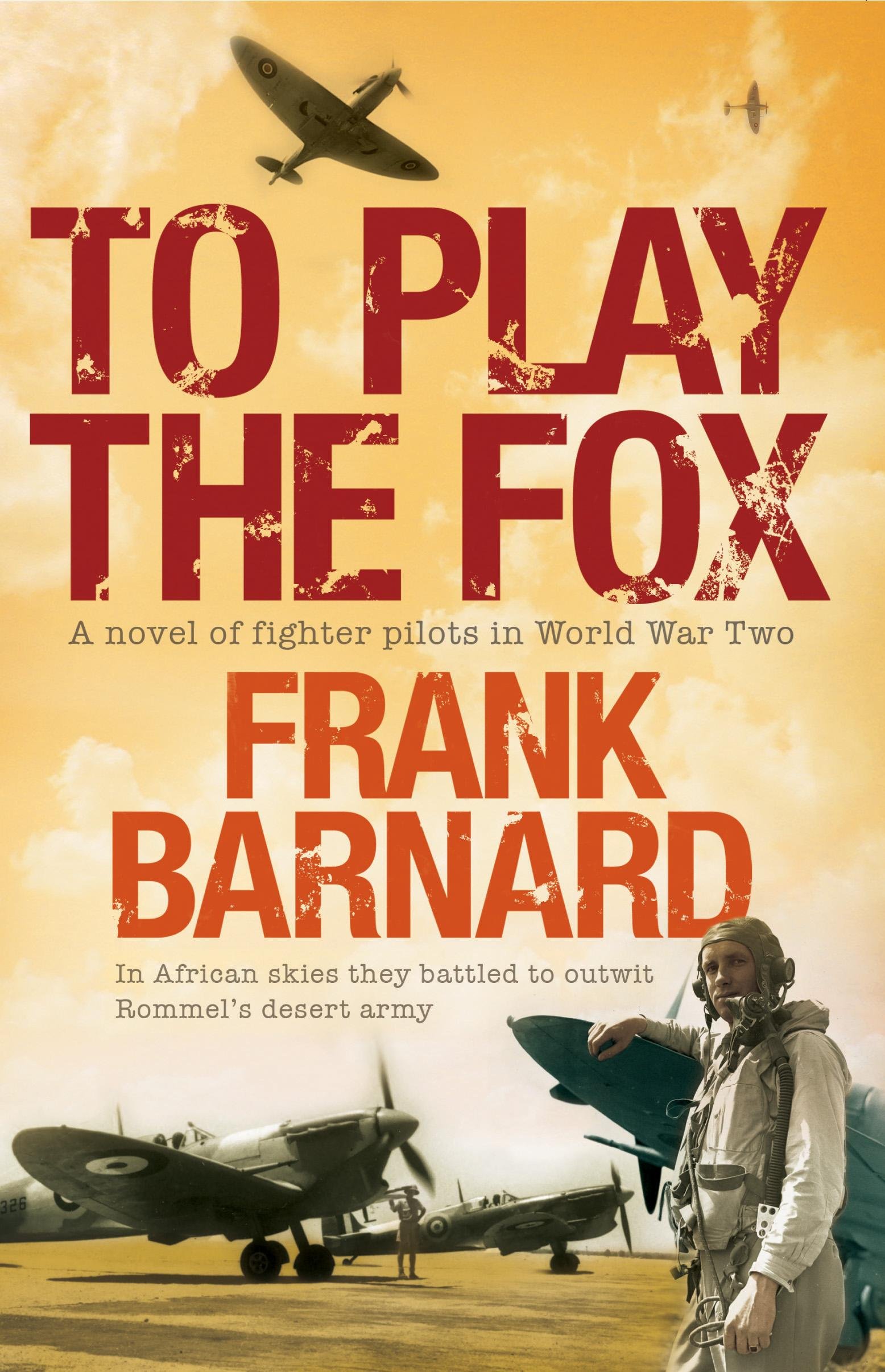 To Play the Fox

If you are old enough to remember and have enjoyed the Biggles series of books, then Barnard’s novels can best be described as ‘Biggles for Big Boys.’ In fact, this episode bears a striking plot resemblance to the iconic ‘Biggles Sweeps the Desert’ which was released in 1942 and had Biggles operating out of a secret desert airstrip, plagued by the nefarious Hauptman von Zoyton.

I mentioned this to Bernard in the blogosphere (he is very active on social media) and he emphatically denied it!

PLOT: To Play the Fox is described on Amazon and other websites as an adventure about events surrounding the famous Desert Fox, Fieldmarshal Rommel. This, and the title, is completely misleading as Rommel is conspicous by his absence in this book. The story actually revolves around Curtis, who after a flying accident has been relegated to reconnaisance duties, and Ossie, who after a petty insurrection has been relegated to ferry pilot.Curtis gets shot down, and Ossie gets drafted into a special operations group operating (you guessed it) out of a secret desert base. Von Zoyton in this modern version is the little known General Stumme, a real Afrika Korps general who temporarily commanded the Afrika Korp during Rommel’s absence in Germany during 1942 because of serious illness. Most of the book centers on Ossie and friend’s attempts to locate and assassinate Stumme.

HISTORICAL ACCURACY: Stumme did die during the Alamein offensive by Montgomery, which together with the collapse of German forces necessited Rommel’s early return from Germany. History records Stumme’s cause of death as heart attack, but Barnard proposes an alternative (implausible but entertaining) scenario.

THE GOOD: the dichotomy of the two heroes of the tale, Ossie and Curtis, who spend this episode in separate spheres until fate flings them together.

THE NOT SO MUCH: that this is as much about the land war in the desert and the role of the specialist operations groups that fought there, as it is about pilots and air combat. But if you like land war fiction as much as air war fiction, you’ll be happy. 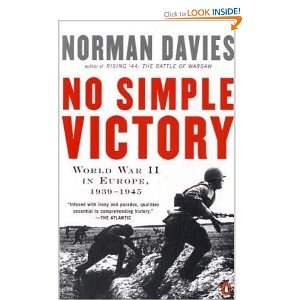 Exceptional for the broader perspective it provides on all the major conflicts of the war. Davies has attempted to look at the conflict in a non-partisan light, taking the dictum that history is written by the victors, and turning it around to imagine a history written, if not by the vanquished, then by the forgotten.

In this treatise his central argument is that while the western powers achieved one limited objective by the end of the war – the destruction of nazi Germany – they lost the broader conflict because half of Europe was in any case occupied, by the USSR. An occupation which prevailed until the late 1980s.

This echoes comments in Russian media recently which were disparaging about Western Europe’s commemorations of D-Day, because for Russia, D-Day was a sideshow, and they would have defeated Germany without an Allied landing in the West, by their own calculations. Read the article HERE.

Davies uses a variety of techniques to lift his narrative from the impersonal (a roll call of statistics regarding the dead, the wounded, the imprisoned, materiel produced, materiel wasted) to the personal, with first person narrative accounts highlighting that behind every statistic was a person.

Even the most well read will find food for thought in this study. Did you realise, for example, that there were more German/Russian POWs executed by both sides during WWII, than people of Jewish descent? That Czech pilots in the RAF, when they returned to Czechozlovakia after the war, were not celebrated as heros, but interred as political dissidents, many of them dying in captivity in Communist prisons, or surviving to be released in the 1950s and 1960s to ignominy, rather than the lauded position they deserved? Did it ever occur to you that for most of the countries in Western Europe, the ‘war’ consisted of brief and bloody periods during the invasion and liberation of their countries, between which there were several years of relative normality for normal citizens? Davies highlights these incongruities with the traditional narrative with a gentle guiding prose that illuminates without stooping to provocation for the sake of it.

The reader can drown in the detail in Davies book however. If you were wondering how many Spitfires Lord Beaverbrook was actually able to produce from the aluminium he collected from British housewives, the answer is here, down to the rivet. Davies has a love affair with obscure data from far flung archives that very few will share. Where he succeeds is in dissembling the broad brush definition of ‘victory’ that modern European (read British, French, American) history tells of the war. Where he fails is in drowning the reader in statistics intended to shock, which instead serve only to numb.

Discuss these reviews on the forums…