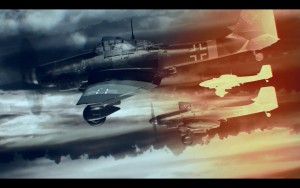 It’s been a while coming, but 1C Game Studios have finally announced that update 1.104 to Battle of Stalingrad is ready for beta testing. The update brings with it the German fighter Bf 109 E-7, the summer and autumn Stalingrad maps, as well as the first part of the new campaign which is set before the existing one and utilizes the new maps. However, 1C also released a bit of a surprise in the form of tanks (more below).

Info on the next iteration to BoS is still a bit sparse, but we do know that player caps will be increasing to 84 players per multiplayer server, as well as the inclusion of some physics optimizations and tweaks. 1C hinted at improved ground contact modeling and new surface types, but we’ll have to wait until the next dev update to learn more.

Luckily, a host of new screenshots and a couple videos (including the aforementioned tanks) were released to sate us until we can get our hands dirty. The development of tanks came as a bit of a surprise to a number of players, and so far the jury is still out on whether or not bringing them into BoS is a good call or not. Personally, anything that adds substance to any game’s mechanics and gameplay is good by me, but until we know just how the tanks fit into the overall scheme of things, it’s hard to make a judgement call.

Naturally, longtime fans of the game are concerned that the move to develop tanks might take away time from flight development. However, anyone who has followed the game long enough will be aware that 1C has had tank aspirations for a while now, indeed, a producer took to the forums to announce they’ve had the tech to do it for some time. In any case, it was a surprising announcement that has left a portion of the community concerned. That said, plenty other players are excited about the prospect of tanks grinding the dirt below on each battlefield. Hopefully 1C will release more details soon, so we can all see what their vision of the future holds.

Tanks are coming to Battle of Stalingrad