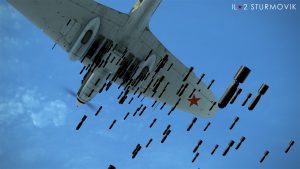 Developer 1CGS has released update 2.010 out into the wild, and with it comes a new aircraft, features, and fixes. Prominently, the update releases the IL-2 Sturmovik Mod. 1943 to all Battle of Kuban owners, which has a great deal of improvements over the existing version. The changes to the aircraft necessitated quite a few optimizations and new bits of tech to fully realize its potential.

One of the most exciting updates is to the modeling of the PTAB-2.51.5 anti-tank bomblets. Since the Mod. 1943 can carry up to 240 of these bomblets, 1CGS had to implement new optimizations as well as trajectory calculations for each individual bomblet and clusters of bomblets. Coupled with this rather large overhaul is the much anticipated release of fully functioning rear view mirrors:

It was a complex task even to choose how to implement them. The approaches our competitors use are very different and each of them has significant issues. In one game, the mirrors are like monitors – the image you see in them won’t change according to your view when you move your head in the cockpit in 6-DOF using keyboard commands, TrackIR or VR HMD. In another title, your own aircraft isn’t reflected in the mirror, visibility distance is reduced and the mirror image has a fixed resolution, which results in a pixelated image if you lean close to the mirror. Our lead programmer chose his own approach for this feature. It gives realistic and good looking results that are compatible with 6-DOF and VR technologies and are free of flaws found in the competing titles. We use optimization techniques for mirror rendering as well, but they aren’t critical to the combat sim gameplay, so we can say that our mirrors are the best among the flight sims now. You’ll see the rear view mirrors in the upcoming update 2.010 – they will be selectable in the modifications list of P-40E-1 and Yak-1b series 127 (they were equipped with mirrors in stock configuration).

One minor, but very welcomed change, comes in the form of a slight re-balancing to overall aircraft combat performance. Along with this comes a slew of other fixes and tweaks: