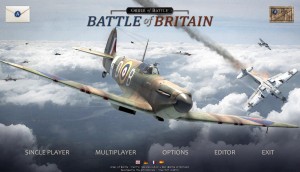 The Aristocrats, makers of Order of Battle: Pacific, have announced that on the 15th of this September, they’ll be releasing free content which covers the historic Battle of Britain. The update will cover the entire course of events from the “Channel Battles” all the way through the aftermath, and marks the 65th anniversary of the major turning point in World War II.

For the uninitiated, Order of Battle: Pacific is a sprawling World War II wargame which features campaigns from both the US-led Allies and the Japanese Empire. The hexagonal-strategy based game has over 500 unique units that players can unlock throughout the course of their war. Combined with a system of Specializations, which gives players the ability to customize their forces with special units and skillsets, and the game’s set of unique Commanders, which can be added to units to further enhance their abilities, Pacific‘s gameplay possibilities are vast.

The update, coming in just a few short days, will expand on the game’s content with a free “total conversion” mod that will bring to life the Battle of Britain.

If you’re unfamiliar with total conversion mods, they work exactly as the name implies. While not many details have emerged over just what will be included in the mod, as a total conversion mod, or re-imaged game, will probably include new skins, maps, and perhaps some updated tactics. Just how intricate this re-working of the game will be remains to be seen, but the update is free in any case. What will be interesting to see is how the Devs handle the nature of the campaign, considering that the historic conflict was waged entirely by air forces.

The Battle of Britain was basically Germany’s attempt to gain air superiority over the Royal Air Force. From July through September of 1940, an unparalleled aerial battle took place over the skies of Britain, which resulted in devastating bombardments, thousands of lost pilots and aircrews, and around 90,000 civilian casualties – almost half of which proved to be fatal.

Germany’s failure to subdue Britain resulted in Hitler’s first military defeat and sparked a major turning point in the war. This turning point, which happened September 15th, 1940, saw the German Blitz begin to wane as the tides of war turned against Hitler’s forces.

Battle of Britain, Order of Battle: Pacific, Slitherine, The Aristocrats