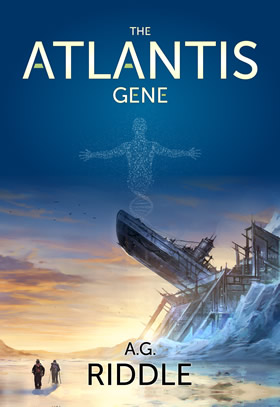 PreambleI am just beginning to dive into Elite Dangerous, and to get in the sci-fi mood, I picked up this huge time, universe and species spanning space opera trilogy.

The three titles in the Origin Trilogy include Atlantis Gene, Atlantis Plague and Atlantis World, and I made the mistake of reading the first two in short succession, and then the last title a couple of months later.

This is a trilogy that needs to be read one book after the other. The plot is so complex, the events so intertwined, and with so much jumping backward and forward in time during the story, that I found it frustratingly hard to pick it up again for the third book.

So, treat the three books as one big story, and read them as three chapters of one big, thick book, for the best chance that you will be acually be able to follow along!

The Origin trilogy adds a new twist to the question ‘Where did we come from?’

The first book, ‘Atlantis Gene’ has all the ingredients of a compelling story – mysterious object buried in the ice, ancient para military cult dedicated to protecting its secrets, beautiful scientist (Dr Kate Warner) trying to unravel the mystery with the help of a deadly ex-military sidekick and love interest. The book ends with the release of a plague that according to the blurb, will ‘force the next stage of human evolution–even if it means killing 99.9% of the world’s population.’

The second book, ‘Atlantis Plague’ details the ravages of the plague. The blurb says: ‘In Marbella, Spain, Dr. Kate Warner awakens to a horrifying reality: the human race stands on the brink of extinction. A pandemic unlike any before it has swept the globe. Nearly a billion people are dead–and those the Atlantis Plague doesn’t kill, it transforms at the genetic level. A few rapidly evolve. The remainder devolve.’ Our heroine tries to find a cure for the plague, while at the same time unravelling the mystery of who is behind it. She gets quite a surprise.

The third book ‘Atlantis World’ unveils a number of mysteries: how did we get here, who was behind the Atlantis plague and what does it all mean? Again, the blurb lays out the roadmap, “Kate Warner cured the global pandemic, and she thought she could cure herself. She was wrong. And she was wrong about the scope of the Atlantis conspiracy. Humanity faces a new threat, an enemy beyond imagination. With her own time running out and the utter collapse of human civilization looming, a new hope arrives: a coded message from a potential ally.”

The writing is tight, and the dialogue (often a challenge for a new writer like AG Riddle) flows nicely, and believably. The nerdy scientist teamed with the muscle bound warrior is a bit of a cliche, but luckily doesn’t distract from the pacing or credibility of the plot. It might have been very nice to see the roles reversed, (nerdy male scientist, muscle bound female warrior) but AG Riddle is playing to his audience nicely here and the popularity of the books shows this was the right decision. The whole ‘unveiling of the origins of man’ is an intriguing premise that kept me engaged through at least the first two books.

The scope and sweep of the drama is truly space operatic – entire worlds are wiped out, populations enslaved, continents flooded, fleets dismembered. This isn’t a book about the end of Earth as we know it, it is about the end of the Universe, as we don’t know it!

And the science is intriguing. Viruses and antiviruses, gene modificiation, cloning (both of body and mind), interstellar travel and space warfare.

But I have to admit a lot of the alien technology left me incredulous or confused. Viruses and their cures that can be transmitted by a mysterious ‘radiation’ – I felt it was never credibly explained how biological weapons could be transmitted by ‘radio waves’. Resurrections that can be effected by reviving clones with the full memories of their original ‘persona’, even when that individual dies in another space and time – another one that I didn’t feel was properly explained. Now, I’m pretty open to futuristic technologies being assumed, and not fully explained (‘beam me up Scottie’), but there were quite a few ‘aw, come on…how the heck…‘ moments in this series.

And the plotting of the third book really tested me.

Not just because I had to work so hard to pick up the convoluted plot after putting the books down for a couple of months. Riddle really ties himself in knots at the end, with doppelgangers (doubles) of the key characters, reliving each other’s memories in one time period, fighting each other in another, travelling through time and constantly being killed and resurrected (I kid you not, one of them is, ridiculously, killed 100 times)!

Sound confusing? It darn well was. All that back-and-forthing is done in order to explain the back story behind the origins of humanity, but you end with a somewhat frustrating reading experience.

The author, AG Riddle, admits in the post script that he was worried about how the third book would be received as he had to do a lot of plot wrangling to tie up all the loose ends. With good cause!

In the end, I got it (well, most of it)…but I felt he made me work too hard for the reward of finishing!

I enjoyed the first book, was a bit lukewarm about the second but still engaged, and hoping for a slam dunk finale, and then disappointed by the third.

Discuss this review in the forums…

Half Way Home and Hurricane, by Hugh Howey Book Reviews