A younger version of myself was obsessed with all things Rainbow 6. I was there when Wolfenstein, Doom, Blood, Quake, Hexen and every other “Unique FPS” showed up. I enjoyed them about as much as I could, but they never held my attention for long. Rainbow Six launched and all I knew of it was the fact that it was tied to some author. I started up the game and found the planning stage infinitely interesting. I was never great at it, but it kept me entertained for significantly longer than any other shooter up to that point. What’s more is the fact that once in game, I didn’t get to take an unrealistic amount of bullets, and either did the enemies, so patience and skill trumped twitch players. It was a blast.

Years later Rainbow Six: Vegas launched on Xbox 360. While it removed some of the planning, which I never was good at anyways, it did keep the intensity of a single bullet putting you down for the rest of the round or ending the level. It is one of the few games I have spent much time playing, and many a Friday night was spent in Vegas (the game) with friends, trying to overcome the multitude of challenges. Since then, no game has given me that same feeling of intensity. One screw up and its curtains. 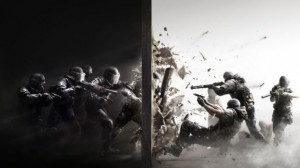 It would appear that is all about to change. While I was not able to attend E3 this year, reports of Rainbow Six Siege and the video shared at the show are pointing to a decidedly huge turn from the more recent versions of the game. Destructible environments and a more realistic gun play system pique my interest the most. It also appears that “real world” tech will give a nod to the planning and information gathering sections of early iterations of the series.

It would seem that a great deal has gone into creating a real world that lets you attack situations as you decide. With almost everything from the ceiling to the floor reacting to explosions and gunfire as you would expect, your approach to a particular hostage situation may be much different than mine. It would appear that there is a coop mode vs. AI and a player vs. player mode as of this point.

Multiplayer deathmatch modes seem to keep a focus on the tight quarters strategic combat versus a more Call of Duty-esque fast paced twitch style of play. The demo discussed in this IGN article tells of a 5v5 match in a two story house. One team is on the assault side of the map while the other is defending. Multiple classes are available to choose from and it would seem there is plenty of customization when it comes to load outs. Those on the defensive side of the struggle vote for placement of the objective, a hostage in this scenario. Attackers similarly get to choose where they spawn. 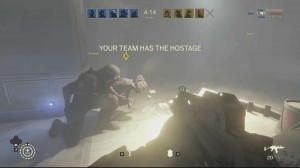 Drones and other technology can be used for scouting to learn more about the defenses they will be facing. Both sides are able to see how many of their team is still alive, giving a real feeling of teamwork from the sounds of it. One potential issue is that dead characters can still speak and use cameras and drones. This will hopefully be an option that can be turned off as it seems to take away from an otherwise semi-realistic take on the genre.

Finally, players will have a chance to help their own teammates up, but if it is anything like other multiplayer shooters, the risk is often going to outweigh the reward. Granted, with the Rainbow Six series, communication is key, and setting up a protective area to revive ambushed allies fits right into what I am looking for from the series. The game will release sometime in 2015.