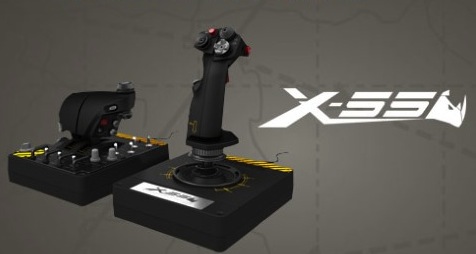 Mad Catz Interactive, Inc.  announced  that the Saitek X-55 RHINO H.O.T.A.S. designed and developed to give flight simulation enthusiasts the a realistic flight experience at an affordable price, is expected to ship to consumers in early 2014.

The X-55 RHINO is styled after modern fighter jet control systems and was built from the ground up to deliver a multitude of customizable options.  An adjustable stick spring system allows pilots to alter the force required to move the stick and four springs of varying resistance are included to provide a total of five different options.

The X-55 Rhino’s stick and throttle units each utilize their own separate USB connection, offering greater flexibility during customization. You are free to situate the controls exactly where you want them, without them being tethered to each other.

Saitek has a form to sign up so you will be notified when they will be accepting pre-orders:  http://www.saitek.com/x55/