Accessibility was not a big design factor in most WWII aircraft, especially bombers. I climb up into the belly of the beast, literally, through one of two access ladders (you can see the access ladders in some of the photos above). Internally, the B-25 is split into two crew areas – forward and aft – separated by a bomb bay. There is no way to go between the two areas on this aircraft – well, no easy way. There is a very tight looking tunnel although I’d be willing to bet more than one airman has at least tried to make their way through here. 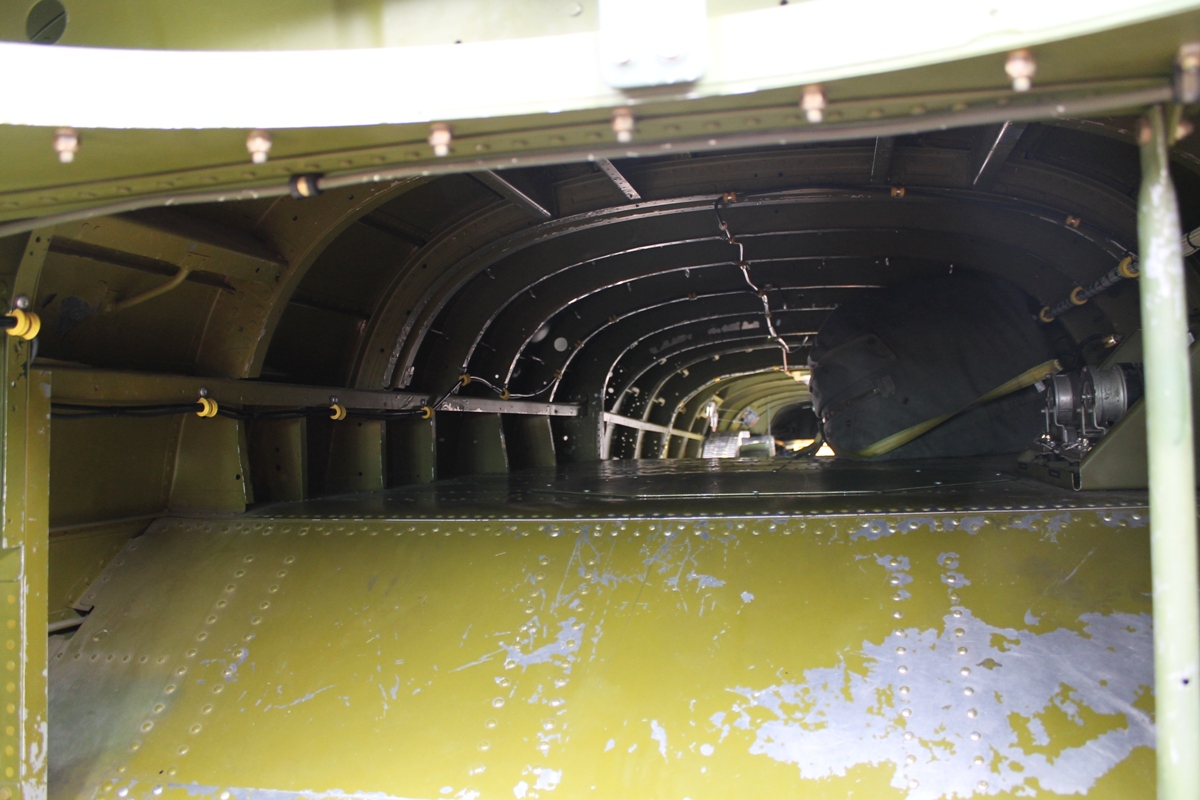 “Uh, you want me to give me a shove or something?”

The forward compartment is cramped; six folks have to squeeze into an area the size of a large closet but with sheet metal and equipment protruding at all sorts of odd angles. Getting banged around in any airplane is never a fun thing, but it seems like it could quickly turn deadly in this cockpit. 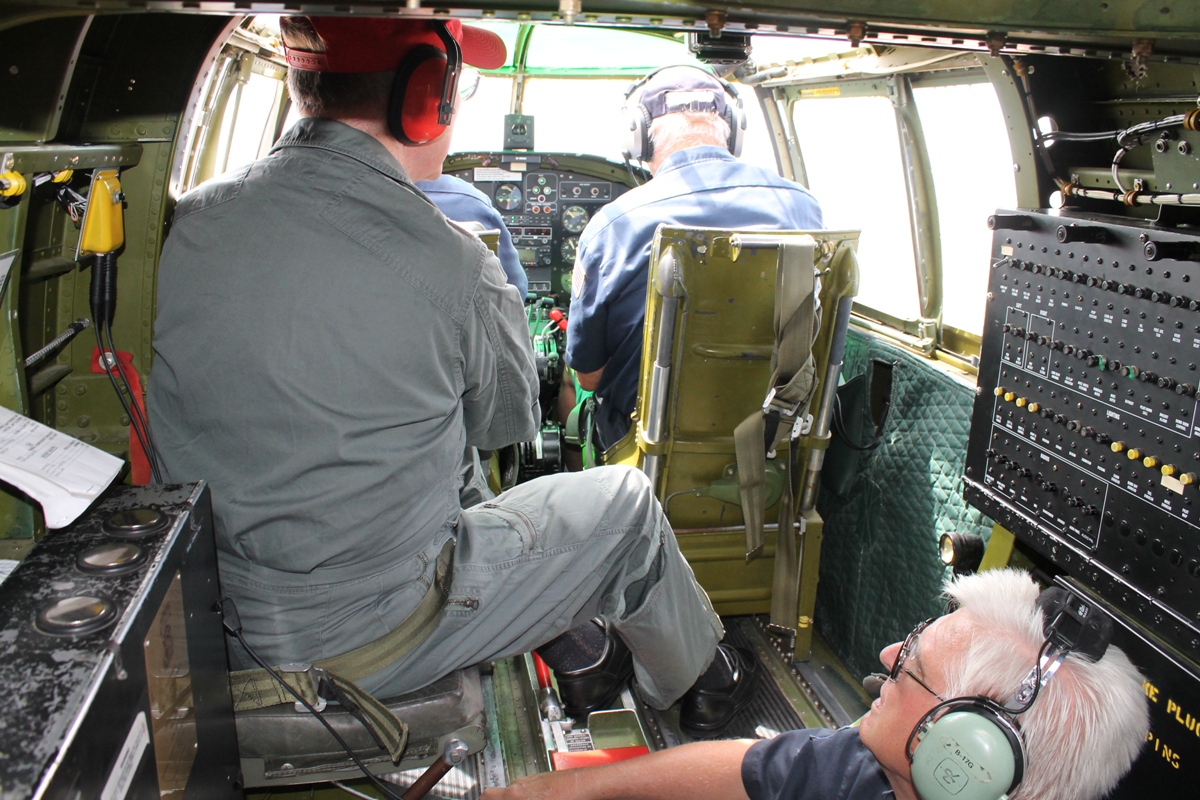 Col Rich Bushong supervises the young aircrew as they prepare for launch.

I took the shot above from my seat in the back of the forward compartment. Another media representative was sitting to my right. The flight engineer,  D.Z., sat on a folding jumpseat at our ankles – right on top of the emergency exit.

After loading up the aircraft with its cargo of passengers, the air crew professionally walked through their checklists. I managed to snag a pair of the working headphones (as opposed to the deaf ear protector cups that were presented), and got to listen in to the process. 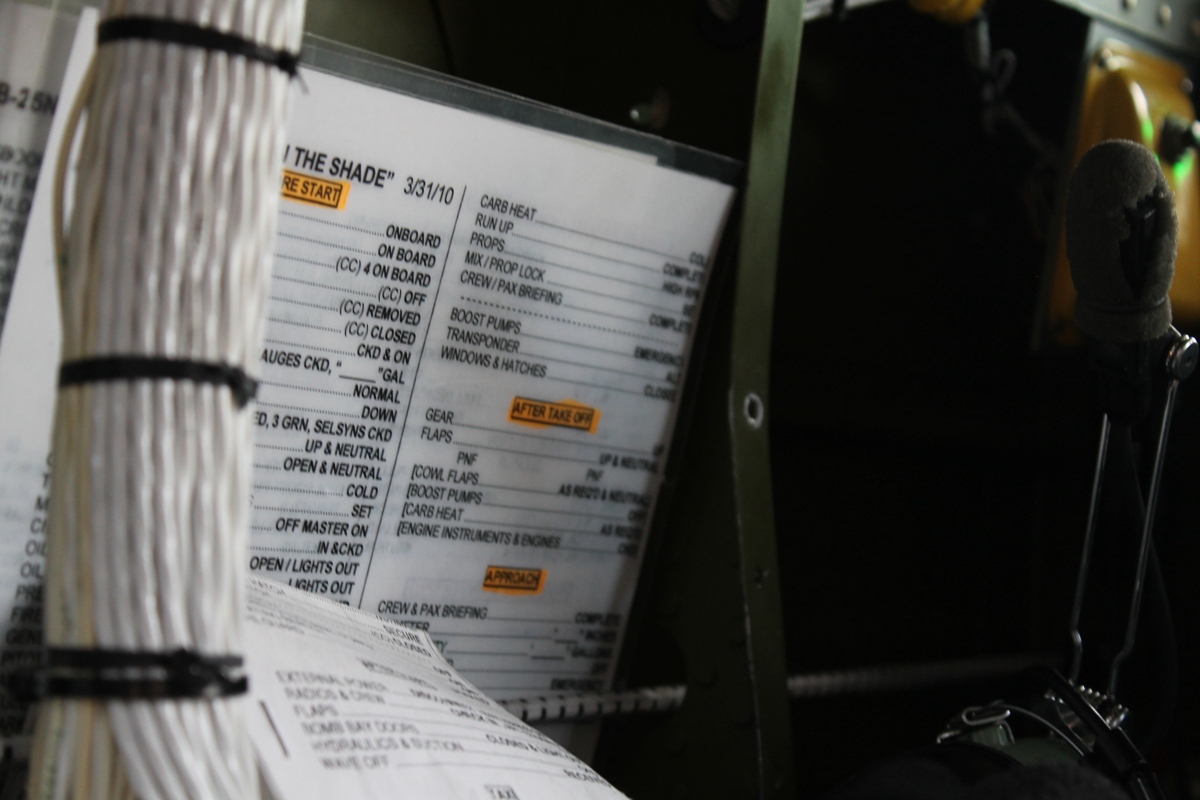 “Let’s see…sorry Captain, I don’t see ‘pop the top’ anywhere on my checklist.”

The engines started up fairly smoothly, for a 70-year old machine, and they were loud, even through the headphones. When idling, both engines backfired regularly – each “pop” sounding like a shotgun blast just on the other side of the thin metal wall. It was hot, too. Not only was the air heating up from the six bodies crammed together, but add in the Sonoran sun beating down on the tin can around us, no ventilation, and I swear I was getting a steady draft of hot air from the open wingroot at my side, and you’ve got one 3,400 horsepower aluminum sauna. 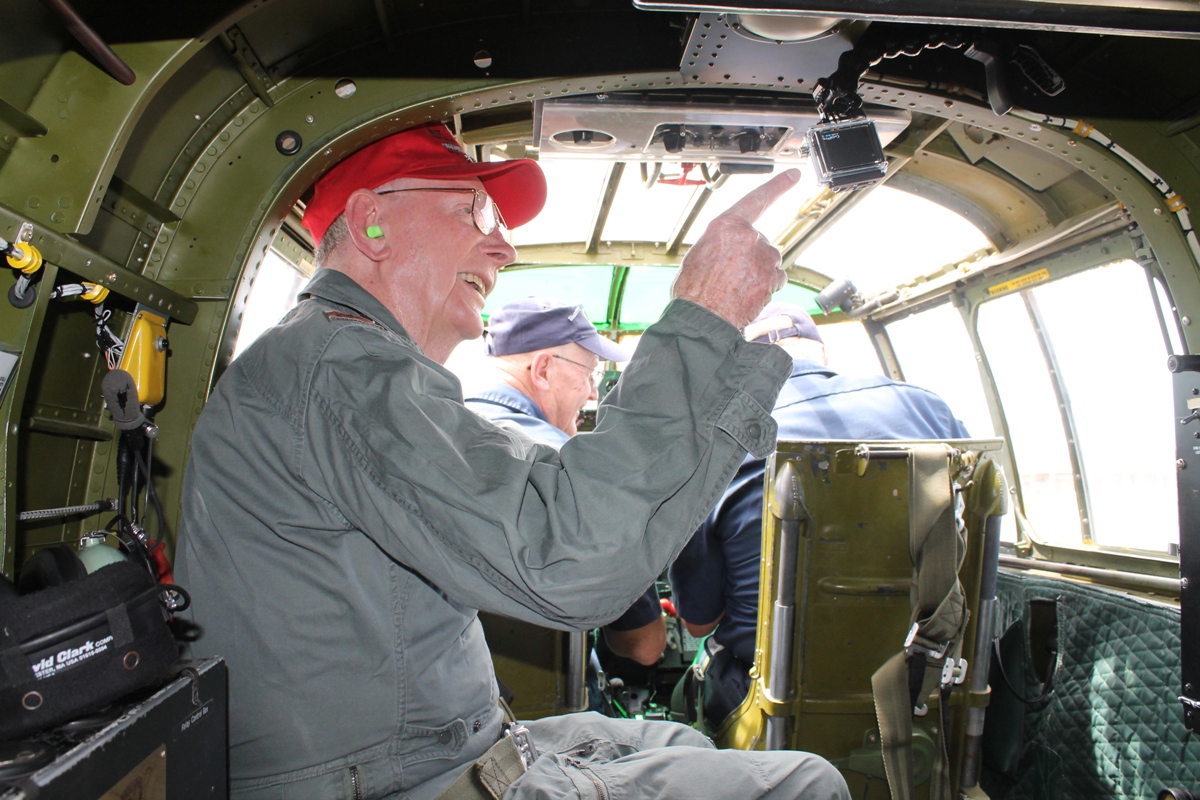 The Colonel pointing out my GoPro.

A takeoff in any aircraft is thrilling. A takeoff in an iconic warbird like a genuine B-25 is amazing. The view wasn’t all that great from my seat, but the sensory overload was intense. The rattle and pop of the engines smoothes out to an even thrum as they are finally unleashed, vibrating the whole aircraft in what must be a very familiar resonance. The aircraft smoothly surges forward, much more nimble than one would expect for a 70-year old “relic”, pressing me back into my seat. The musty smell of aged aluminum and cloth intensifies with the motion – not overwhelming but a strong reminder of the heritage carried around me. Lift off is imperceptible – I literally had no idea we were in the air until I saw the gear lights on the cockpit dash light up. No discernible bump, no stomach lift, just airborne. 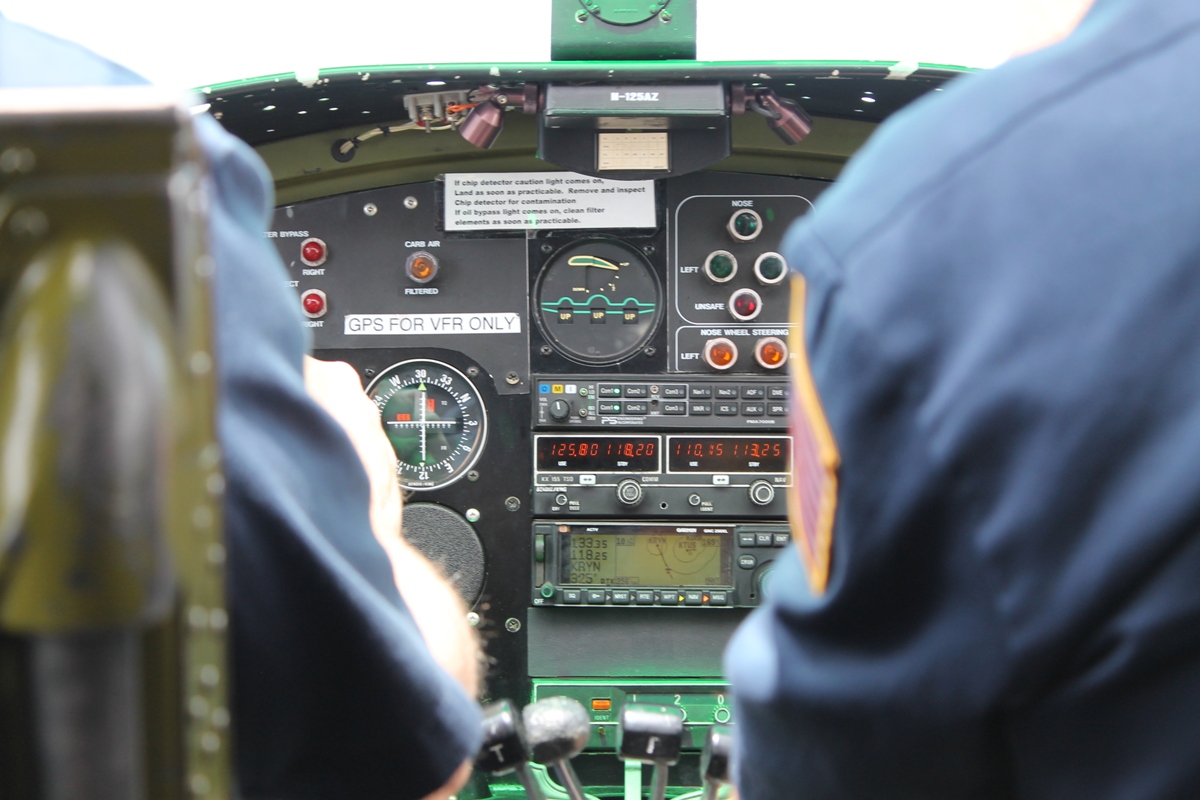 Most of the equipment in The Maid’s cockpit is new.

Not too long after takeoff, the flight engineer taps me on the shoulder and gestures towards an opening on the forward bulkhead just below the pilot/copilot’s deck. It’s the tunnel leading up to the nose gunner’s location. Without even an instant of hesitation I unfasten my seatbelt, grab my camera, and dive for the tunnel opening. 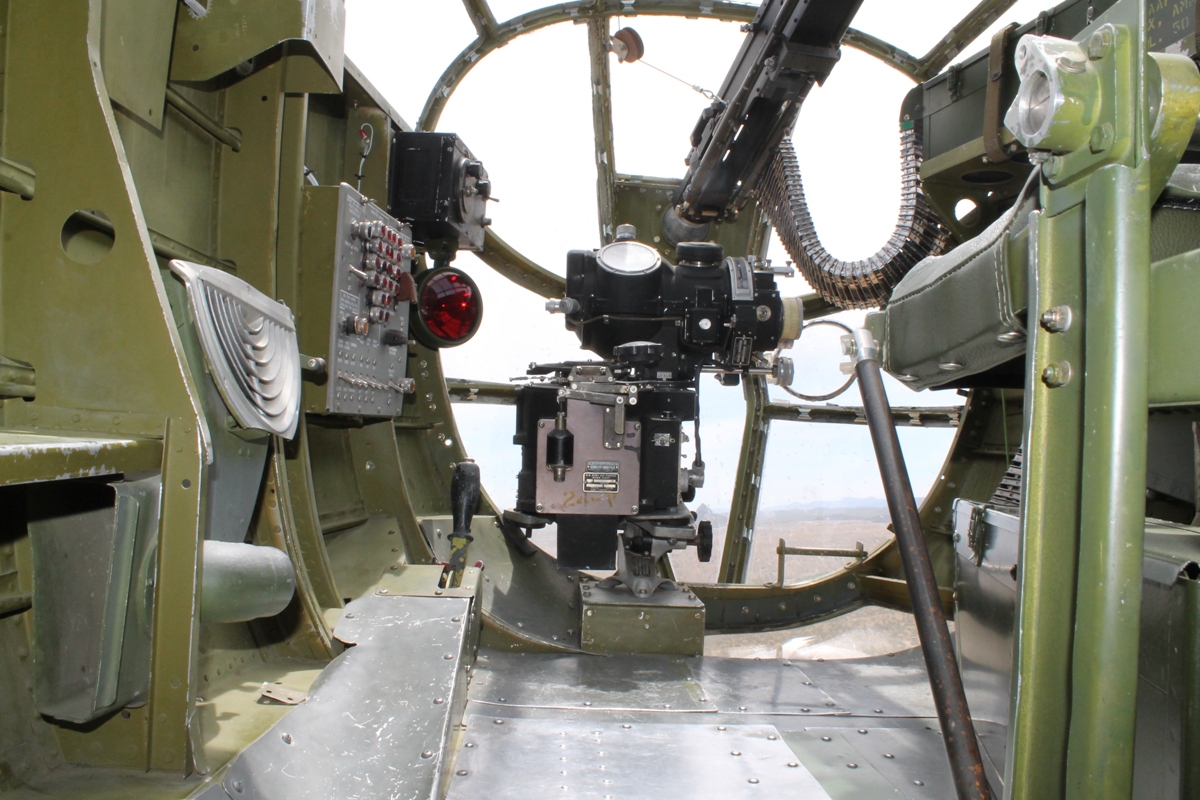 The view as you climb up the access tunnel to the bombardier’s station.

The crawl is tight, especially for an out-of-shape nearly-40 flight simmer, but I didn’t feel claustrophobic at all. Light was streaming through the opposite end of the tunnel from the greenhouse canopy. 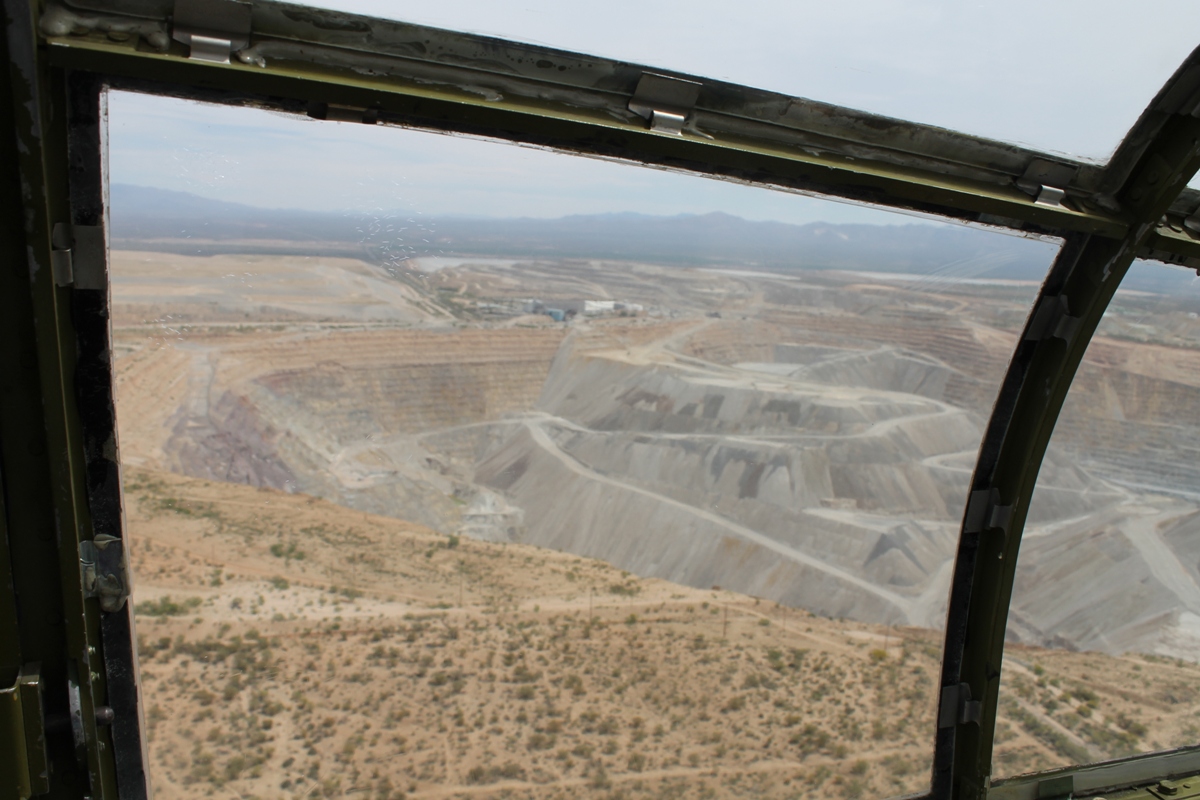 View out the left side of the forward station. 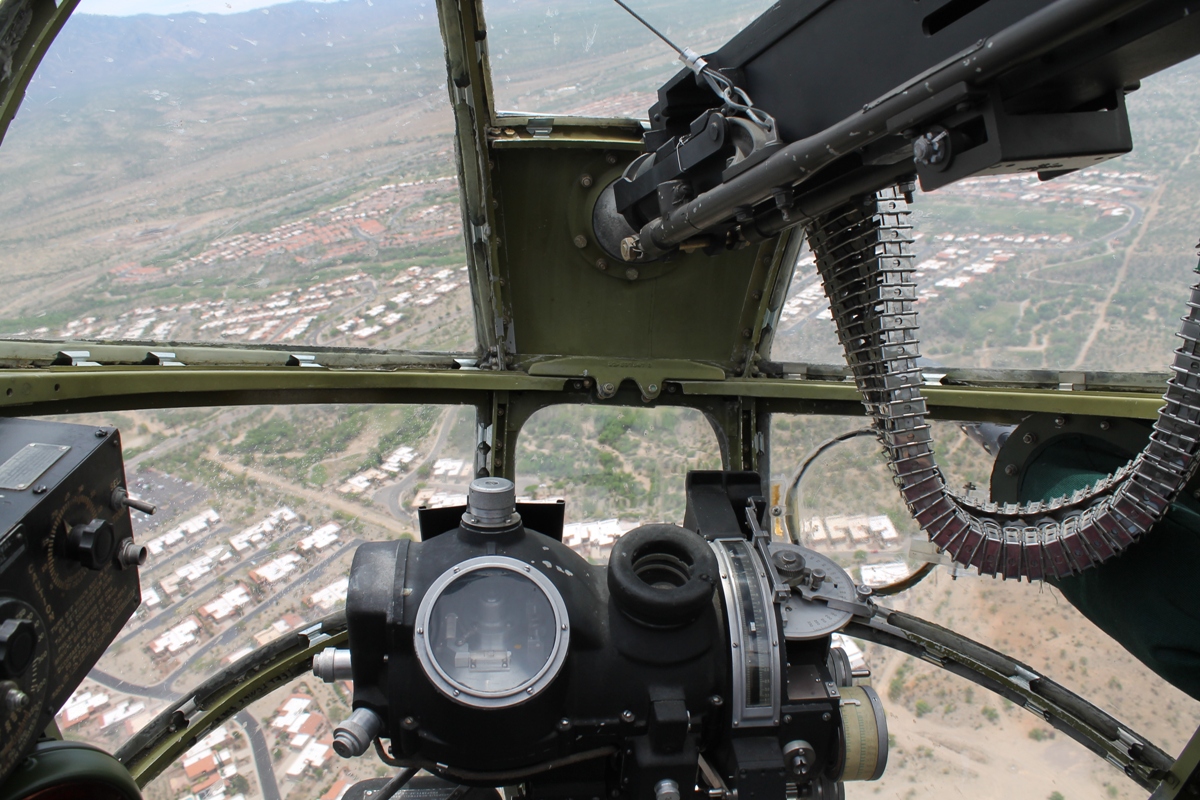 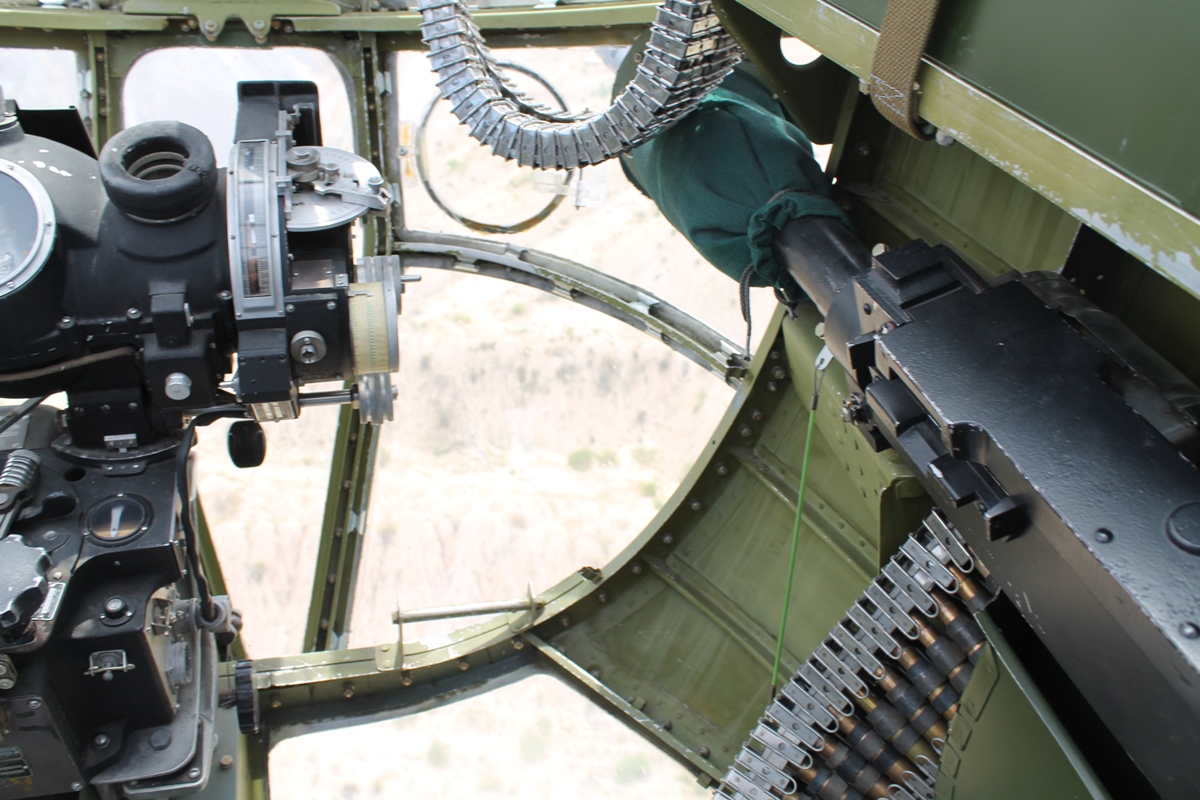 The Norden bombsight and fixed .50 are just two of the fun things to play with up front.

The view up front is amazing. I snapped as many pics as I could grab, but none of them really capture the experience. Coming from the cramped cabin, this open room was luxury…with a view!  Glass surrounded me giving me an amazing view of the sky and the desert scenery racing mere hundreds of feet below me. 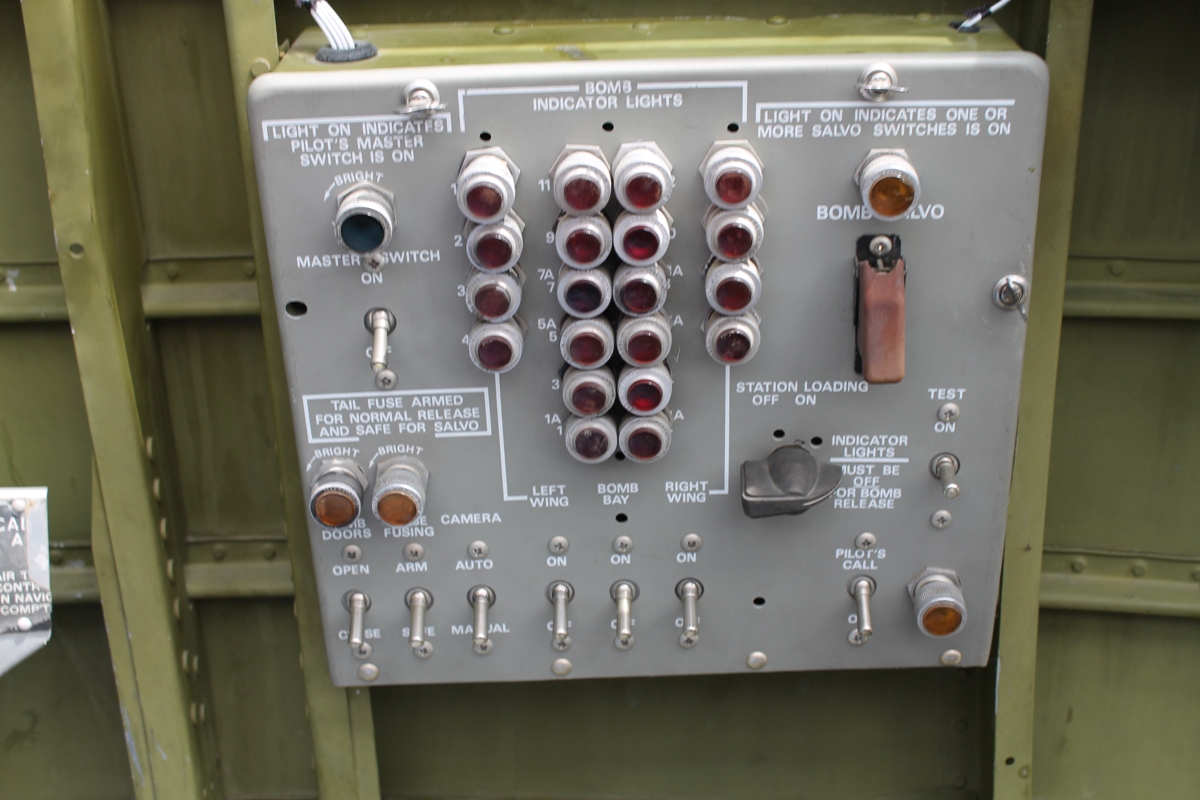 Flipping the switch on the right makes the pilot get really mad. 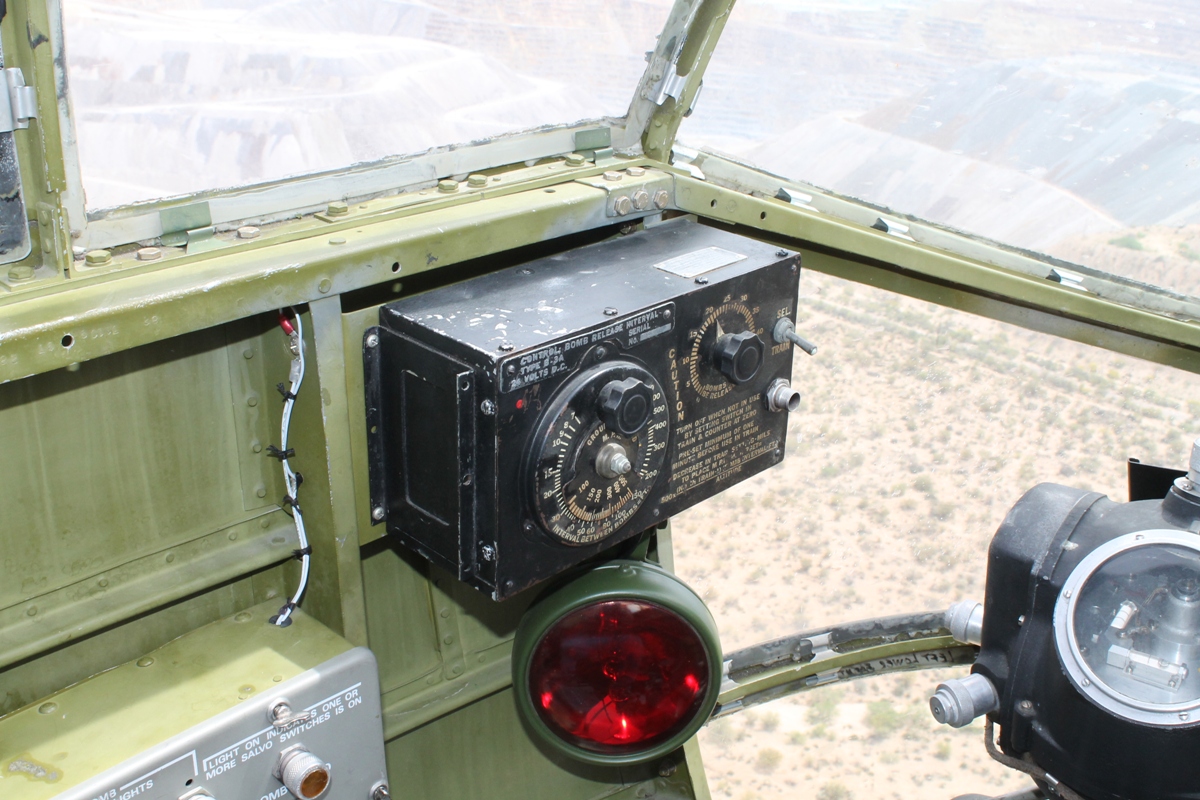 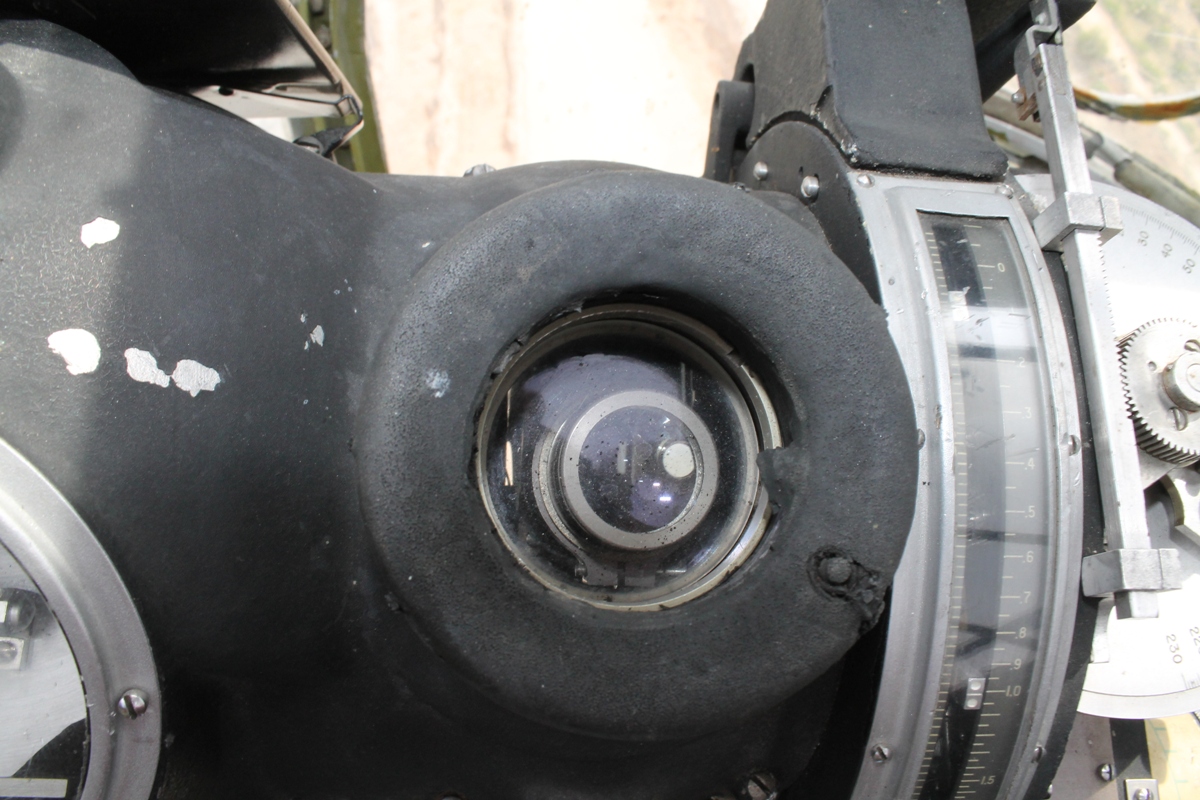 The Norden bombsight was mostly out-of-order, but the optics were quite clear. 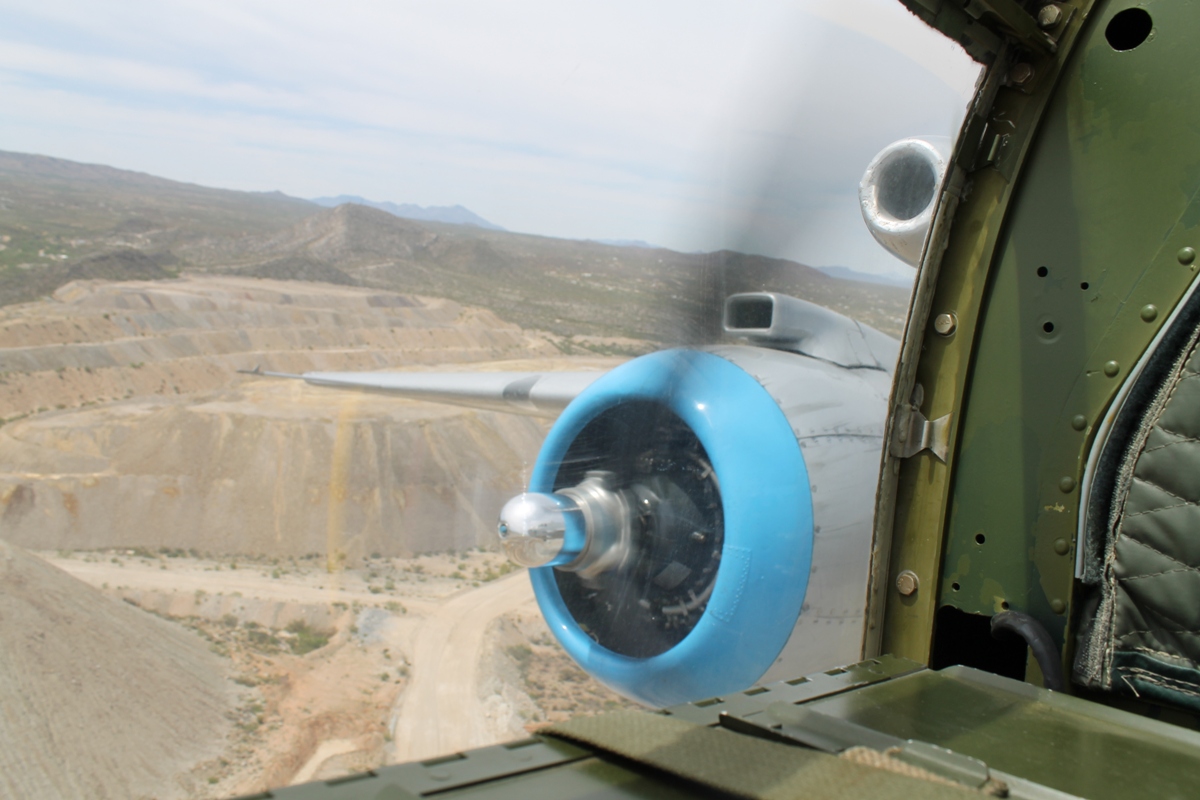 The B-25 makes for great scenic flights. Book yours today! 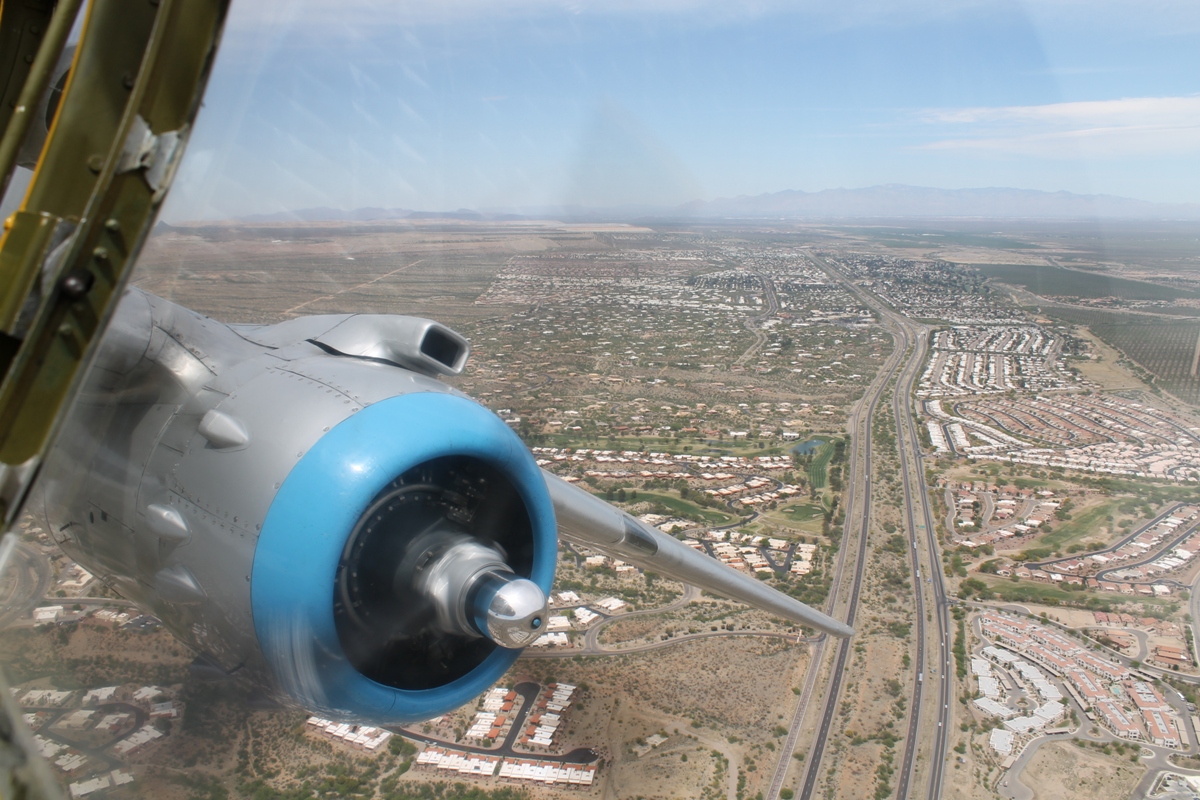 You can almost see my house from here.

The flight was short, but extremely sweet. The representatives from the Arizona Commemorative Air Force tell me that there are fewer than 30 B-25s flying across the world. Getting replacement parts is nearly impossible now, even for oft-replaced items like tires. I’m sure the last B-25 flight will be in my lifetime, and it’s rather humbling to have been able to take advantage of such an amazing opportunity. If you ever find yourself near Mesa, Arizona, the CAF offers rides in The Maid along with other warbirds, such as a B-17 Flying Fortress, T-6 Texan, PT17 Stearman, and others.

I’d also like to point out that the Disabled American Veterans sponsored our ride in The Maid today. I was able to speak a little with Lynn May, Kerry Ward, and Mike Jones from DAV about their organization and their goals. They proudly sponsor events like this and try to get awareness of their efforts to empower veterans to lead high-quality lives with respect and dignity. If you are a disabled veteran, or have a friend or family member who is a disabled veteran, check out their website – services and support may be closer than you think. 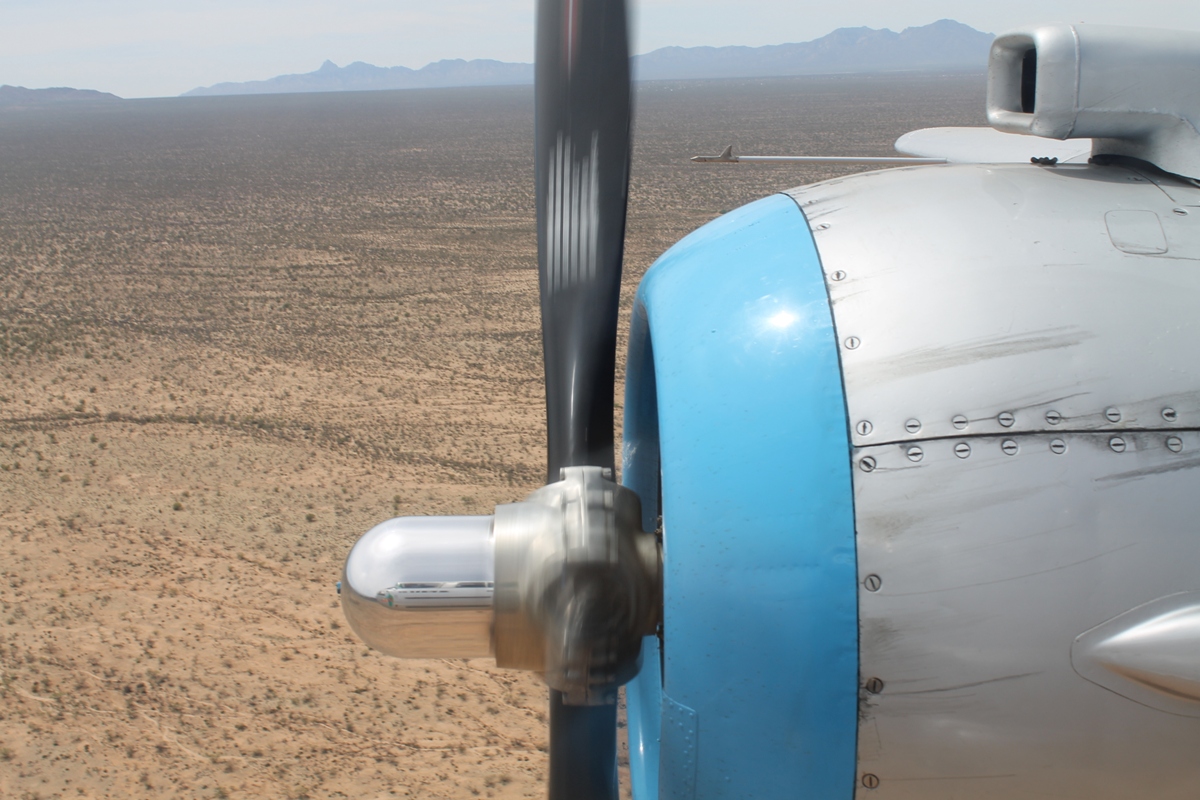 Discuss this article in our forums…