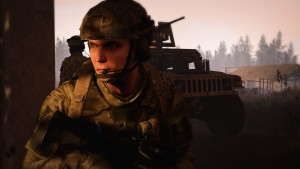 Every few weeks, Steam has a new flavor-of-the-month game that the Internet collectively praises for a couple days. Afterwards, the game that was so “great,” “unique,” “innovative,” and “the next big thing” usually sinks into its niche and goes mostly unnoticed by players at large. While games fading into obscurity isn’t anything new, it has become increasingly frequent in the wake of the Indie game’s explosion (among other events) of the late 2000’s. For better or for worse, the rise of Crowdfunding, Indie developers, and a somewhat schizophrenic mobile industry has left the gaming world drowning in content of varying quality.

Enter Steam’s newest darling: Squad. Offworld Industries is attempting to bridge the sim level gameplay of the Arma series with the jump-in-jump-out immediacy of the Battlefield games, but is Squad good enough to rise above a games industry saturated in new titles?

From Arma to Battlefield 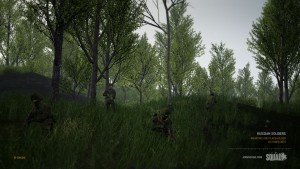 Now, from a writing standpoint, I’ve just asked the pertinent question “Is squad good enough…,” and the proceeding information should, ideally, address this question satisfactorily. However, as is becoming all too frequent, I’m talking about a game that is in, you guessed it, Early Access. Writing about a game in Early Access is often times like attempting to figure out if the meal you’re halfway through cooking is going to be delicious or not. You may have all the right ingredients to make a scrumptious dinner, but if your execution is off… you’ll be ordering take out, later.

On paper, Squad sounds like a pretty good idea: Inspired by the popular Battlefield 2 mod “Project Reality,” designed to blend sim and action elements, big 50v50 squad-based battles, and it has strong team-based gameplay revolving around communication. Anyone who has followed the Battlefield franchise over the years, has slowly seen it prescribe to the newer tenants of first person shooting, as made popular by Call of Duty. No, I’m not saying Battlefield is Call of Duty, but the popularity of the CoD franchise is so ubiquitous that it’s having an impact on most FPS games these days. Squad is hoping to grab folks who feel disillusioned with the popularity of twitch-based shooters, but don’t have the time/patience for something like Arma.

Overall, the blend of sim/action that Offworld Industries is shooting for feels pretty solid… so far. The “so far” part is really important… this is Early Access after all and anything could happen in the coming months.

When I was able to play Squad, I had a pretty enjoyable time. However, I ran into numerous connection issues and a persistent bug that kept me from respawning frequently. The only way to fix this was a hard restart of the game. I wasn’t impressed with the game’s “Training Mode,” which supposedly acts as a kind of tutorial, but doesn’t do that great of a job. Thankfully, Sqaud is not Arma so going in without much instruction wasn’t too much of a hindrance. This is also a good time to emphasize that, even though Offworld Industries is trying to bridge the gap between Arma and Battlefield, don’t go into this game expecting sim level quality or you’ll be a little let down. However, if you go into it expecting something closer to Battlefield, you’ll be pleasantly surprised by the sim elements. 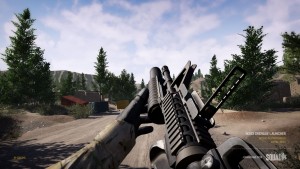 Squad, living up to its name, uses a class based role system (kits), but with a twist: some kits require two or more people to be in the same squad. It’s a neat mechanic, but will suffer from disconnecting players or players who simply drop the game (you lose your kit if they leave). There is also a kit limit per squad. Gear customization is pretty much limited to weapon sightings and attachments. While not a deal breaker, I’ve grown so used to deep customization that it was a bit jarring only being able to play with such a limited selection of options. 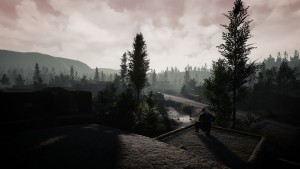 While not as fully featured or fleshed out as Arma (by design) the shooting mechanics and overall gameplay design hits closer to that of Bohemia Interactive’s sim giant than that of Battlefield. Squad aims to mix the two games’ designs and is doing a pretty solid job meeting that goal.

Conversely, abilities such as healing/reviving allies looks a bit silly and some of the spawning and deployables can be a little strange. However, being able to construct FOB’s (Forward Operating Bases) in which your entire team can spawn is a great idea. Creating these bases will take some forethought in regards to logistics, as teammates will need to assist in their construction.

When Squad wasn’t disconnecting me, I had fun 75% of the time. The other 25% of the time was either spent figuring the game out, dying to enemies I never saw, and/or rolling my eyes at teammates that were either as ignorant (but much more vocal) as me or trolls otherwise simply looking to annoy everyone they encountered.

As it stands now, I wouldn’t recommend Squad to everyone I meet. However, if you’re a fan of the idea of Arma, but prefer the immediacy of Battlefield then this game is literally being made for you. Playing alone is okay, but Squad really shines with proper squadmates. Sure, sometimes you’ll run into a group of great people playing together, but just as often you’ll run into the oddball that just likes to watch the world burn.