Being a PC gamer is a double-edged sword. Having so many options when it comes to hardware, software, and peripherals is great, but that also means double (or triple) the potential problems to deal with. Inevitably our gaming rigs will begin to slow down as newer gaming tech emerges that puts more and more strain on our systems before we finally have to bite the bullet and upgrade.

However, there are plenty of ways to extend your gaming PC’s life and get the most out of the processing power you have available. Furthermore, even if your rig is still in its formative years, many of these tips will help you gain even better performance for your beast. Some of these tips are common sense and some of them require a bit more knowledge, or at least the willingness to do some reading, but all of them should help make the most of your PC’s power.

Yes, I know… way to start things off with a bang, eh? The phrase “update your drivers” can easily elicit an exaggerated eye-roll from many veteran gamers but that doesn’t make it any less important. The big GPU creators, Nvidia and AMD, regularly update their cards’ drivers to support new features, optimize existing software, and perform routine housecleaning. All of us have that one friend who, for whatever reason, bought a gaming PC and has been using the same GPU drivers that came installed on the system. Often times this is… okay (I say that hesitantly) because they probably don’t notice the slow degradation in their system’s performance. As the months and years go by it’s easy to start blaming your PC’s age for your declining gaming experience, and while age probably is having an effect, if you haven’t been keeping your drivers updated that effect is going to be all the more pronounced.

Try to get into the habit of checking your GPU maker’s support page at least a few times a year. I know it’s a mundane task, and, chances are, you probably won’t even notice any performance increase, but trust me (and legion of graphic guru’s out there), it does make a difference in the long run.

Like GPU drivers, if you don’t keep your PC cleaned up overtime things are going to slowdown and start screwing up. That same friend who won’t update his GPU drivers probably has a PC full of crap that needs to be deleted. Remember that program you downloaded in 2010 to do that one thing you need to do? Did you remember to uninstall it? Remember that time you were browsing Reddit and before you realized it, you ended up on some, let’s just say, questionable websites? Did you scan your computer afterwards for malware/adware? Did you delete your cache/history/cookies? When was the last time you defragged your hard drive? Have you ever repaired the Window’s registry or defragged it? 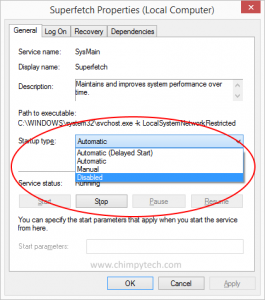 I’m sure you get my point. After years of owning the same PC, it can easily get infested with all kinds of benign, and possibly malicious, stuff that will start weighing you down. Fortunately, there are plenty of tools available to get your PC back up to speed. In fact, there are so many tools that it would be an article in and of itself to list them all. Even then I’d miss some niche tool that your cousin’s best friend’s brother uses on the advice of his wife’s sister’s good friend who works at [Insert Tech Place].

So, let’s just briefly look at the easy things you can do to quickly give your old friend a boost (Google is your friend):

No, I don’t get paid to mention Auslogics or CCleaner (or any other company listed here, for that matter). I decided not to include links, as I’m not advertising these two programs. I’m just suggesting them based on my own, personal, experiences with them over the years. Feel free to do some searching. There are TONS of programs to help you monitor what is on your PC.

There is one more key thing you can do to help keep your computer running smoothly, but it takes slightly more explanation than simple bullet points can provide.

Windows has numerous services which continually run in the background. Some of these services are necessary to keep your computer up and running, but there are plenty which are either extraneous or a bit pointless. You can switch most of these services off to squeeze out a bit more power from your PC. However, do be warned that you could mess some setting up that might interfere with your day-to-day usage if you’re not somewhat careful. I don’t want to discourage you from exploring these options, as messing with them really can give you some performance increases, but you do need to, at least, be aware of what you’re getting into.

Again, an entire article could be written on this topic alone, and again, Google is your friend. I’d suggest doing a quick search for your Operating System version and finding some of these articles. However, once you’ve found a list of Windows processes someone suggests you deactivate don’t just blindly start clicking things it tells you to click. While it is unlikely that you’ll run across a troll article which suggests you turn off very important services, it is likely that one of more of the processes someone suggest you turn off might be something you actually use. In short: make sure you’re not turning off something you want to use.

Examples of some Windows services/features that gamers frequently turn off, include:

There are many, many more “features” which can be disabled to improve your PC’s performance. Do a little reading then decide what you do and don’t need, but again, don’t just blindly follow someone’s instructions.

Also within this category of housekeeping would be Internet Optimization. However, like randomly turning off services as mentioned above, fiddling around with Window’s Internet settings is something you can screw up if you don’t know what you’re doing. So, I’m not really going to touch on it, other than telling you that there are some Internet settings to tweak which might help your overall ping/connection. 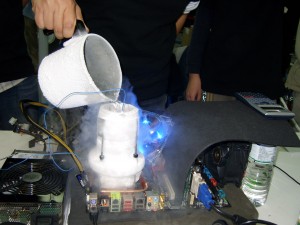 You probably won’t need liquid nitrogen for your overclock…

In the past, overclocking (OC’ing) was a thing that only those “in-the-know” could safely do. While it is still something that requires a bit of Googling to figure out, it can be much, much easier for your average gamer to pull off these days. In fact, many gaming motherboards now come with built in settings that allow you to OC with a few simple clicks. Also note that not all hardware can be easily overclocked. This is often referred to as being “Voltage Locked.” So, if you see this phrase in regard to your specific GPU, for instance, then OC’ing your card is probably out of the question. That said… there are ways to get around this lock, but if you’re new to dabbling in all of this, stay away from these workarounds. They can be a bit complicated and will probably void your warranty if you try.

For the uninitiated, overclocking is simply increasing a components clock rate (usually your CPU or GPU) to force it to run at a higher speed than it was designed to run. “But Lee… isn’t that dangerous?” Sure, it can be if you do something really silly, such as pushing an obscene amount of voltage through a component. If you do that… prepare to go buy a new CPU/GPU. However, the basic settings that something like an Asus motherboard supplies probably isn’t going to do that. These modern OC settings exist for the average gamer to turn on without having to go through all the fuss of manually OC’ing a component. Manually OC’ing will probably net you a better speed increase to power ratio, but unless you’re really into that sort of thing, you can just stick with the basic settings.

So, how exactly do you do a simple overclock? Well that depends on what you’re overclocking. If you’re OC’ing your CPU/GPU, I’d highly recommend you do it via your BIOS. However, there is software you can download to OC directly from your PC’s desktop. What’s the difference? Well, in a nutshell, software overlocking is generally less efficient as it overestimates the voltage required for the overclock.

In order to access your BIOS, you’ll need to reboot your computer and hit either the correct F-Key or Delete to load the BIOS screen up. Once you’ve successfully entered your BIOS, you’ll need to navigate to the correct menus and enable the OC setting for your board. These menus will all be different depending on your motherboard maker/version. I know I’m sounding like a broken record, but again, Google is your pal and will help you track down exactly what you need to do for your specific motherboard. Frankly, if you’re not willing to do some of your own homework on this… I suggest staying away from it.

If you’re not willing to do your homework, or if the idea of changing BIOS settings makes you wary, then you can opt for software overclocking.  This method is as easy as downloading an appropriate program and clicking a button or two. Again, it’s not quite as efficient, but for small time OC’ing, it’ll do the job just fine.

What software can you use? Well, there are a number of popular tools out there, but these handful are generally the most commonly used and trustworthy:

In part 2, we’re going to look at even more ways to get the most out of your gaming PC.