The ever popular WOFF saw its content upgraded to Version 3 in the past weeks, and naturally the update brought with it many changes and additions to the tried-and-true formula. Developer OBD Software wasted no time in patching and tweaking V3, bringing about another round of rapid updates which has cumulated in the release Version 3.8 this month.

As always, each WOFF patch includes the previous patches content – no need to download multiple patches. However, you can check out the complete list of Version 3 updates, right here. And, as always, feel free to stop by the forums and check out the goings-on of the community at large. 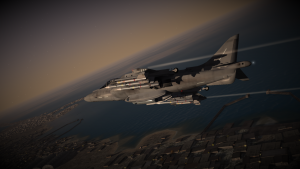 After a long time coming, developer Sim155 has finally launched the first version(s) of Combat Air Patrol 2. For those of you who may be unfamiliar with CAP2, we did a very brief look at the game, here, but now that the Harrier Jump Jet sim is out in the wild, be sure to check back for a more detailed look at the sim at a later date.

Briefly, CAP2 features an accurate and functioning model AV8B II Harrier Jump Jet, dynamic open ended campaign, strategic and tactical gameplay, and a wealth of simulated systems – such as civilian traffic shipping lanes. All of this is set in the geographically accurate terrain of the Straitz of Hormuz, where players can explore over 250,000 km2 of navigable space. While the game will incorporate some multiplayer aspects like Fleet vs Fleet and Campaign co-op, the initial launch will be focused on the Single Player game.

Current work is focused on mission waypoint assignment, HUD/MFD navigation displays and wingman control together with bug fixes and feature requests from the forums.

You can check out the previous updates, here, as well as the Steam page right here. Unfortunately, I haven’t had time to get my hands on the release, but as soon as I can spend a good amount of time with it, I hope to get a more robust post up about this release.

Well, it’s been a little over four weeks since Battle of Moscow has been available to anyone who had pre-ordered. While still technically in the Early Access phase, 1C looks to be moving forward in great strides. The initial launch had a minor issue with the patching process, but it was addressed pretty quickly and has been relatively smoothing flying ever since.

While you’re waiting for the full-on release, check out the latest update information, here. 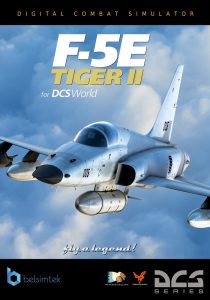 Eagle Dynamics announced in recent weeks that, in cooperation with Belsimtek and The Fighter Collection, the DCS: F-5E Tiger II would be available for Early Access this July or August. Currently the F-5E is available for pre-order at 20% off – $47.99 USD, and features a six-degrees-of-freedom cockpit, fully modeled weapon system, accurate flight modelling, with a full set of training missions to be created while in Early Access.

The F-5E was developed by Northrop Corporation in early 1970s. The light tactical fighter is an upgraded version based on previous F-5A developments. The F-5s’ combat role encompasses air superiority, ground support, and ground attack. Given its mission flexibility, ease of operation, and low cost, the Tiger II has, and continues to server, air forces across the globe.

The F-5Е is armed with two 20-mm М39-А3 cannons with 280 rounds per each cannon. The cannons are located in the nose section, forward of the cockpit. Special deflectors are used to avoid compressor stall conditions caused by hot gas ingestion as a bi-product of operating the M-39-A3. Each cannon is capable of firing at a rate of 1500 to 1700 rounds per minute.

You can check out the F-5E Tiger II, right here.

Well that’s it for this quick round of updates – check back soon for more on these games and others!