Yesterday, Valve announced that Skyrim would be the first game that allowed mod makers to publish and sell their own content through Steam. As you might expect, this news was greeted with a hurrah of happiness; however, after details of the deal emerged, a somewhat more hesitant Internet began to weigh in on the issue. If you love gaming and mods then this is a topic you’ll want to keep an eye on, as it could have a number of consequences, some good – some bad.

Some of you may be wondering why this is news at all, considering Steam Workshop has been allowing mod-makers to earn money for a while now. The previous process was somewhat more convoluted with only a select few games being voted on and then having developers integrate the content into their games. With the most recent change, modders are now able to set prices for their mods and sell them to other users. Naturally, this is only allowed for games that have given the go-ahead to Valve. Skyrim, which it should come as no surprise, is the first game to allow the new feature. 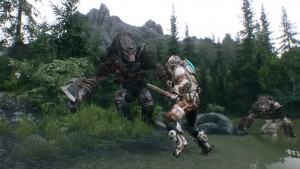 On the surface this change seems like a great direction for the gaming community in general. Great mod makers get rewarded for their work, and, in theory, are able to continue to produce great content for users thanks to a new stream of revenue. After all, most mod makers hold down steady jobs and have busy lives like all of us, so anything that could potentially help give them more time to practice their hobby is a win-win for the community at large. (I say hobby for lack of a better word. Make no mistake, many modders approach their craft with much more zeal and skill than your average hobbyist)

The Steam Workshop FAQ has already weighed in on this eventuality:

While you are, thankfully, able to refund a mod within 24 hours, no questions asked, this is basically a non-answer which translates to “not our problem.” Anyone who has modded a game (especially big games like Skyrim) knows that you are 100% going to run into an issue like this at some point. Right now, it’s no big deal because the majority of mods are free, and while it can be a pain-in-the-butt to track down and fix/discard a broken mod, at the end of the day all it cost you is a little time. However, in the future it might also cost you money. By extension, this issue also brings accountability front-and-center. Currently, if a game has a bug, we, as gamers, are reasonably assured of some manner of bug fix by the developer. With paid mods, the mod creator would be held accountable, however, that creator is under no obligation (even if it does serve their interests) to fix any problems. Granted, there are too many examples to count of times where retail developers release a broken game and never fix it. Ironically, it’s usually up to the community to fix the problem, which brings to light an entirely new issue: What are the ramifications when a broken game is “fixed” thanks to a paid mod?

While these kinds of alarmist questions deal with murky “What ifs?” that may never evolve into any problem of consequence, they do deserve to be monitored closely, especially by the community at large. We all know that big gaming companies would like nothing more than to monetize mods in such a way that gives them the most payoff. They are businesses, after all. Even the much beloved Valve has come under some fire from this most recent announcement. Mod-makers only take away 25% of the revenue from their mods earnings, while steam takes the other 75% – it’s still unclear how much of this percentage is kept by Valve or what is done with the money. This revenue disparity has angered many people in the past 24 hours, however, DayZ creator, Dean Hall isn’t one of them. At a glance, the 25-75 split seems ridiculously unfair, but once you take into account a variety of factors, which Dean expertly addressed, the split begins to make a bit more sense.

From Dean Hall’s view, the split makes perfect sense because:

If I approached Bethesda to make a derivative game, using their tools, assets, IP, distribution – I would not get a 25% revenue split (I would get less). If we want professional modding, which is what this is, then people cannot apply emotional arguments – they need to apply business arguments. Therefore the split needs to be considered based on value. The parties to the arrangement are Valve, Bethesda (as the publisher), and the creator. Valve, understandably, probably want to maintain the same arrangements they always get – it’s the store split that you compared in your article to the Apple Store. Bethesda have their own costs, and they take the rest of the split – based on the value the IP has and their contributions to tooling, their risks and opportunity cost losses (DLC, etc…). Let us imagine that they are getting something like 30-50% of the transaction – I would say that is a reasonable cut based on: value of the IP, Risks/opportunity cost, provision of tools/documentation. (Forbes.com)

Regardless of your stance on the monetization of mods, it is a topic that demands close scrutiny in the coming months, as new issues, questions, and business models are bound to begin cropping up everywhere. Undoubtedly, there will be success stories, failures, and fraud all over the place, but as this business model evolves, it will unquestionably have an impact on all gamers, hopefully for the best.