I so, so, so wish I was here to make a “Get in tha choppa!” joke. That is about the level of cleverness that I can bring to the table. Since I am being denied my moment of comedy brilliance, I will instead put my glasses on and go “Clark Kent” all over the article.

War Thunder is currently in open beta and has recently launched patch 1.41. While there are a few visual updates and optimizations, as well as a few changes to ammunition and ballistics, I think its is easy to say the big news here is the addition of ground forces available for all players in the open beta. 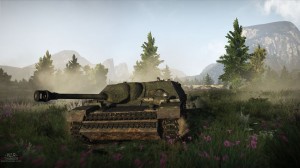 There are metric tons (literally, if my guess is right) of new ground forces to jump in. Just keep your eyes on the skies. For a full list of all the new planes,  and tanks check the posting here.

USSR and German tanks are the only current options and in most cases the game mode will only work as tank vs. tank. In some testing fighters will be added, but don’t expect that as a permanent fixture just yet.

There are also a number of changes that are probably not all that important to the regular user, but again, you can find a full break down of everything that has changed in this patch in the link above.

Now get out there and show those USSR tanks what the Germans can do!