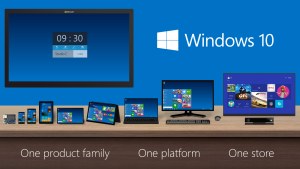 By now most people are familiar with the Windows release cycle: one good, one bad, one good, one bad, and so on. If history is any indication then this should mean that windows 10 will be “good,” since Windows 8 has been almost universally despised, at least by PC gamers. With Windows’ seemingly predictable cycle coupled with Microsoft’s announcements over the past few months, things are certainly looking promising for Windows 10 (or X or 9 or whatever you want to call it).

So, what’s exciting about Windows 10?

For starters, it’s going to be a free upgrade for Windows 7/8 users within the first year. No, it isn’t a subscription. That scare was started due to Microsoft’s poorly worded announcement which made it sound like the OS would be free “for” the first year, rather than free “within” the first year of its release. This is an important step because the gaming community has been largely fragmented, with many using W7, and some using W8, and still others only using Xbox One. I include the Xbox in this gathering because W10 will also be playing a big role on Microsoft’s console, which should come as no surprise. Given that PC gamers are already somewhat fragmented by their hardware (which is as it should be – even if it does sometimes make life difficult for developers), having non-Linux and Mac gamers unify on one operating system is definitely a step in the right direction. Now, whether or not a free upgrade entices enough people to switch is an entirely different matter.

All Windows 10 machines will have a preinstalled Xbox app which promises to provide a gaming hub for Xbox gamers and PC gamers alike. On top of this, Microsoft has announced that cross-platforming gaming is a focus for W10. In other words, MS want PC gamers and Xbox gamers to be able to play the same games together. Despite how you feel about this unification, it’s a major step for the industry that could herald a number of changes in both hardware and software. For instance, Sony will, and is undoubtedly already, taking steps to provide their own cross-platform connectivity. If, and right now it’s a big if because the tech is unproven, Microsoft is able to deliver a cross-platform experience, developers would have to keep this fact in mind while designing their games, particularly multiplayer. A successful cross-platform experience would send ripples to all corners of the gaming world, and start a slow, but fundamental, shift in how we enjoy our game time.

Another set of Windows 10 specific gaming upgrades are Game DVR and Game Streaming. A current issue with recording and sharing gaming clips is that great moments almost always happen unexpectedly, and if you’re not recording, the moment unceremoniously comes and goes. Windows 10 plans to address this by giving us the ability to press the Windows Key + G at any time to bring up a menu which allows for the saving of the last 30 seconds of gameplay. Given the rise of communities like Twitch, and the general popularity of game streaming/sharing, this feature is sure to please a large segment of people.

Microsoft’s next OS will also give players the ability to stream Xbox One games to their Surface enabled devices.  Meaning, any game installed on your Xbox will be playable on your PC/Windows 10 device from anywhere with a connection. To fully grasp the possibilities of this feature, imagine you’re out on a business trip, or maybe you’re a student visiting home for the holidays without your trusty Xbox One. In this scenario, if you have a tablet and Xbox One controller with you, you could link up and play from anywhere. Of course, this kind of tech always sounds amazing, but in practice, it usually falls short. However, let’s try to stay somewhat optimistic and hope Microsoft can deliver.

Finally, Windows 10 brings with it DirectX 12. Your excitement about DX12 will probably be directly proportional to your love of shiny graphics. While I don’t mean to downplay the significance of DX12, until a large enough segment of the population has DX12 enabled hardware PLUS Windows 10 developers will be hesitant to take advantage of the new features it brings to the table. That said, you can guarantee that a few years down the road video games will be looking better than ever, and with the advent of Oculus Rift (and other emerging VR tech), the future is sure to look stunningly beautiful. More importantly, at least for me, are the performance benefits that DX12 promises to bring. With better multi-core/threading support, DX12 hopes to give you as much as a 50% boost to performance. Again, I’m sure that number is a bit overly hopeful, but time will tell.

So, what do you guys think? Are you going to take advantage of the free upgrade, and do you think Microsoft will be able to deliver on its promises?