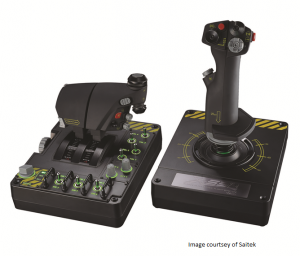 I had some time with Tim Di Iullo from Mad Catz to discuss the upcoming  Saitek X-55 RHINO H.O.T.A.S. System. You’ve seen our announcements and there have been various questions on the forums as well.  Keep reading below for an inside scoop on this upcoming product.

Tim: Yes, that is the plan. Eventually all our HOTAS devices will get the new programming software, but we wanted to launch the X-55 Rhino with our new all powerful software to demonstrate our dedication in delivering the most cutting edge hardware and software combination.

Ken: What features will these brand new programmable drivers have?

Tim: All the powerful programmable features you would expect are included: button mapping, macro commands, timed commands, mouse emulation, banded axis, etc. But in the hardware settings column we have now added dead zone adjustment, saturation adjustment, and axis response curve adjustment so you can really dial in the sensitivity of your HOTAS. These are all brand new features and have all been designed in house from scratch and whilst these features can be very complex we believe that we have come up with a GUI that all our users will be able to use and interact with.

Ken: Will the new programmable drivers allow the controllers (stick, throttle and pedals if applicable) to be mapped as a single device for older games that don’t support multiple devices?

Tim: At launch no, but this is something we are working on with all our controllers, we like the idea of being able to place multiple controllers into one group and the user programming that group as a single controller.

Ken: Will these programmable drivers also include the Proflight Panels, as well the rest of the Saitek Controllers so that they too can be programmed for flight simulations other than FSX and X Plane? 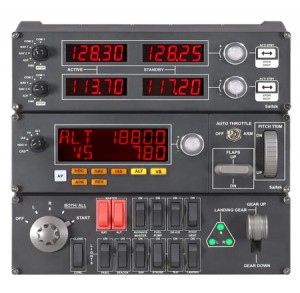 Tim: Currently the software has been developed exclusively for the X-55 RHINO but we are planning on expanding to include all of the products in our Pro Flight range.

Ken: Are there going to be scripting capabilities to allow for multiple uses for an axis, button, hat switch, or toggle switch?

Tim: Absolutely. Furthermore, the X-55 RHINO has 3 modes, meaning each button can be programmed to output 3 separate events at the flick of a switch. So, for example, you can program the Rhino so that in Mode 1 the A button is a standard button press, in Mode 2 a macro button, and in Mode 3 an advanced timed command. Same principle applies to the hats: in Mode 1 it could be a 4 way hat, in Mode 2 an 8 way hat, and in Mode 3 it could act as a mouse. The axes can be banded, which means they can be programmed as a button programming or they could emulate a mouse.

The limits for programming software are only defined by each end user. The profile could just contain 12 basic button commands or it could contain 132 unique commands comprised of basic buttons, macros, timed, banded axis and hat commands.

Tim: We’ve got some projects cooking right now and we’d like to say thanks to the flight sim community on the forums, Facebook, and Twitter for your passionate suggestions. We honestly consider each and every one of them. Right now we’re very pleased with the progress we are making on our bespoke Saitek cockpit that will allow pilots to modularly build out their home flight sim cockpit piece by piece, panel by panel. We’ll have more information on this soon. As for the other projects, we’ve got some obvious ones and some not-so-obvious ones in the works and we remain dedicated to our vision of being “all things Sim.”

Ken: Can you give us details on the features of the X-55, design inspirations, product goals, and what is most significant about this new product?

Tim: We wanted to create a military-style HOTAS that is high quality but wouldn’t cost you the price of a brand new gaming console. We also wanted to make it highly customizable with plenty of programmable buttons and rotaries to accommodate even the most hardcore of sims. One of the things we hear the most is about the tension in the throttle and the stick. So for the throttle we placed the tension adjustment knob on top and just to the left so it’s a breeze to access. For the stick tension, we went completely out of the box on our thinking. There are so many varying opinions in the flight sim community on what the tension in your stick should feel like. Why not give the pilot the ability to change the spring out and put in a completely different spring? Or no spring at all, for all the helo pilots out there? And that’s how we came up with the F.E.E.L. spring system which allows you to easily swap springs out until you find the one that feels just right.

Ken: How do you view the health of the flight sim genre (or the racing sim genre), and also how they view the future for PC gaming?

Tim: The flight sim genre is starting to pick up again after some down time. These things tend to be cyclical, but Microsoft kind of threw the community a screwball by releasing Flight and then discontinuing support so soon after launch. So many people kind of went back to Flight Simulator X but now with the strides being made by X-Plane 10 and Prepar3D 2.0 we’re really starting to push the limits of what our PC gaming hardware can do.

Combat sims like Digital Combat Smulator continue to grow as do the Massive Multiplayer action games like World of Warplanes and War Thunder. Then there’s also the Phoenix-like rebirth of the space sim Star Citizen pushing PC gaming even further. A game like that practically demands that higher-end controllers like a HOTAS be used for full immersion. A mouse and keyboard just doesn’t cut it once you’ve flown with a stick.

Tim: We are always reviewing and analyzing the simulation market place, when we say simulation we mean the whole simulation world not just flight. PC is our predominate platform at the moment, but we’ve always got one eye on new platforms and opportunities.

Ken: The site advertises multiple spring tensions that can be changed to suit the user.  What spring tension selections are they?

Tim: The RHINO X-55 includes four different color-coded springs of different lengths ranging from 36mm to 52mm. The longer the spring, the more tension in the stick and you can really feel the difference in stiffness. One the best features of the spring system is that you can actually use “no-spring” which makes the stick completely loose, but great for flying helicopters.

Ken: I’ve read that the spring design allows the spring to wear into the base of the stick.  Has there been, or will there be a “fix” for this on the X-55? Or, is this in fact even a problem?

Tim: One of our greatest strengths is our build quality. This of course has knock-on effects, one of those being that all our products last a lot longer than we anticipate. Some of our products have been in the market place for many years. Take the original X52 for example, this was released in 2004: if you have one of the initial units you could be using a product that is 9 years old! It is inevitable that it will have a little wear and tear. Having said that we have yet to see an example of the spring wearing away the spring cone and we would be interested to hear from anyone who is having this problem. You can always reach our tech support at http://support.madcatz.com and we’ll try our best to sort out your issues.

Ken: How closely are you working with simulation developers like 777 Studios and Eagle Dynamics to create scripts that correspond to the real aircraft used in the game? Is there the ability in the software to switch between aircraft — like the A-10 and F-15 in Flaming Cliffs 3 — without having to reprogram the entire controller?

Tim: Regarding the ease of switching between different aircraft profiles, it couldn’t be easier. What our software allows you to do is to create different profiles where you can really tweak the settings to reflect individual aircraft, save these profiles, and then switch seamlessly between those profiles with just a couple mouse clicks in the system tray.

We do have good relationships with most of the businesses and communities in the flight simulation world, for most of the scripts we will make them ourselves and post them onto our website for the community to download. Naturally we also encourage our end users to send in their profiles to us so we can share them with the rest of the community as well.

Ken: It looks like from the pictures that there might be an option to remove the joystick from the base. Are there considerations for possibly creating different stick types to replicate different aircraft controllers?

Tim: The joystick is removable from the base; this is how you would access the spring. We are exploring the viability of creating different stick types. If that’s what the community tells us that is what they are looking for, then we’ll do it! You heard it here first folks!

Ken: Given the relatively narrow market for high end stick components, what is it about the X-55 that will make it stand out in comparison to competition from Thrustmaster, Logitech, or even CH Products?

Tim: We really think we found a perfect middle ground of quality and price point while still being able to address some nagging concerns that the community has had about our joysticks. The wider bases, the new programming software, the F.E.E.L. spring tension system … we believe we’ve created a HOTAS that will last a long time and be perfect for any application.

Ken: What would be the best reason for someone, like me, that has been a CH user for 15 years, to switch to the X-55?

Tim: Well, we would never ask the community to have to choose between two brands and we get that for most people, “if it ain’t broke, don’t fix it.” We do feel though that sims and PC gaming hardware specs are only getting more powerful, sophisticated, and innovative and the X-55 RHINO reflects this by improving and setting the new standard for customization options, precision accuracy, versatility, even ergonomics. So if you’re looking to get a new HOTAS look no further.

Pre-order for USA and CAN at http://www.saitek.com/uk/prod/x55.htm