Bohemia Interactive has released the second part of their Developer Diaries which aims to give a bit more background information on their Marksmen DLC for ArmA3. Check out our look at the first diary right here. The newest diary takes a look at the new showcase scenarios, training courses, firing drills, virtual garage, the new End Game multiplayer mode, and some experimental multiplayer systems.

Since the showcase scenarios are shorter, standalone missions, they’re used to show off some of the new tech being brought into the game. The new single/multiplayer scenario is one that expands on the firing from vehicles mechanic introduced in the Helicopters DLC. Bohemia Interactive are also including some new VR training and Firing Drills in Marksmen which allows users to see just how the new weapon mechanics (resting/deployment) are being integrated into the existing weapon mechanics (recoil, inertia, shifting). 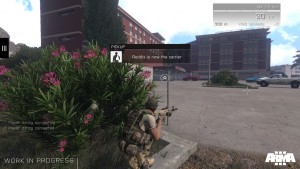 Lastly, the new End Game mode will introduce players to a new multiplayer mode, along with some experimental new mechanics. End Game is all about teamwork and quickly completing objectives to beat the other team. At the start of the match, each team must set up their on base of operations and then begin tackling Intel missions. Once a team reaches their Intel max, the “End Game” is triggered and sees the team with the most Intel fighting to upload a schematic while the opposing team fights to stop them or steal their schematic and upload it themselves. From the developers:

Within a pretty small territory, you and your team can pick various assignments to try and finish. It’s a dynamic mode which allows you to get closure fast. Either a great win, or at least a fun loss.

End Game introduces three new experimental mechanics: Revive, Shared Objectives, and Dynamic Groups. Revive is straight forward enough: It eliminates the need for respawns and forces teams to work together. Shared Objectives similarly puts more focus on teamwork as mission tasks can be assigned, tracked, and completed by multiple group members. Dynamic Groups add to this by allowing members to leave, join, and create new groups at will.