If you’ve been checking SimHQ regularly then you’ll be familiar with our coverage of ArmA 3 Marksmen. Now that the long awaited DLC is finally out, it’s time to take a practical look at all the hype. First, I’ll take a look at the free features, and then we’ll examine the paid features of the new update.

This is, without a doubt, the core feature of the Marksmen DLC, or at the very least, the longest awaited addition to the game’s toolkit. Sure, there have been mods since ArmA 2 that have tried their best to implement similar features, but they never worked quite as fluidly as the developers own interpretation available in Marksmen. 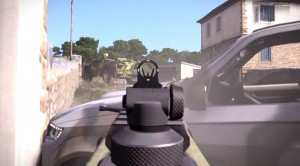 Weapon Resting on an SUV

Out of the two new ways to rest your weapon, the more passive approach is by far my favorite. It only took ten minutes into the DLC before I realized my general approach to movement (and even strategy) was already being altered. I found myself thinking: Where can I go to get solid cover, positioning, as well as great resting potential? The answer to this question? Almost anywhere! Weapon resting works at just about any height. Low walls, high walls, narrow windows, etc… All of these places now present new opportunities for setting up a strike point or defensive position. Without experiencing it yourself, it’s hard to tell you exactly how radically this one, very simple, feature can drastically alter your gameplay approach. What’s greater is that snapping into a resting position, as indicated by a box outline in your stance frame, is smooth and seamless. While in the resting state, your weapon stability is increased, although you still have to control the reticule a good amount, as you should.

The only caveat to Weapon Resting was the fact that on some low walls (and once on a higher wall) I had an awkward time getting into the resting stance. This was particularly noticeable in Stratis, but even then, I was able to rest my rifle after a bit of tinkering with the camera angle. I’m going to go ahead and assume that there are other places with similar issues that I simply didn’t run into. A mechanic like this is bound to have some odd implementation at times, seeing as how it was added into the game rather than being a mechanic that was present at the game’s inception. 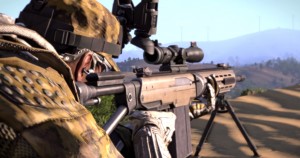 Now that I’ve swooned over Weapon Resting, let’s take a look at Weapon Deployment. I’m mainly a rifle toting, bullet slinger so I found the bipods a little cumbersome, but as soon as I switched to sniper rifles, I gained a new appreciation for the feature. Attaching a bipod to your weapon of choice gives you a fantastic new sense of stability. Don’t misunderstand, however, the game doesn’t go into arcade mode. In fact, the devs have managed to maintain a solid feel to a weapon’s recoil, even while rested/deployed. Bipods are a bit of a double-edged sword, which should come as no surprise. While deployed, your field of view is narrowed but your accuracy is improved thanks to better handling. For those of you who like your sniper rifles and special weapons, you’re definitely going to be altering your playstyle for the better in Marksmen.

While the VR training courses can definitely help out old hands relearn or refresh their skills, it’s definitely going to be more beneficial for a new player to check out these courses. For a completely brand new player, I suggest you take a look at the basic classes which show you how to aim, lead, and pick the right weapon. It’s too bad this wasn’t in the game when I first played ArmA 3; it would have helped me a lot. 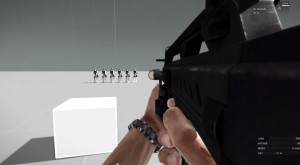 The reason why ArmA veterans might want to consider going back and relearning the weapon mechanics is that they’ve changed in Marksmen. As the DLC’s name suggests, Bohemia Interactive have paid a whole new level of attention to weapon handling. No longer are you going to try to clear a room with a machine gun. Short barreled guns now actually feel light-weight while longer barreled guns, or guns with attachments, now feel weighty and somewhat cumbersome thanks to a slower reset time. The attention to detail is pretty inspiring. Each and every gun in ArmA 3 now has a distinctive feel, and if you’re like me, you’re going to spend hours training to find that one special gun which feels perfect in your avatar’s capable hands.

If you’re willing to pay an additional $16 then you get access seven new weapons, ghillie suits, scopes, remote designators, firing drills, and a new reconnaissance Showcase.

Most interest will probably be in the new weapons which consist of:

The AMS and Kahlia are both medium range scopes which can be used on new and old weapons. The Ghillie Suits (which work great for snipers) consist of NATO, CSAT, and AAF variants. The new Firing Drills are focused on mid-ranged movement in three new Purple Courses of Fire. Lastly, the new Showcase brings the features of Marksmen together in one, sweet package to test your abilities.

The new weapons are what you’d expect from the ArmA 3 devs: detailed, unique, and versatile. Of particular note are the Russian weapons (Kir and Cyrus). These two rifles are thoughtful additions to an already bursting arsenal. The Kir feels almost like a mortar and can be quite difficult to zero, but delivers a very satisfying feeling once you finally get the hang of its quirks. The Cyrus sounds really powerful and is pretty accurate, not to mention pretty to look at. I found myself favoring it out of the other seven new weapons introduced in Marksmen.

All-in-all, Marksmen is a solid DLC choice. I still haven’t gotten to spend much time in the new End Game multiplayer mode, but from what I’ve seen, its focus on cooperation and teamwork is sure to get your blood pumping. Bohemia Interactive has managed to walk the fine line on which the concept of DLC is ever teetering. Some developers and publishers (you know who I’m talking about) don’t understand, or don’t care, that DLC should be additional content that enhances an already great experience, not “patches” to “fix” broken games or meaningless fluff to rake in more cash. I’m happy to say that Bohemia Interactive is not one of those developers. Their dedication to their fan base is admirable, and that dedication shines through in the Marksmen DLC and free platform update.

Order of Battle: Pacific – Coming April 30th to PC
Week in Review and the Battlefront Reveal