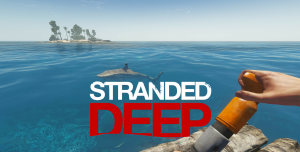 If you haven’t heard of Stranded Deep, you’re not alone. Released on Steam’s early access channel this past January, BEAM Team Games, the Brisbane, Australia based team behind the game, have been quickly making a name for their survival based endeavor. After spending some time with the early access version (at the time of this writing that would be version 0.02), it’s easy to see why the game is gaining so much attention.

The scenario isn’t anything new: After a plane crash, you’re stranded in the middle of the Pacific Ocean and must use your wits and meager resources to survive. Despite the rather mundane 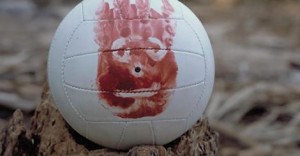 premise, the games feature set (what’s currently in the game, and what’s planned for the future) definitely creates a draw that anyone who enjoyed Cast Away or Lost will feel. Resource management, crafting, and a realistic health system are just a few of the major features that help give the game its identity. On top of this, the Stranded Deep features fishing, “advanced animal AI,” and an open, procedurally generated world with which the brutal realities of nature will take its toll on your character. From the developer:

And if this hasn’t gotten your attention yet, BEAM has also announced its desire to include a co-op mode in a future release. 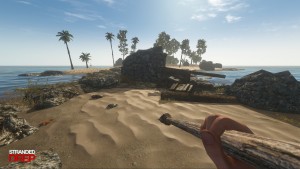 It’s 2015, so no one should be surprised that such a small developer can create such a beautifully crafted world. The vast ocean and landscapes in Stranded Deep feel quite lonely and provide a great sense of atmosphere that lends itself to exploration. Coupled with the fact that each play through uses a procedurally generated world, there is potential for a good amount of replay value in Stranded Deep.

The first thing I noticed is just how similar the game feels to The Forest, which isn’t a bad comparison by any means. After the intense intro (which is more than a little reminiscent of BioShock), I quickly found myself on a little island with nothing but a handful of items which clearly weren’t going to sustain me for long. Luckily, I soon found a branch and a nice looking rock, but without anything to tie them together, I had to set off to another island. During my trek I ran into a shark who was more than a little friendly. I was pretty convinced I had done something wrong and would die, but after being bumped around for a while by the shark, I finally made it to another island by sunset. As the darkness settled, I abandoned my search for something to tie my rock and stick together and instead built a fire. This was done, as all crafting is, by bundling items next to each other on the ground, in this case, the sticks, and then I pulled out my lighter and boom, I had a fire.

At this point, I knew I should try to find something to cook, and as luck would have it, I found some crabs scurrying around the shore. After I had stabbed a few with my knife, I brought them over 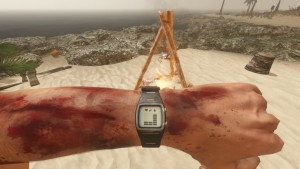 and cooked them using the fire. Stranded Deep boasts a fairly realistic health system that utilizes a calorie-based nutrition system and stamina management. Cooked food, along with picked fruit, will spoil over time, and drinking salt water is definitely not a good idea. On top of this, the weather impacts your character. You’ll need to seek shelter during the day, and warmth at night, or suffer the consequences. You also can’t count on the helpful starter items to sustain your play through. Items like the knife and lighter will degrade and become useless after a time, necessitating the crafting of other tools. Also, I didn’t discover the usefulness of the watch your character wears until an hour into my time with the game. While by no means realistic, I’m a sucker for immersive UI design, and the watch perfectly fits that role. As you’d expect, you can use it to check the time, but it also monitors your health, food, and water levels.

Apart from survival and crafting, there are also a number of underwater treasures that can be salvaged from sunken ships. During my second or third trip underwater, I managed to find an axe. I then proceeded to chop down every tree in sight. Shortly after that, I discovered you could uproot Yucca plants which gives you access to Lashings (aka rope). Soon, I had gathered enough materials for a small shack (foundation, supports, walls, and roof). As luck would have it, at least I think it was luck and not a scripted event, I completed my shelter right before it started to rain. 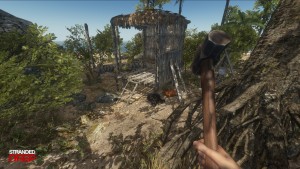 While I sat in my hut, I admired the beautiful weather effects which added yet another layer of immersion and atmosphere to a game already doing an admirable job of sucking me in. Stranded Deep boasts a realistic lighting system, atmospheric fog, bloom, god rays, ambient occlusion, depth of field, and most, if not all, of the popular graphical trappings which are so integral in creating a beautiful looking game.

My brief time with Stranded Deep definitely left me wanting more. The game is clearly still in early access, and I ran into my fair share of oddities: strange shadows, or no shadows at all, an awkward animation here and there, and strange shark behavior were just a few of the ones that stuck out. The crafting system, while displaying a ridiculous amount of potential, is a little limited in the game’s current incarnation but at version 0.02 that’s forgivable.

If you enjoy survival sims and like the idea of becoming Tom Hanks for a couple hours, I definitely recommend, at the very least, looking into Stranded Deep. As the developers progress, and the full game beings to take shape, I have little doubt Stranded Deep will gain even more attention. And if BEAM Team Games continues to deliver the same amount of care they’ve already shown with this early version, that attention will be well-deserved.