The weather is glorious. Our meteo officer pours glasses of tea and as usual I munch cucumber slices as he briefs us. “Sacha, the cloud base is at 1,700 meters, visibility with haze, about 50 kilometers. Broken clouds. Wind, 5 meters/second at ground, seven at 2000 meters, nine at 8000 meters.”

“There will be turbulence with those wind speeds, and in the mountains.”

I flip the top up on my gold Chaika watch, and see that it is time to board. Overlord, the American AWACS, will be waiting for us and soon the GAZ jeep will come to pick us up. When we take our places, I scan my cockpit, in my No. 11 aircraft. All is in order. The crew chief signals, and I start my left, then right engines, and close my canopy as I hear Vasily’s jet, No. 12, start as well. We listen in on Guard as we taxi, and roll down the runway for a formation takeoff.

Set Condition 1-SQ for surface action. General quarters, general quarters! All hands man your battle stations! The alarms begin their shrill ringing as the crew of the battlecruiser run. In its nerve center, a bearded officer peers into an orange-lit radar screen and checks his watch. “The Turk is too close this time, Dmitri Alexandrovich. I will teach him to be more cautious in the future. Weapons free, you may fire when ready.”

The cruiser Moscow shudders as first one, then another SS-N-12 missile roar out of the starboard launch tubes, dropping booster jets into the sea as they pitch up into launch attitude. Some fifty kilometers away, the Muin-I-Zaffer and her consort have a bone in their teeth and are steaming for a confrontation. They had no idea that the Russian Navy was playing for keeps, this time.

The Turkish ships react slowly, and Zaffer’s consort pays for it with the lives of one hundred and forty sailors. Three Standard SM-2 RIM-66 missiles miss the incoming sea-skimmer, but with luck, the one following it, the one meant for the Zaffer herself, is intercepted. The first, however, impacts the other ship, setting her afire and bringing both Turkish ships to a halt.

But Moscow cannot rest. In her Combat Information Center, a new threat is on screen.

Overlord is calling. A pop-up threat, at the Turk airbase. Their F-5s have scrambled. Vasily wants to fight them. “One, permission to engage targets!” 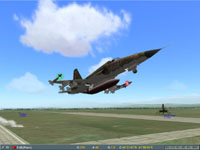 “No, Vasily! Stick to the plan, let the Navy have them, but be vigilant. Watch them on the American Link-16!”

I bring up DVB mode and select R-77. I flip my radar on and off to initialize the Link to the E-3, just in time to see the Turk aircraft turn to face me. They are out of radar range, but now I have established the Link 16 with the Americans. Our noses are cold like the Borzoi dog in winter, and yet I can see everything he does from nearly 100 kilometers away. But the Turk, he does not close! The hated F-5 spins like a child’s toy!

On Moscow, her VLS cells on the stern spit fire to the launch of two SA-N-6 missiles as her crew cheers wildly. So far, one Turkish ship is dead and now, two aircraft may join her at the bottom of the Black Sea.

A LOMAC Mission Report: Turn Their HAWKs Into Scrap!

A LOMAC Mission Report: Turn Their HAWKs Into Scrap! Page 3

A LOMAC Mission Report: Turn Their HAWKs Into Scrap! Page 4

A LOMAC Mission Report: Turn Their HAWKs Into Scrap! Page 5

A LOMAC Mission Report: Turn Their HAWKs Into Scrap! Page 6

A LOMAC Mission Report: Turn Their HAWKs Into Scrap! Page 7