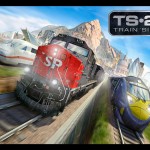 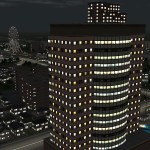 The Train Giant: A-Train 9 & Shanghai DLC Part 2 - Gameplay Commentary By and large, the flow of gameplay is quite straight forward once you know what you are doing. The menus and dialogs are functional and generally didn’t feel like they were in my way. There are a few elements that seemed bothersome though. I’ll briefly comment on each. A variety of entertainment for […] 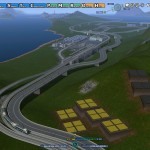 The Train Giant: A-Train 9 & Shanghai DLC Part 1 - The Train Giant: A-Train 9 & Shanghai DLC by “adlabs6”   Introduction The origins of the “A-Train” software line go back to 1985. Developed by Japanese developer Artdink, and through it’s history published globally by various companies with versions on platforms as diverse as the PC, consoles, and handhelds, the series has maintained a steady following. The […] 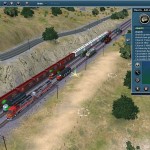 Trainz Simulator 12 Part 3 - World and Scenario Editors As mentioned, the included “Surveyor” editing module allows players to create, edit, and save both scenarios and entirely new routes. I created a few basic scenarios to explore the module, and was able to easily place trains car by car, exactly as I wanted. Building a few consists along the sidings […] 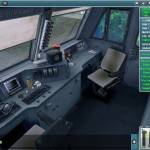 Trainz Simulator 12 Part 2 - Gameplay – Experiences The majority of my gameplay time was spent in the various scenarios within the “Sessions” menu. Most of these scenarios are very approachable in their presentation, though this doesn’t mean they are all easy. Starting up a scenario offers the choice of DCC or Cab Control, and from there usually opens with […] 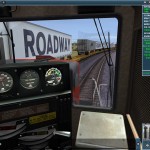 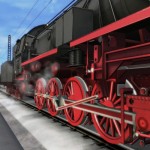 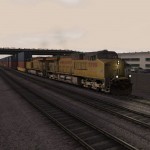 Train Simulator 2012 Part 4 - A long haul freight train leaving the railyard. Graphics Commentary In this segment I’ll talk about how Train Simulator 2012 looked at a variety of settings, share some comments about performance, and anything else I noted along the way. Shadows One of the most visually exciting graphics update for me, are the dynamic shadows. Even on lower […] 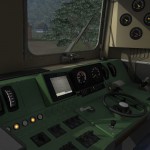 Train Simulator 2012 Part 3 - Sunlight rakes across the controls in the cab of a locomotive. Technical Updates Train Simulator 2012 offers its most visible updates in the graphics department. New graphical elements include a new lighting system, a new shadow system, and visual details like rain on locomotive windows. The options menu screen allows players to dial a variety of settings […] 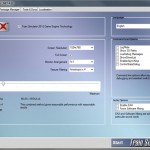 Train Simulator 2012 Part 2 - Interface and Presentation Train Simulator 2012 sports a new menu design, which is simple and straightforward to use. Also new is an interactive loading screen. This screen serves as a sort of “billboard” that will display a slide show of new or upcoming DLC add-ons. It also has a series of buttons beneath the slideshow screen […] 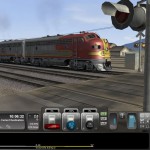 Train Simulator 2012 Part 1 - Product Version 5.9d by “adlabs6” The EMD F7 Warbonnet rolls through a crossing. Cab Control overlay system is also shown. Introduction Train Simulator 2012 is the sequel to Railworks 2, by Railsimulator.com Ltd. This update is free to current owners of Railworks 2, and like Railworks 2 before it, is a Steam based product. For those wondering whether this free update […] 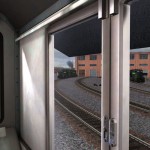 Train Simulator 2012 Performance Review Part 2 - Other trains and scenarios greatly benefit from the new look as well. The real issue came with the technology demonstration scenario, Horseshoe Curve. As “adlabs” mentions in his review, this scenario contains a lot of the new bells and whistles that is new in Train Simulator 2012, but all that “ooo” and “aah” brings my relatively well-heeled […] 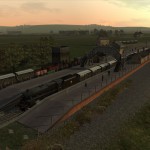 Train Simulator 2012 Performance Review Part 1 - Product Version 5.9d by Erik “EinsteinEP” Pierce   As a newcomer to the train simulation genre, I was quite excited to see that my gateway sim, Railworks 2, was getting a major upgrade to Train Simulator 2012, and it is going to be free! I was already very pleased with theRW2 product and had spent many hours happily shunting cars […] 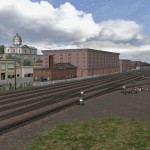 Train Simulator 2012 The Horseshoe Curve Expansion - Product version 5.9d by “adlabs6” Introduction The Horseshoe Curve is a famous railway curve near Altoona, Pennsylvania. Completed in 1854 by the Pennsylvania Railroad (PRR), it solved the problem of trying to get trains over the peaks in the Allegheny Mountains. Its value to American shipping was such that it was targeted by the Nazis in […] 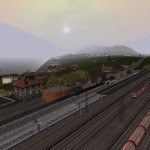 Railworks 2 Review Part 5 - Closing Comments Before I close out my review of this product, there were some difficulties that I encountered that I’ll comment on. The difficulties I experience were few, and none prevented my enjoyment of the Railworks 2. Firstly, my Steam client needs to be run with Administrator privileges for Railworks 2 to work. This was not at first […] 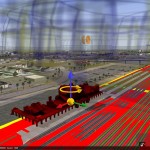 Railworks 2 Review Part 4 - Graphics and Sound Visually speaking, Railworks 2 succeeds at building a convincing and lifelike world. While the graphics could be argued to be off the cutting edge, they are certainly very detailed. The trains are for the most part beautifully rendered, and feature nice reflective effects on the exteriors, animated drivers (when viewed from the exterior), and […] 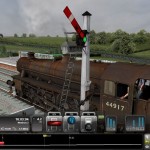 Railworks 2 Review Part 3 - Gameplay – User Interface The literature for Railworks 2 presents gameplay with the phrase “Be the Driver”, where the player will face the challenges an engineer would while operating these locomotives. The user interface includes what is called the “Cab Control” system, the 3D clickable locomotive cockpits, and the keyboard. In addition, the controls can be operated […] 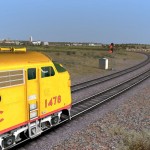 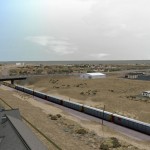 Railworks 2 Review Part 1 - by “adlabs6”   A freight train rolls through a spot of life in the desert. Introduction What is Railworks 2? Railworks 2 by Railsimulator.com Ltd, is an expandable “base package” railroad simulation. Offered as a free update to current owners of the original Railworks, the product is also available for sale on Steam and DVD media. The original Railworks was a 2009 […]