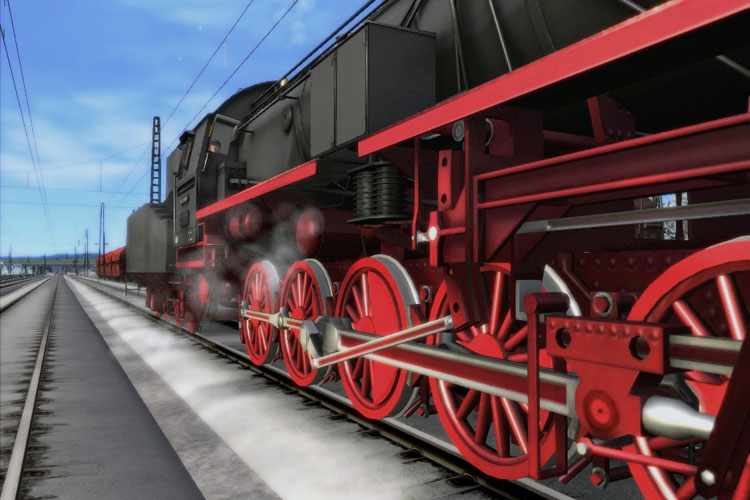 Ice and steam… Both “Depth of Field” and “HDR Bloom” are demonstrated in this shot.

On the Train Simulator 2012 Launch Window, under the “Settings” tab, is an option for toggling the “TSX” technology in Train Simulator 2012. Disabling this option disables the vast majority of the new visual updates, in exchange for a performance increase. Advanced shadows, lighting, and rain on the windows were all disabled in my testing. The player inertia simulation did remain, however.

The amount of increased performance varies with the scene. For example, on some of the tracks originally included with Railworks 2 my performance would easily double even with all the options set to the very highest settings, and running “MLAA + MSAAx4”. On more dense routes, such as the Horseshoe Curve expansion, my performance increase while not using “TSX” was still notable, though not quite as great.

The visuals while not using “TSX” appear to be very similar to what I experienced with Railworks 2, which is not all that bad. For upgrading players who are happy with the current Railworks 2 visuals and performance, this option is something to explore.

Since I am looking to demonstrate the new features of Train Simulator 2012, I used “TSX” for all of my review and screenshots.

Given my PC’s performance abilities, I wanted to look for a point where I could enjoy some of the new graphical updates, and still have decent performance. I was able to do so, but with some very dense scenes, I would choose to drop the AA and AF to improve performance, and with the densest scenes I’d choose to disable the high quality shadows, and either go with no shadows or “blobby” shadows instead.

It’s give and take. My PC gives me a better result than I expected, overall. I do realize that the words “decent performance” will mean different things to different people. For reference I’ll quantify them as a frame rate between 18 to 25 or so.

For those with more modern systems, fellow SimHQ staffer Erik “EinsteinEP” Pierce has written a supplementary piece describing his experiences on his higher spec’ed PC.