First thing to note: VRS custom keys will override all Microsoft Flight Simulator mappings when active.The VRS TacPack’s Superbug does have assignable DDI Push Buttons 1-20. There are also assignable UFCD keys. If you do enable these options the FSX mappings normally assigned to those key presses will be overridden by the VRS Superbug software. 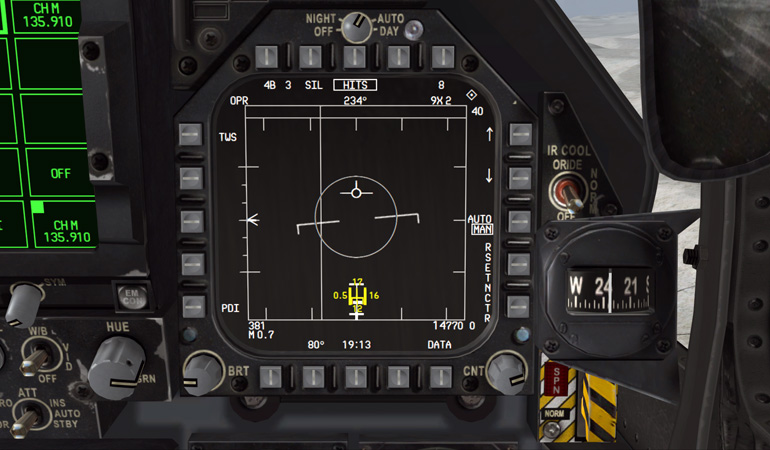 The push buttons work, but watch the remapping. 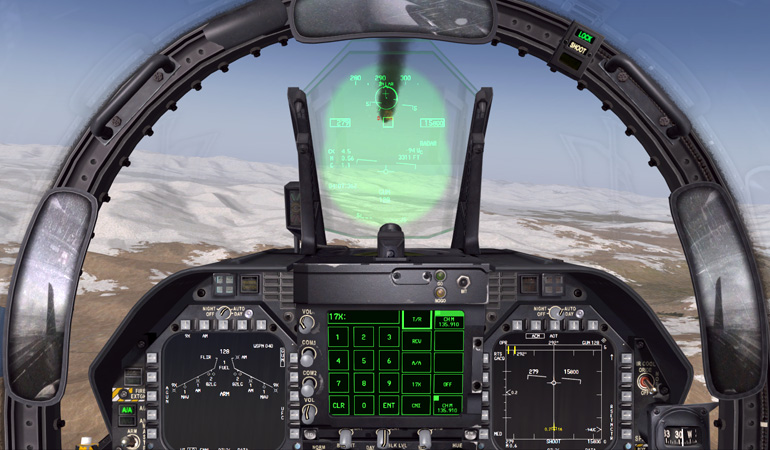 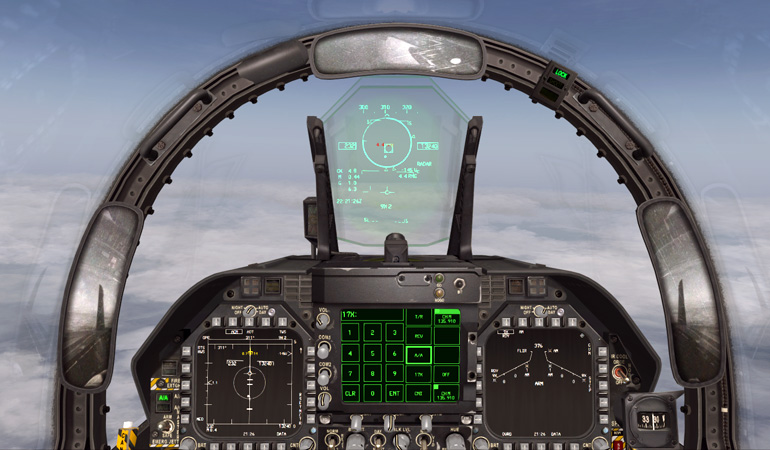 Obviously, we’re all hot-and-sweaty over TacPack’s ability to arm-up your Super Bug for battle, and by now you might have wondered just how that gets done. Well, through the magic of the “VRS TacPack Manager” of course! Here’s how to run the TacPack Manager and configure your Super Hornet.

One thing Ken discovered was that he had a heck of a time pickling bombs using the default keys/macros. Once assigned to Direct X controller buttons in the TacPack Preferences tab, dropping bombs onto unsuspecting virtual targets was much easier. To insure trigger mapping for your HOTAS is set, go over to the Preferences /Trigger Mapping page in theVRS TacPack Manager. You’ll note in the screen grabs the CM (Control Manager) Device 1 set to Joystick, while the trigger is mapped to BUTTON 1 and the Pickle button, mapped to BUTTON 2. While this configuration that worked best for Ken, your mileage may vary. Once you have things mapped to your preference, Save and Exit the TacPack Manager.

Just to keep the “tease” about weapons loadouts going on a bit longer, we’ll next configure a fuel load in the Aircraft Configuration Manager. First you’ll run the VRS Aircraft Configuration Manager. Now, fill both the internal tanks and external centerline with fuel. To do that, click on: Fill All Tanks as seen in the screen shot. Now you can go somewhere with your weapons!

Finally, the part you’ve been salivating to read – weapons loading. In the Aircraft Configuration Manager you can select a wide variety of pre-made payloads, or you can mix it up by selecting each station and load the available ordnance for that station. For the purpose of this review, I’ve selected a pre-made “STRIKE 3” payload as seen in this screen shot. When you’re all done configuring your aircraft, be sure to save the configuration for future use – it can make hopping into a practice flight much quicker. After saving your work, exit the TacPack Manager.

Now it’s time to go into the FSX GUI to see what you’ve created. There, select the VRS Superbug for your own use. Next, select an aircraft livery from the drop down of assignable aircraft: In the Publishers drop down menu click on Vertical Reality Simulations, This will provide you with all kinds of US Navy Liveries (skins/squadrons). As you’ll see, there are many liveries to choose from. Sadly, no US Marine Corps (VMFA-531 *cough*) squadrons made the list. [Editor’s Note: Ken forgets the Marine Corps did not purchase the F/A-18E because they elected to wait for the fatter and less attractive F-35B Joint Strike Fighter.] Once an aircraft livery is selected, you’ll note the ordnance you previously selected in the VRS TacPack Manager is now on your aircraft! You’ve got a fully-armed strike-fighter in a formerly all-civil aviation FSX – How cool is that?!

First to keep things simple you’re going to want to configure the Traffic Settings. Here’s an example screen shot to give you an idea for your initial forays into TacPack flying.

There are several methods in mission or scenario planning to create what will basically become your target. First, you could find the nearest AI traffic airliner and shoot that down. Unsporting and a bit creepy I know, but it does get you quickly into experimenting with the stand-out feature of this mod [Editor’s Note: this method of air-to-air practice is an option in the virtual world only. Please don’t try this with your real F/A-18E against real airliners. The FAA and FBI frown upon this type of “practice”]. Other methods would be traffic creation using third party AI creation flights, traffic plans or simply using the VRS tanker as a target. In my example I made a MiG-29 as my target using the Tanker method. I’ll go more into that later. The TacPack does come with a target drone. At this time how to add other aircraft as targets is unknown. 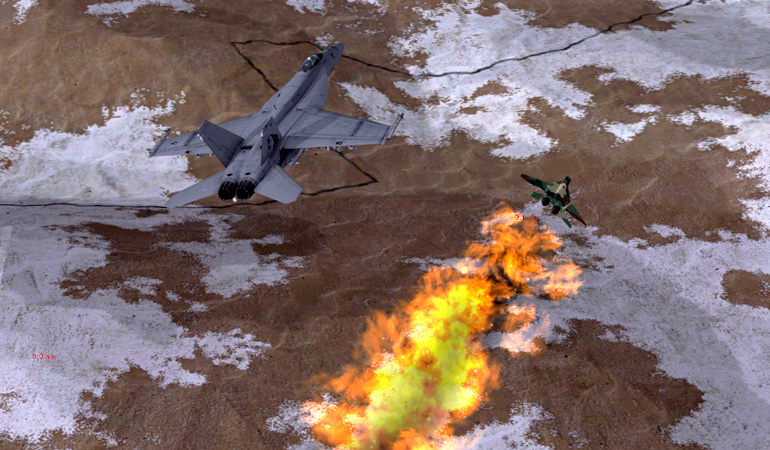 For this mission Ghost set up a Super Hornet flight out of one of his favorite Naval Air Stations, NAS Fallon, Nevada. Yes, Nevada. Let’s make it a nice day to be flying… And while we’re at it, let’s save this flight so we can re-fly it as often as our heart desires… 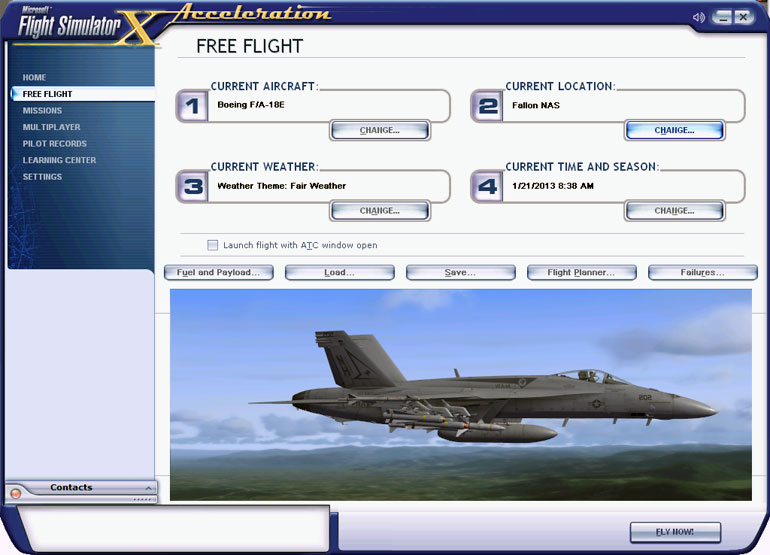 If some in-flight refueling practice is part of your mission plan, the TacPack Manager screen allows you to use theTacPack default tanker (a KC-135 with the feared and respected “Iron Maiden” basket attached to its boom), or you can add your own 3rd-party refueling tanker to the manager so that you may use it in the game.

Okay, now that we’ve done the Fallon Shuffle (you’d have to be stationed or deployed to Fallon to get that inside humor) let’s follow FSX’s invitation to “FLY NOW!”

In the TacPack Manager you can add third party aircraft carriers in the same way that you can add Tankers (discussed below). Choose the ship on the right hand side then add to carriers. You may also change the ILS and Tacan to shoot your own approaches. Using the TeamSDB Enterprise it took some tweaking before David was able to land without a hitch. 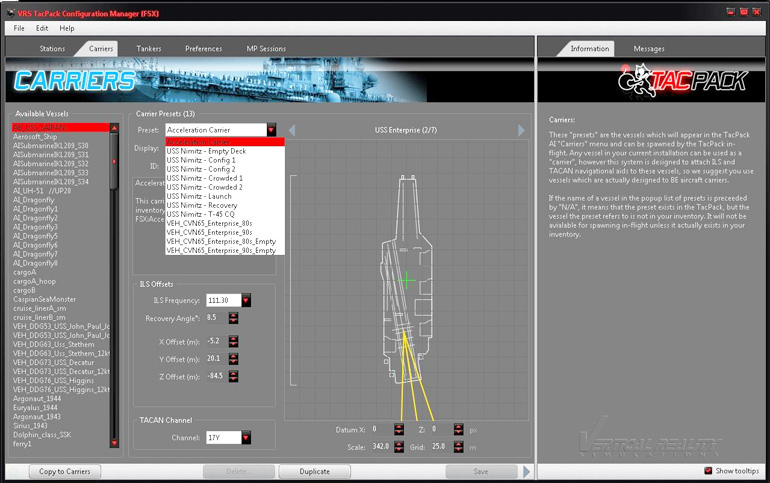 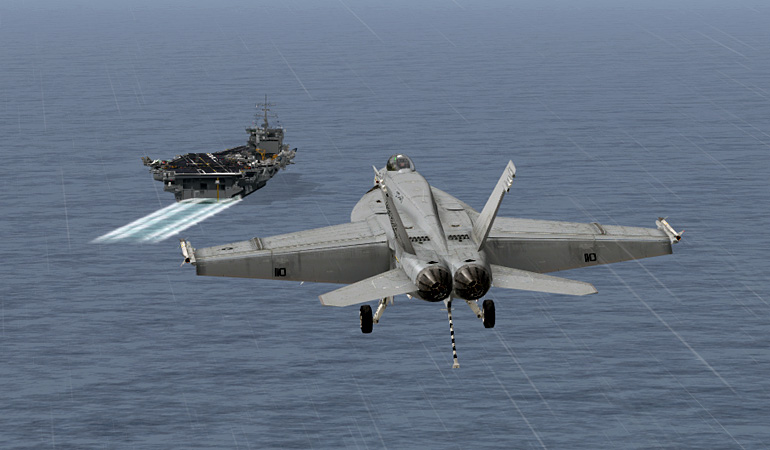 The TacPack Manager screen allows you to use the TacPack default or add your own refueling tanker to the manager so that you may use it in game. As mentioned earlier, this is where I added the MiG-29 to use as a simple target.

The red and yellow refuel zone may be tweaked using the x, y, z azimuths located and the bottom of the screen. We left these as they were unless adding a new Tanker in which case you tweak these yourself. Another method is to duplicate a Tanker then change the aircraft. In most cases this will be the easier method.

You may also change the ILS and Tacan to shoot your own approaches. Using the TeamSDB Enterprise it took some tweaking before David was able to land without a hitch. 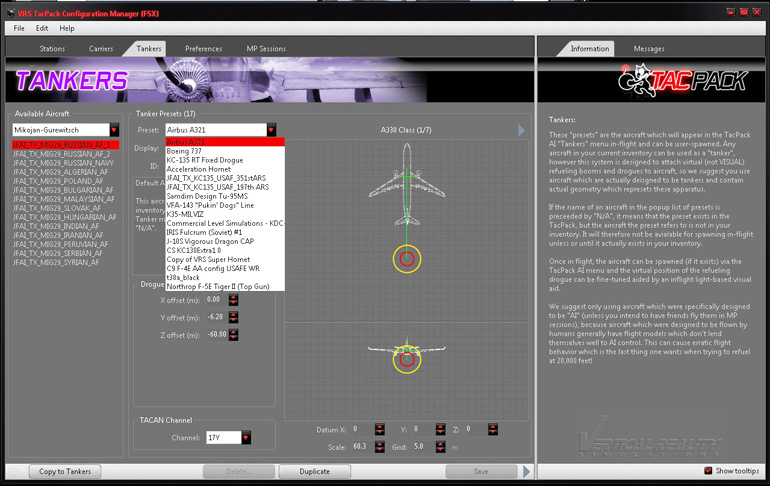 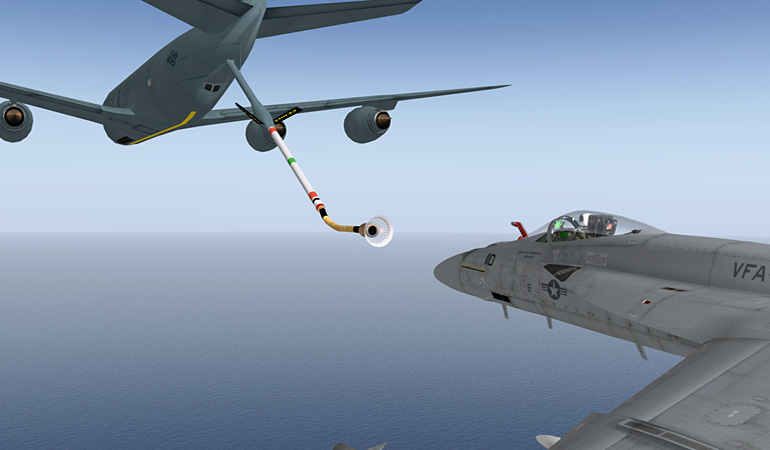