Not too many years ago, Steam’s Summer Sale event was the go-to gaming sale of the year. However, with the explosion of digital sales in the last five-ish (or so) years, plenty of other sites have cropped up to compete with Steam in seeing who can slash prices the lowest. Not that I’m complaining since each time these sales happen, I’m typically able to nab a game or two for ridiculously cheap.

So, in case you missed out on Steam’s annual sale, which wrapped up earlier this month, you may want to check out the sale going on over at Green Man Gaming. The sale will last until August 4th, but every 24-hours there will be a new set of flash deals (sound familiar?). If you use the voucher code “SUMMER2017” then you’ll get an extra 20% off.

While I’d recommend checking each day to see what’s been added and what’s currently on flash sale, here are the current Sim&Strat games on sale.

Some overall personal recommendations? Sure, why not.

Real-time strategy + 4X elements + space. Rebellion is a stand-alone expansion of the 2008 game that I spent countless hours playing when I should have been going to classes.

More 4X based that Sins of a Solar Empire, Galactic Civilizations III is another space-based empire building RTS of massive scale. If you’re more into 4X strategy than combat strategy, I’d recommend this over Sins.

I recommended This War of Mine during the Steam Summer Sale, and I’ll recommend it again because I enjoyed it that much. Instead of playing as some beefed-up super-soldier, you play as a random nobody in a war-torn city with the goal of surviving.

Did you like Portal and its sequel? If so, you may want to check out The Talos Principle. While it’s definitely not a Portal clone, it’ll scratch that same itch as you solve its first-person puzzles.

Do you like the original Fallout games (1 and 2)? Better yet, have you played the original Wasteland which inspired Interplay to create Fallout in the first place? If “yes” to either of these questions then I’d recommend you check out Wasteland 2: Director’s Cut. Released in 2014, it’s a modern take on the classic isometric RPG and a game that might make you forget to eat all day while engrossed in its world.

While some of the modules for DCS were on sale during Steam’s blowout, Eagle Dynamics is currently having their own sale which lasts until July 24th. Aside from the Normandy 1944 map and the World War II Asset Pack, everything is 50% off while the sale lasts. 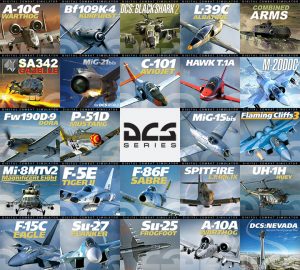 There is also a new Tactical Training Qualification Campaign available for the A-10C Warthog:

The A-10C Tactical Training Qualification campaign puts you in the cockpit of an A-10C Warthog, and tests your ability to interact with JTACs, Airborne FACs, AC-130 Gunships and manage Close Air Support (CAS) assets. Based on real world qualification requirements, you will fly 15 performance check rides to execute against pre-defined performance objectives.  If successful, you will rate a Qualified rating and proceed to the next performance objective.

Additionally, 15 single player practice missions are provided so you can perfect your tactics, techniques and procedures. There are over 1,300 voiceovers and over 470 pages of briefing material including the A-10C Amplified Checklist, Blue Force In-Flight Guide, Operation Agile Spirit SPINS, Maps, Target Diagrams, Mission Data Cards and Custom Kneeboards.