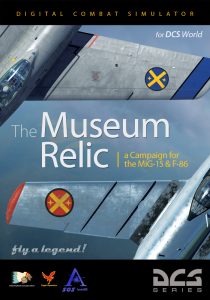 Eagle Dynamics and Belsimtek, as we discussed previously, have released the F-5E Tiger II out into the wild, and it’s been met with fairly positive reviews. Shortly after the Tiger II’s early access announcement, ED released update 2.0.3 for DCS World 2. While mostly a maintenance patch, concerned with bug fixes and tweaks, 2.0.3 also integrated some new VR features into the game, including:

“The Museum Relic” campaign has also been released and features a story driven campaign for the MiG-15bis and F-86F. The campaign is packed with 22 story driven missions that test a variety of pilot skills. As usually, you can expect a wealth of reading material (mission briefings, flight plans, etc) to accompany each of the campaigns missions. Happily, ED has also included a great deal of voice over work for the campaign – specifically, the missions offer 17 different voice actors preforming over 400 different voice overs.

You can grab The Museum Relic campaign for $9.99 USD, but you’ll also need the MiG-15bis or F-86F to access the content.

Developer 1C released Battle of Moscow, as well as the P-40E-1 and MC.202, on Steam this month, as an expansion DLC for Battle of Stalingrad. On top of this, 1C has changed the way they’re handling their games’ availability and basic website functionality.

Update 2.003 has also been launched and includes several changes and fixes. Some of the more exciting new features, include:

The team over at 1C is also now moving forward with future plans, beyond Battle of Moscow. What, exactly, those plans entail is unknown for now, but you can bet we’ll find out soon enough.