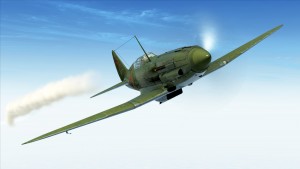 Developer 1C has released update 1.106, which includes numerous additions and fixes, in time for the Holidays. After the long wait for 1.104, it’s nice to see 1C hard at work pumping out more updates to close the year.

The biggest addition to the game in this update, comes in the form of the MiG-3 Soviet fighter which will be joining the ranks for all players. However, if you haven’t already pre-purchased Battle of Moscow then you won’t be able to actually fly it yourself. You will be able to see the MiG-3 under AI control in QMB and the early Stalingrad campaign, as is historically accurate. Check out our preview of the MiG-3, right here.

Oh, propeller wash affecting grass is finally a reality! It’s a little touch, but it’s one that fans have wanted for a longtime. 1C also promises that in the future, the grass physics will evolve to bend beneath the fuselage and wings, as well. While the previous changes are some of the more notable ones in 1.106, they’re definitely not all of them:

Changes in flight modeling and AI: