Visually speaking, Railworks 2 succeeds at building a convincing and lifelike world. While the graphics could be argued to be off the cutting edge, they are certainly very detailed.

The trains are for the most part beautifully rendered, and feature nice reflective effects on the exteriors, animated drivers (when viewed from the exterior), and people in the passenger cars. The locomotive 3D cab interiors are self shadowing, with smoothly animated gauges and controls, and some nice textures all around that create a solid impression.

The world outside is, in my opinion, excellently detailed; much more so than I had anticipated. There are animated features scattered through each route, from automobiles on the roadways, to railroad crossing gates, to construction equipment, to wildlife. There are animated passengers at the railway stations who stand and wait, and walk along the platform to their destinations. Animated, reflective water flows through the rivers and streams, and realistic shadows fall from much of the scenery.

The depth of the scenery, meaning how far it stretches toward the horizon and how good it looks doing it, is pretty well done, as are the different types and sizes of towns dotting the rail routes. Moving your view farther away from the typical camera perspectives near the train will show decreasing detail in the world, as you’d expect. But the impression of the scenery from the trackside, external, and particularly the locomotive cab and passenger points of view is quite convincing for me. 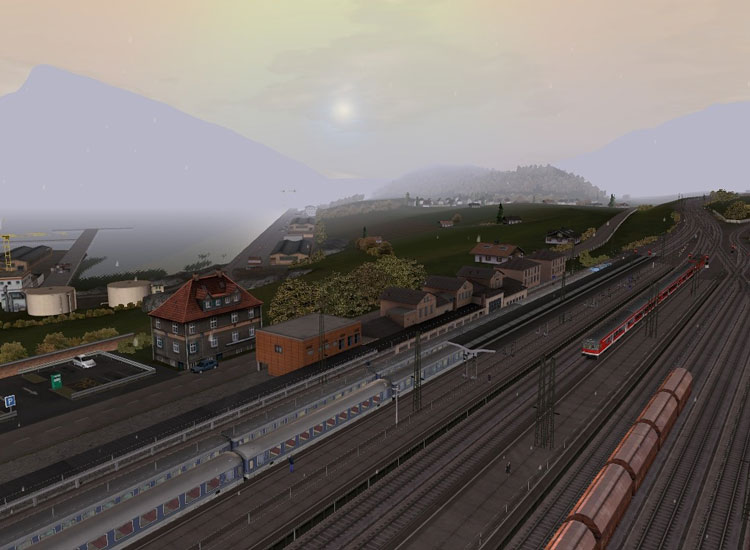 A broader view of some railyard activity.

Some of the railways have different seasons modeled, as well as different times of day. I found these well done. A dark winter scenario dotted with a few lights from buildings and moving automobiles struck me as particularly “atmospheric”.

There are a few visual shortcomings to be found. Sometimes there is grass growing in the middle of a highway or railtrack. On occasion I spotted some of the animated people walking through buildings or out past the edge of the platform at a station. During rainy weather, I saw no animated effects of the rain on the locomotive windows, though the wipers in the locomotive cabs do animate in any case. While I did notice these issues, I didn’t find them serious or distracting from my gameplay.

Graphics performance on my budget gaming PC was a nice surprise. Running with all the Railworks 2 graphics options on highest levels, at 1024×768 (using 4x antialiasing, 16x anisotropic filtering) was smooth for the most part, with only occasional moments of slowdown. All the screenshots I captured for this review use these settings, you can judge the image quality for yourself.

A very minimalist approach has been taken with the sound presentation for Railworks 2. Among the first things you’ll notice, is that there is no music. The only sounds outside actual gameplay are subtle recordings of trains rolling past during the loading screens.

Once you are loaded, you are treated to only the sound of your in-game environment. These sounds are quite well done. The locomotive engines have unique sounds, from throaty rumbles for the diesel engines to the myriad clatter of the steam engines, and the sounds of brake pressure system pressure changes. I have never been aboard a real life locomotive, so I cannot tell you whether these sounds are accurate. Nevertheless I found them satisfying. I often experienced an almost irresistible grin when blowing the horn of the EMD SD-40-2.

From the exterior views, sounds are also nice, though I felt that the rumble of the train approaching the camera seemed not to carry as far as I would expect from real life experience.

I’ll only briefly comment on the Railworks 2 Editor, due to my lack of experience in meaningfully using the tools. The included editor tools allow editing and even creation of entirely new rail routes, as well as the scenarios for play. I experimented with several of these to get a feel for the UI and what was possible when using these tools.

Railworks 2 editor uses a 3D interface, with toolbox menus that hide along the edges of the screen. Moving around in the editor interface uses the same commands as the detached camera while driving a train. While exploring a rail route to edit, any of the 3D objects can be selected, which brings up a widget that can be used to manipulate the object in the 3D world. New objects can be placed from the toolboxes, things like track, buildings, foliage, roads, and signs. I was able to add and move most of what I attempted to my liking, though it was clear that there was much more under the hood that would require deeper study to understand. 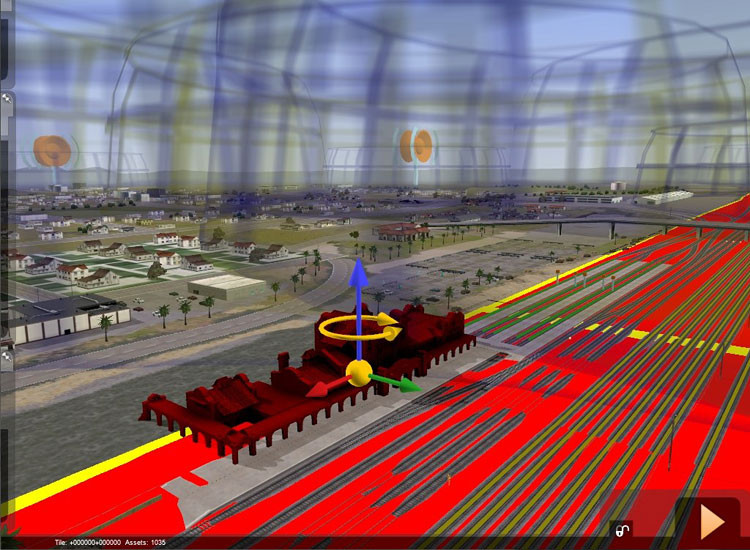 The “World Editor” is shown here, with a 3D “widget” for manipulating the selected object.

The editor also allows use of “brushes” to modify the landscape and it’s texture. I was able to “paint” some hills on a flat landscape, “paint” a rocky texture on them, then create a low spot in the middle of them. I then created an animated, reflective water surface which filled the low spot to form a lake. This was all done using a 3D interface, and pretty straight forward point and click work. Given enough understanding of the provided tools, it would seem possible to continue in this manner, crafting an entire world and rail route as desired from scratch.

The scenario editor allows construction of the same types of scenarios that are included with Railworks 2. Presented with the same 3D user interface, I was able to place some trains and cars on the tracks near the station I had selected for a very simple “Free Roam” scenario. Save, then load the scenario and begin driving the train. There are tools for creating tasks and placing AI controlled trains, as well.