What we are looking forward to at E3 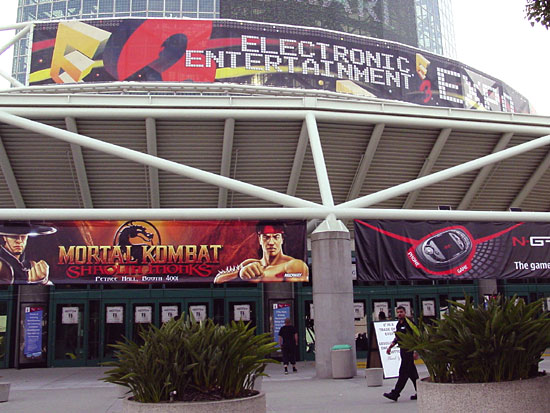 Well, the first (sorta) day was pretty mild. After an uneventful flight in I essentially took a nap, got my credentials and then played shuttle getting guod and Chunx back to the airport and to E3. We got some shots of E3 (special thanks to Rod ‘Snapdad’ Karp for letting me borrow his camera) outside. We press types weren’t allowed access to the inner part yet, it isn’t finished, but the three of us ambled into some conference room and convinced a group having a meeting to let us take some shots through the window. 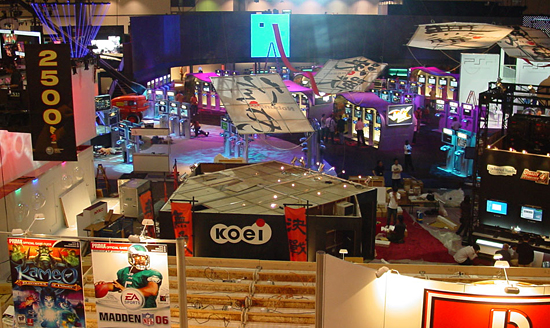 I am looking forward to seeing the display and discussing Akella’s upcoming PT Boats: Knights of the Sea. After seeing some of the screenies and the latest video I am really becoming excited about this. I am dreaming of playing John Wayne in ‘They Were Expendable’. I think this game may be the sleeper hit of the event. 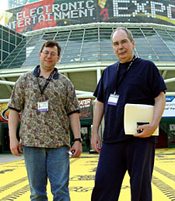 I am also interested in seeing how GMX Media’s Battle of Britain II is shaping up. This reintroduction of the Empire Interactive’s venerable title has the potential to correct the few problems with the original game while at the same time bringing the game graphically up to the level of most modern simulations. This looks to me to probably be the flight simulation leader at E3.

Surprisingly (at least for me) I am really interested in getting to know more about the Xbox 360 and the Playstation 3. Yeah, I know, they are consoles and consoles are BAD but this may actually be the first time that I consider the console platform capable of the intricate commands and storage requirements currently furnished by PCs. I won’t be throwing away my PIV anytime soon but if I will soon have the capability to plug a HOTAS setup into a PS3 then I might take notice.

This will be my first E3 so I plan on playing the starry eyed kid. I have already been told that I won’t see half of what I want here. I hope they are right, my fear is that “consolitis” has attacked the folks here and that us old PC guys may be a dying breed. We shall see what is coming up, maybe a surprise or two may be coming our way.

Flying United airlines into LAX this afternoon, I couldn’t help but feel a sense of anticipation about what lay ahead for me this week. Even though I’m no stranger to E3 conventions (this is my third), I am very excited to be experiencing the sights and sounds of this year’s expo with some of the most capable members of the SimHQ staff. After 2 years of online discussions, collaboration and racing, I was finally about to meet guod for the first time. If that weren’t enough, having the chance to tour the show and hang out with the likes of WKLINK, 20mm and Scott Gentile would also make this rather expensive hobby trip worthwhile. 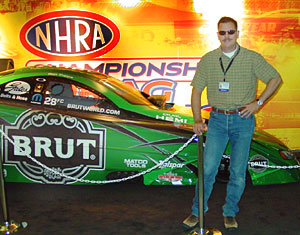 Having been to several E3s in the past, I have long since learned that the Expo is so huge that no matter how hard you might try, you simply can’t take it all in. So, cruising along at Flight Level 350, I thought about what I was really looking forward to seeing at the show. Being a motorsports fan, of course I’m looking forward to seeing things like GT Legends and the US release of GTR. There’ll also be a new NHRA Drag Racing sim for PS2 that I plan to check out, as well as a few other titles in the motorsports genre. We’ve heard that Adrenaline Corp is hosting a “pole position” competition at their booth in Kentia hall using GTR as their sim vehicle, and I plan on learning more about their Pilot Series PC while trying my hand at that (relatively) new sim. Of course EA will be at the show, and hopefully someone there will be available to discuss the patch plan for NASCAR SimRacing. And, if there are any other venues touting new racing titles, especially those from FIRST Racing, I’ll be trying to sniff those out as well.

Luckily, new titles or no, I already have plenty of entertainment depth on my PC at home, with the enduring playability of my favorite racing sims (F1C, GPL and NR2003). All that they require to be enjoyed is a solid, fast computer, and high quality controllers to interface with them. So, I’ll be spending a good portion of at least one day scoping out the latest in racing wheels and other sim controllers at manufacturer booths like Saitek, CH Products, and Natural Point. 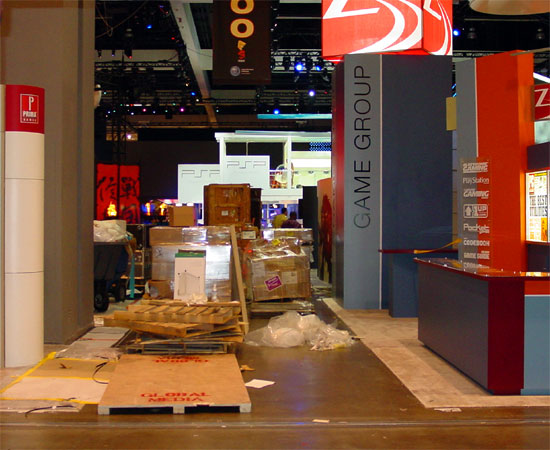 Although I’m primarily interested in covering motorsports titles and peripherals, I still have a fair bit of interest in other aspects of this hobby, including tactical and flight simulations. There are a few flight sim titles to look at this year, such as BoB II, the upcoming products from Ubisoft/1C, and several others that are currently below most folks’ radar screens. One such game is a light sim from Australia called “Heroes of the Pacific” which most likely won’t scratch our hard-core sim “itch” but could prove to be a fun title. 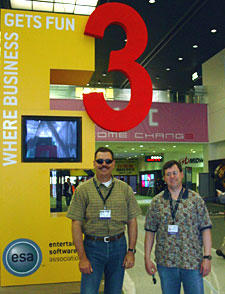 When I need a break from working on my lap times in one of my favorite racing sims, I often turn to a good, hard-core tactical simulation, and there should be a great deal of those to check out this year’s show. Follow on titles for OFP, Ghost Recon and Rainbow Six should all be up and running here. And, America’s Army will be offering several hand’s on, interactive sessions at their booth as well, including a Shoothouse Simulation using real-world training gear from Lasershot Shooting Simulations, Inc. And I’ll get the chance to try my skills in America’s Army: Rise of a Soldier against the “Frag Girls,” an all-female videogame team.

All in all I think the lineup of PC sim titles and related hardware will be more than enough to fill our schedule each day of the event. But as Doug, Tom and I inched along the LA freeway system from the E3 media registration center to dinner at a high-quality LA restaurant recommended by our hotel concierge, we discussed the possibilities and prospects for hard-core sim fans offered by the next step in the evolution of electronic entertainment components – X-Box 360, Nintendo Revolution and Playstation 3. Luckily there’ll be plenty of X-Box 360 info to be had at the Microsoft booth and elsewhere, and we’ll be interested in hearing how the next generation of console systems might attempt to bridge the gap between mindless, quick entertainment and replayable, challenging content. Hopefully there’ll be some good news there, not just in terms of design and engineering but also in marketing and product development. We’ll see in the days to come.