Once the software matures beyond basic functionality (which, granted, is pretty powerful — full programming of every switch, dial, axis, and slider multiplied by three modes) the potential is huge for the unit. First, the iMFD display comes with an SDK for programming display information. If one is so skilled and with the right knowledge, the opportunities for some really cool stuff is endless. Provided there’s an appropriate hook in the software, the X52 PRO could be programmed to change the color of a button depending on which munition is selected in a jet fighter, for example. Or the buttons could all flash red if there was a radar lock on the aircraft. Or in a stall. Imagine having the lights on the setup slowly dim to nothing if one’s engine is knocked out, while the iMFD shows the oil and coolant pressure drop and the RPM’s slow to a windmill. Saitek does provide an “output test” proggie to let one peek at the potential. Naturally, one has to find out about it by surfing their website, as there’s no documentation provided.

Here’s a picture of my setup in “Christmas Tree Mode” with custom text on the iMFD: 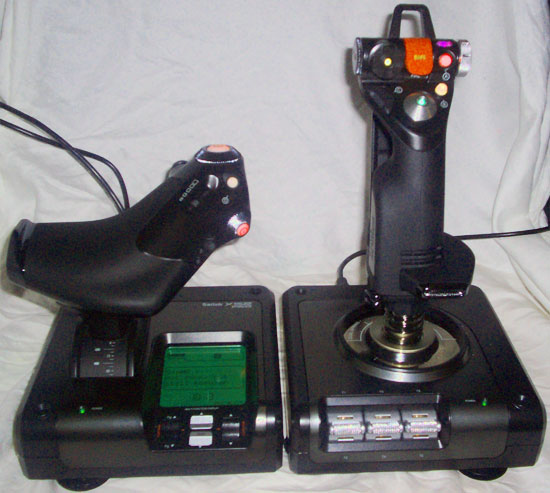 You’ll have to forgive my crappy photography, but the buttons are red, yellow, and green. No blue. And the iMFD stays green.

Sadly, once one exits the sample program, it all goes back to green. Indeed, there is no way other than programming in C++ to change the color of the LED’s at this time — something the guys at Saitek say will be changed in the next release of the programming software for the X52 PRO, allowing users to change the colors globally (and, hopefully, within profiles and modes).

I’m calling it a “build forward” feature, one not yet realized for the customer but there for expansion later (much like the “Perfect” terrain in the IL-2 series was placed in the simulation well before we had hardware to truly take advantage of it).

Indeed, FSX already has a plug in for it, allowing one to “stack” the iMFD with radio information and quickly scroll through them. Saitek includes the demo version of FSX with the X52 PRO to show it off. I actually installed and tried it out. Turns out the rumors are true: there are no guns on the planes provided for strafing the beach one flys over in that sim. What’s the point, again? Uninstalled.

If developers, ubersmart users, and the software guys at Saitek really go after this, it could be big and really increase the utility of the PRO and increase immersion in whatever game or simulation one is flying. We could have information on demand in the iMFD rather than on the screen — target info, briefings, full plane status, etc.

Perhaps in the PRO II it will be an LCD screen that is multi-colored and wide open for use to replace what they have now. With a clean slate like that, we could have maps and fully customizable displays. And yes, Saitek, I am willing to beta test such a device.

Final Conclusion on the X52 PRO

If you’re in the market for a HOTAS because you don’t have one, yours is broken, wearing out, or you really, really want a new one because, well, you deserve it, this is the one you want.

The Trifecta of Flight Sim Peripherals: Page 5
How to Participate in Flight Model / Damage Model Debates