Setting up the MFP this way proved to be a lesson in space management. I had to work pretty hard to use all 50 buttons and still get everything to fit, but the end result is nice to use. I’ve decided to fly with the keyboard off to the side and the MFP front and center. The MFP angles from the edge of my desk down to my keyboard tray, and is prevented from slipping off by using a large office clip. 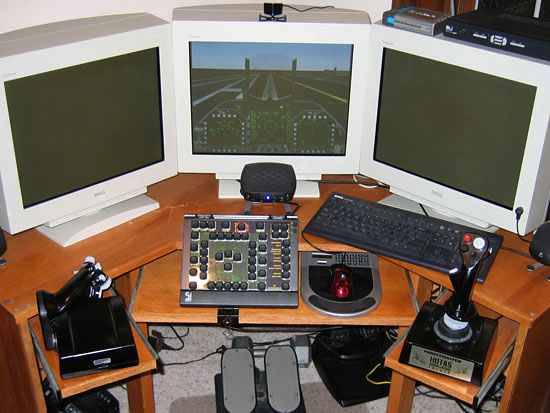 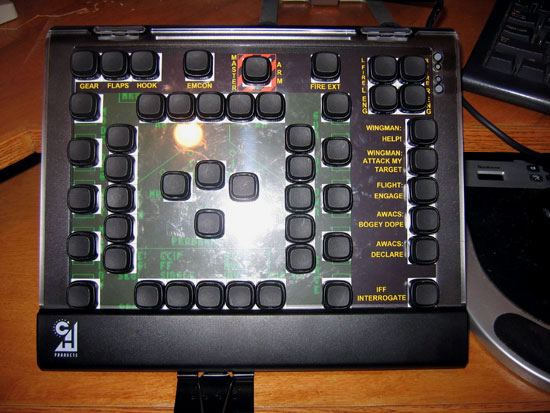 There are a few other useful ways the MFP could be utilized in this situation. For example, the MFP could be arranged with two sets of 20 pushbuttons (although space on the MFP would be very tight). Using the green and red modes, 40 MFP buttons could be used to control 80 in-game pushbuttons, leaving 10 more buttons for UFC hotzones and/or other functions. If you have only 25 keys it is likely that you’ll run out of buttons before you run out of things to do with them.

If you’re using your MFP with Falcon 4: Allied Force, there’s no option to use a single set of pushbuttons for both MFDs. That means that 40 buttons are required to simulate both MFDs, not counting the display gain controls. There are also 24 active positions on the F-16’s ICP, not including the rotaries, meaning that a total of 64 MFP buttons would be needed to simulate the F-16’s three main interfaces. Since the MFP only supports 50 keys, that means that each MFD would have to be programmed in a different mode (green or red) or more than one MFP would be needed. Simulating the F-16 also means that some odd-shaped controls have to be dealt with, such as the 4-way DCS switch on the ICP. CH has hinted on their forums that they’re considering these sorts of unique physical interfaces for use with an MFP, but for now only momentary pushbuttons are available.

After evaluating the MFP as a single auxiliary controller, I then reconnected my homebuilt MFD system and used it alongside the MFP. Using other controllers as MFDs allows all 50 MFP keys for other functions. I chose to reconstruct certain important pieces of the Superhornet cockpit, including the weapons jettison controls, master arm and master mode controls, fire extinguisher systems, etc. Once again, this required more than 25 buttons, although less important commands could be dropped if necessary. However, it proved impossible to fit all 50 buttons on this layout because of the space required for button labeling.

If you happen to use other controllers for MFDs in F4:AF, then the commands you could assign to the MFP are almost endless, considering F4’s fully mapped cockpit controls. In fact, there are so many commands in either sim that you could program an entire 50-button MFP using only comms commands… 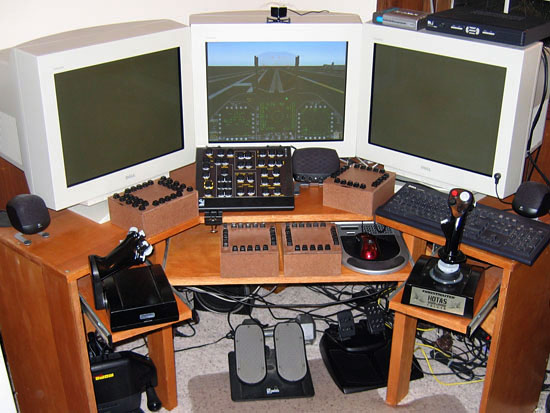 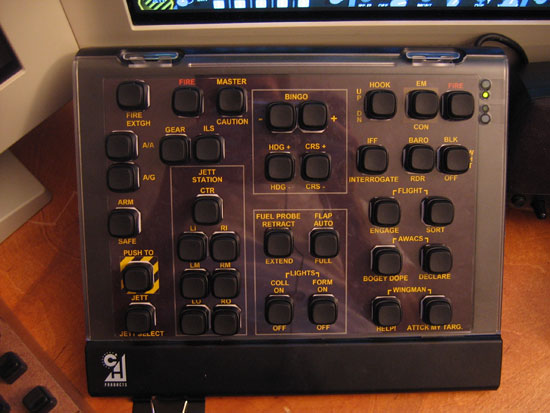 In this configuration, desk real estate is at a premium. I had already designed an MFD control system so that it fit snugly on my desk, and adding an additional controller the size of the MFP proved challenging. If you have other computer peripherals in the way, or you don’t have a lot of free space, be cautious about purchasing an MFP — it’s definitely a large controller. Space concerns aside, though, using a CH MFP in this way is a very immersive and enjoyable simming experience.