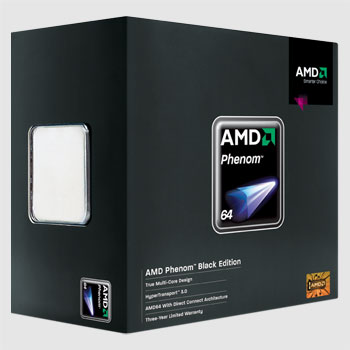 The QX9650 clocked at the expected 2.66GHz rate of the forthcoming Q9450 consistently outperformed AMD’s flagship X4 9850 across all test settings; that said, the Q9450 is also slated to cost $100 more than the X4 9850, and with that in mind the new Phenom is definitely a solid performer. Those aware of the Phenom architecture’s performance shortcomings compared to Intel’s desktop parts will hardly be surprised by the test results produced for this article, despite the 200MHz jump in the X4 9850’s clock speed over previous Phenoms — which in turn sees a significantly higher TDP rating over the 9600; this rather strongly suggests that there may be little room for future clock speed increases until AMD can achieve a sort of fabrication parity with Intel by moving to their own 45nm process. AMD currently suggests that 45nm Phenoms should start arriving in the 2nd half of this year, so until then there is little if any chance of AMD overtaking Intel’s performance lead.

Where AMD can compete against Intel, however, is with price and availability, and in these two areas the company does seem to be faring better. While consistently lagging behind the Q9450 in all our testing, the X4 9850 also carries a MSRP of basically $100 less than the Intel processor (notwithstanding any sudden, last minute changes on Intel’s part), which, as part of the Penryn family, still has only the QX9650 available from any e-vendors a full five months after Intel’s Yorkfield launch last year. Beyond CPU pricing, 790FX boards are also selling for $40-50 less than competing, high-end Intel motherboards.

While AMD’s Phenom line may be in something of a holding pattern for now, waiting for a 45nm die shrink later this year for any hope of scaling to competitive clock speeds against Intel’s Penryn processors, the beleaguered company does appear to be moving forward and can hopefully sail past the turbulent waters it currently finds itself in. Tri-core Phenom processors are due for market arrival fairly soon and work on Fusion, an integrated CPU/GPU hybrid, is still slated for a rumored 2009 release. In the meantime, however, Intel is also hard at work on their next-generation Nehalem design due late this year or early next, so time is definitely not on AMD’s side. 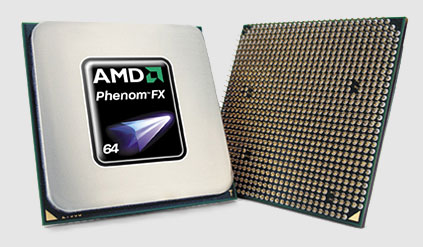