As we get closer to LOMAC’s arrival, SimHQ (and our readers) asked some questions of Ubi Soft Entertainment and LOMAC’s Producer Matt Wagner. 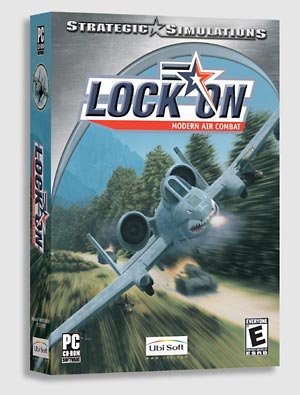 Questions from the SimHQ Staff

A: Yes, Windows 98SE along with Windows ME are fine but we cannot promise support for Windows 95 (or below). We recommend Windows 2000 or Windows XP.

Q: Does it require DirectX 9?

Q: Does it use DX9 features like Pixel / Vertex Shaders 2.0 or is it the DX8 versions?

A: The graphics engine is based on DX8 technology.

Q: Does it run on more than one CPU thread?

A: No, Lock On can run all computations on a single thread.

Q: Are you testing it with the Matrox Parhelia for Surround Gaming?

A: Yes, Surround Gaming has been implemented and is currently undergoing testing.

Q: What are the multiplay options? Head-to-Head? Campaign Co-op? Force-on-Force?

A: The mission editor can be used to create all sorts of multiplay scenarios like Head-to-Head, Cooperative, and creating Side Battles.

Q: Will the campaign be “multiplayerable”?

A: Not for at least the initial release of Lock On.

Q: How open will the architecture be?

Q: (Steve Martin)  Will multiplayer be a peer-to-peer model or a client server model?

A: Peer-to-peer and over Ubi.com

Q: (LoneHawk)  As an avid fan of the good old USNF / ATF / Fighters Anthology series, I’d love to see the naval air warfare aspect of LOMAC expanded upon in potential future updates. Do you have any plans to expand LOMAC in this direction? Kuznetsov was an original, unusual and highly commendable choice of platform for the carrier air warfare part of the game & it would be good to see player usable versions of other carriers in the conflict.

A: Right now the team is focused on completing Lock On and no plans have been finalized for what happens next. While we have many ideas, and a great deal of input from the online community, it is simply too early to discuss such plans.

Q: (Stephen Romano)  The lethality of incoming missiles in Flanker 2.5 and my inability to dodge them put me off to nearly all of the single missions and the whole campaign. While I still love to fly in free flight because of the wonderful flight model, I feel like I am missing out on much of the game.

A: Then you will appreciate the missile lethality slider in the Difficulty Options screen. By using this slider, you can adjust the parameters that affect how deadly missiles are against you. Such parameters include maximum G, motor burn time, effectiveness of counter measures, and seeker field of view. In addition to the slider, real world tactics like terrain masking, Doppler clutter notch, chaff/flares, and ECM are all realistically modeled.

Q: (Stephen Romano)  Will the SA and lethality of LOMAC be such that an average simmer like myself can, with practice, achieve mission goals and jink missiles… at least some of the time?

A: You bet. The combination of the above and the missile padlock and labels can make dodging missiles much easier, and more realistic, than it was in Flanker 2.5

Q: (DSL)  Will LOMAC support joystick configuration so player can select separate axis and what that axis will be used for? (Similar to IL-2 Sturmovik, select what function, move axis and its saved)

A: Yes. The input manager will allow you to bind your own axes and save them. You can also set response curves and dead-zones for each axes within the game.

Q: (ALDEGA)  Will there be a way to add your own “skins” for aircraft? This would be an easy-to-implement way for editing.

A: That is planned for Lock On, but we cannot promise it at this time.

Q: (BBQ)  A good tool in determining the level of realism in a simulator is to attempt a completely “heads down” (instruments only) flight — back to the home airbase, using TACAN (for the US side anyway), and other instruments. Will this be possible in the F-15 and/or the A-10?

A: Just using the onboard navigation systems (both Russian and U.S.), it is perfectly possible to shoot a completely heads-down landing. Given that there are no TACAN stations in the Crimea and Caucuses, it would not be realistic to have such stations in the game.

A: Eagle Dynamics has implemented native support for TrackIR.

Q: (Mike Pohl)  Will LOMAC have the ability to do two outputs (i.e. one output of the instrument panel and the other of the “out the window view”)? Assumption here is that we have two video cards in our PC.

A: There are no such plans at this time.

Q: (Shadow)  I am a long time combat sim fan. I am also a professional pilot. I have long wished for realistic weather conditions in combat sims, including precipitation and visibility restricted to the point that a precision approach would be required at the end of the mission. A recent screenshot released on your web site shows a weather interface page that includes General Visibility and Fog with associated sliders. Just how low will we be able to adjust weather conditions in LOMAC?

A: Given the fog effects, weather conditions can be adjusted as low as zero feet.

Q: (Paul Williams) While often very realistic, very few LOMAC screenshots show any clouds at all; by contrast CFS3 visuals probably highlight the clouds more than any other element. Will there be 3D cumulus? What will it look like? Can we see some screenshots?

A: Please review the more recent screen shots and videos on www.lo-mac.com. Lock On includes both 3D cumulus clouds and solid cloud layers.