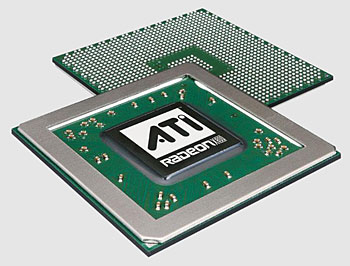 One new feature found in the X800 parts that ATi has been heavily touting is 3Dc, a compression tool for normal maps. As game developers strive to create more detailed and realistic looking environments, one of the key means of doing so has traditionally been through higher levels of geometry for game models and environments . However, even greater levels of geometry with multiple texture layers applied can still appear as rather flat and unrealistic looking, and the level of geometry required to avoid this appearance would be beyond the means of graphics boards engineered for the consumer market, which have traditionally been designed with more of an emphasis on pixel rather than geometry rendering (in contrast to professional graphics workstations). Because of this situation, developers have begun relying on a technique known as normal mapping, which is a special texture map that stores information dealing with how in-game light interacts with the rendered surface. This creates an illusion of greater detail than what’s actually present while taking advantage of consumer graphics boards’ emphasis on pixel processing.

However, for a normal map to create a model or object that is substantially more realistic looking than traditional rendering techniques, the level of geometry and texture detail required to generate the normal map increases the memory space requirements to load the map into a graphics board’s frame buffer, which is obviously finite in space and required for other uses. 3Dc, a 4:1 compression algorithm for normal maps that’s based on DX5’s texture compression mode (DXTC), is what ATi hopes will enable developers to make greater use of normal mapping by allowing them to create either more detailed normal maps or to use the feature to save memory space and bandwidth by applying it to non-compressed normal maps. In fact, according to ATi numerous game developers have indicated that they plan to include 3Dc support in future games.

The benchmark suite that will be used to evaluate this test system is listed here. Again, unless specified otherwise all games are configured to their highest settings, and 32-bit color and trilinear texture filtering are the default baseline during testing. Also, Windows XP is configured to have Automatic Update, System Restore, and all unnecessary startup services disabled. Fraps 2.3.2 is used to record performance scores unless otherwise noted. 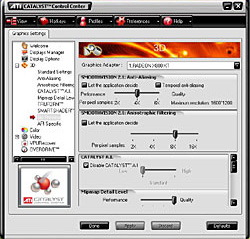 In addition, along with the latest Catalyst driver release from ATi the Catalyst Control Center (CCC), the new .NET Framework-based replacement for the traditional control panel, was also installed and used to disable ATi’s new A.I. optimizations throughout testing. The X800 series of graphics chips use a more aggressive filtering method than their predecessors, and the Catalyst driver suite now includes title-specific optimizations and shader replacements, all of which are of course intended to accelerate performance in targeted games. In all fairness, however, some of the application detections are designed to avoid known bugs or issues, such as disabling anti-aliasing for the Splinter Cell titles since the feature is incompatible with these games. Either way, ATi allows the end user to toggle A.I. settings via the CCC and care was taken to ensure that A.I. was disabled throughout testing.

The X800 XT reviewed today is a native PCI Express board that can take advantage of the full up- and downstream bandwidth of the new bus. It draws power from the test system’s PSU via a 6-pin connector on the back of the board.