Now, energy tactics become more appropriate. Updating on the new aircraft handling and energy management requirements for SP4, based on this diagram, suggests that due to the F-16’s higher energy bleed rate and lower sustained speed, he should choose the one circle fight and early high aspect shots, scissors type maneuvers, followed by extensions if guns only, due to the higher top speed… then rinse and repeat. Let’s take a look at that in diagram form. Below you see the sustained turning performance of both aircraft shown in a way that illustrates their relative turn radius and turn rate, it shows the relative position of both aircraft during a turn lasting six seconds.

You can see that while the turn radius of both aircraft is very similar, the MiG-29 has gained a significant angular advantage. In order to counter that, I mentioned previously that the F-16 driver should choose the one circle fight and early high aspect shots, and scissors type maneuvers, the diagram below shows how that should work. 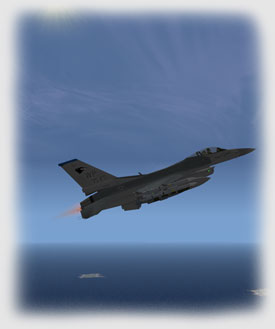 Here you see that even though the MiG-29’s sustained turn rate is superior, the F-16 gets the first shot in this situation. If you miss the shot, reverse again into a scissors, and try again, or if the situation (other enemy fighters approaching or low ammunition or fuel) dictates, take the shot and use the time required for the MiG to reverse, to execute a zero G extension, but only providing the MiG doesn’t have a missile still on the rails.

The real difficulty for the humble flight sim pilot is that the appropriate tactics have changed along with the flight model, so the big question is, now that we have the new High fidelity flight models how have they influenced the air combat? In the second part, we will look at the performance of the F-16 and consider the Dissimilar Air Combat implications for the F-16 versus MiG-29, F-16 versus Su-27 engagements. Lastly, as pointed out earlier, there is a small group of highly skilled and enthusiastic volunteers working constantly on the flight models and much of their work has been directed towards accurate modeling of the different F-16 blocks and variants including the different engine and airframe combinations, so in part two we can also take a look at the outcome of their efforts, as they strive to ensure that Falcon4 remains the most accurate simulation of modern air combat currently available.