For those that have mastered all things Earthly, you can change environments to experience flying in the Martian atmosphere of Mars. The differing pressure, density, temperature and gravity of Mars combine to give a truly bizarre flight experience.

Another nice feature is that X-Plane keeps track of your flight times automatically in a Pilot Logbook. The date, type, airports, landings, times, instrument time, night and cross-country are all automatically computed and totaled. 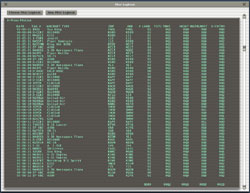 In summary, X-Plane is an incredible product. Austin Meyer has given (well, sold actually) the community the base program with a level of fidelity and fluidity that even Microsoft hasn’t managed to approach. The tactile feel of flight is duplicated very accurately with X-Plane; it is definitely a stick and rudder pilot’s flight simulator. It isn’t all roses though.

My first and biggest complaint with X-Plane is the screen and text resolution. I’m not an X-Plane guru, so I beg forgiveness if I’ve overlooked something, but it is my understanding that the native X-Plane resolution is 1024 x 768. Coupled with 4x anti-aliasing, I can live with that low resolution. You can set whatever screen resolution you want (up to a point) and seeing the terrain and 3D models at 1600 x 1200 is pretty sharp. As you increase the resolution however, X-Plane has to adjust from its native resolution to the higher resolution by auto-scaling, which can add some blurriness and make text and characters difficult to read. Even set at the native resolution however, X-Plane retains a bit of a fuzzy, washed out look despite my experimentations with different rendering resolutions and options. Reading the HUD text, instruments or cockpit labels, can be somewhat fatiguing over a long period of time. I don’t know if the fact that X-Plane is programmed on a Mac has anything to do with this, or if it is simply an artifact of the simulation rendering engine, but the fuzziness is definitely there.

I like the X-Plane 8 scenery. The terrain features, lakes, rivers, roads and forests all look good to me. The balloons, however, have to go. Everywhere you turn there is a hot air balloon.

The Air Traffic Control is very basic. I attempted to get vectors to an ILS and it wasn’t working out very well. The ATC voice is also terrible; it appears to be the same computer generated voice that my Commodore 64 used to speak back in the ’80s.

The update releases are a bit of a mixed blessing. While new features are being added, and old bugs are being squashed, there is a bit of community angst over the fact that aircraft developed for one version sometimes aren’t compatible with new versions. Such is the price of progress, but I wonder if it has kept some aircraft developers from jumping in with both feet.

To be clear though, the negatives are far outweighed by the positives of X-Plane. The realistic sensation of flight coupled with great flight environments, terrain, lighting and weather make X-Plane a true force in the flight simulation market. We’ve already seen some high quality free add-ons and I’ll be very interested to take some of the payware add-ons for a test flight in the near future.

The X-Plane program seems ripe to me for further development. Over the many years I’ve flown just about every civil and combat flight simulation product out there but none have captured the essence of the actual act of flying as well as X-Plane has. If developers coupled the flight handing fidelity of this product with something like a combat helicopter or VTOL fighter (can you say Harrier?) they would hit one out of the ballpark. To me, the combat portion of sims such as LOMAC or Falcon 4 only represent a small facet of what the entire product should be about. Making the flying exciting and challenging can only add to the immersive quality of a combat simulation.

I’d encourage everyone to download the X-Plane 8.11 demo (soon to be 8.15) and try it out for yourself. Experience the thrill of flying the V-22 Osprey or just set up some nasty weather and attempt some tough crosswind landings. X-Plane is all about the flying, and it does it very well.