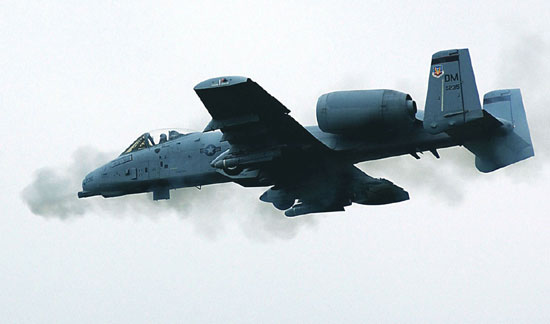 What is the first thing you think of when you see the word “Hawgsmoke”?

If it’s about an event that celebrates the finest Close Air Support aircraft in the world, along with the pilots, maintainers, and all the folks that make up the fantastic A-10 Warthog community, along with a spirited “weapons on target” competition, you’re right on the money. If you thought of anything else, well, let me educate you a little bit.

Hawgsmoke is a biennial worldwide A-10 bombing, missile, and tactical gunnery competition which follows the heritage of the now discontinued “Gunsmoke” event. Gunsmoke was the USAF’s air-to-ground gunnery and bombing competition with multiple airframes held at Nellis AFB. The last Gunsmoke event was held in 1995.

The inaugural Hawgsmoke was in 2000 at the Alpena Combat Readiness Training Center in Michigan. It was hosted by the Michigan ANG 172nd FS from Battle Creek. Col. Cliff Latta of the 172nd is credited with initiating Hawgsmoke.

Four-ship teams of airplanes and pilots from A-10 units around the world flew and competed for the honor of being the ‘Best of the Best’ in ground attack and target destruction. Top Team honors went to the Connecticut ANG and they in turn hosted the next event, Hawgsmoke 2002, at the Fort Drum Forward Operating Location in New York State.

There, 17 teams and 62 aircraft competed, with the overall winner being the four member team from the 47th Fighter Squadron at Barksdale AFB, LA. The 47th had come in second in 2000 and were determined to make up for unfinished business. Hawgsmoke 2002 focused on accurately dropping BDU-33s practice bombs, firing the AGM-65 “Maverick” missile, and strafing proficiency with the 30 mm Gatling gun. Much emphasis was placed on target acquisition as well.

The third event, 2004 Hawgsmoke, was hosted by the 47th FS “Dogpatchers” and held at England Air Park, formerly England AFB, in central Louisiana. 18 teams and over 70 aircraft made the trip in anticipation of the competition, camaraderie, and celebration of the world’s premier CAS aircraft.

Unfortunately, the competition was undone by forces of Mother Nature and the bad weather resulted in Hawgsmoke 2004 becoming known as Hawgwash 2004. Nevertheless, it was declared a success for the opportunity of the Hog community to get together, share experiences and party like rock stars.

Fast forward to 2006 and this year’s renewal, Hawgsmoke 2006, held at Davis Monthan Air Force Base in Tucson, Arizona. March 22 through 25. Adding even more to the luster of Hawgsmoke, this year’s fest celebrates the 30th Anniversary of the A-10. 140 aircraft are expected to be on the ramp and the best Hog drivers in the world will engage in air-to-ground attack at the Goldwater Range in central Arizona. You can read more about it, perhaps pick up an inert 30mm round or a shirt in the Merchandise area, or just browse here.

It is traditional with Hawgsmoke to begin with a remembrance ceremony for fallen comrades. Following the reading of the names of all fallen Hog drivers, an A-10 missing-man formation flies overhead. At the conclusion, there is the customary downing of a shot of whiskey, in honor and remembrance of old friends and colleagues. Finally the shot glasses are smashed as a mark of respect for those who have made the ultimate sacrifice, and to say that they will never be forgotten.

It is a touching and moving experience, one those who have had the privilege to witness will always remember. 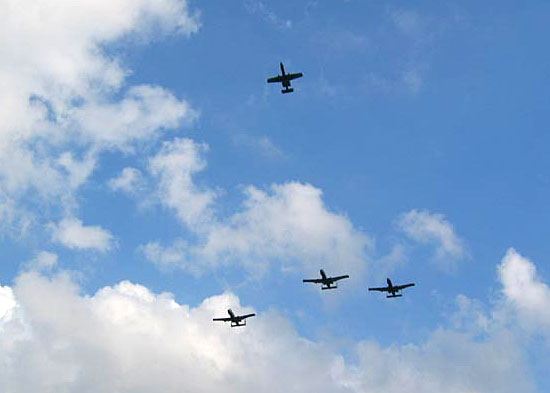 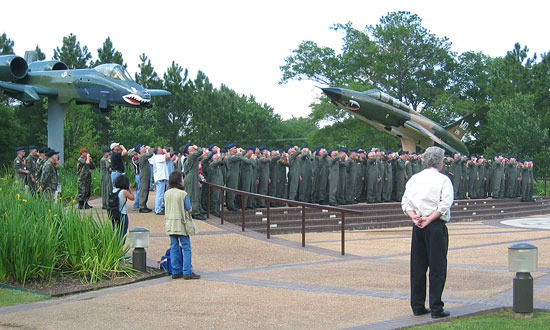