Traveling overwatch is used when contact with the enemy is possible. You have less control of your element because you’re more spaced out, Which means your element is more dispersed. Your speed is slower then regular traveling, because you’re on a higher alert level, therefore security is a little better.

With traveling overwatch, your fire team or squad forms up in the ordered formation, usually a wedge, but with more space and more alertness. If You are moving as a squad the squad leader may break the formation down into two fire teams, alpha fire team taking the lead, with the squad leader in the middle, then followed by bravo fire team.

To see a video of a squad, broken down into two fire teams, using the “Traveling Overwatch Movement” technique click here. The 2.44MB .wmv file is zipped. 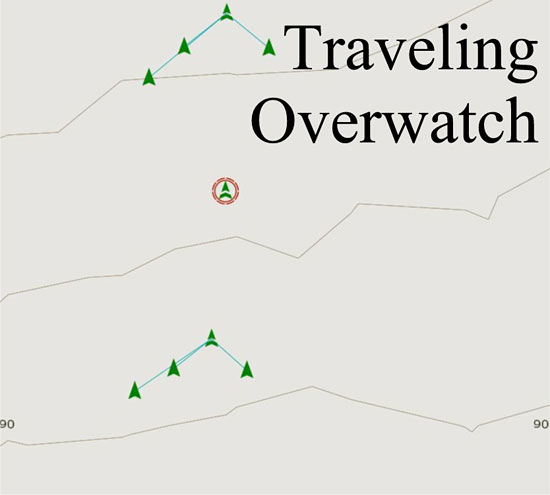 Bounding overwatch is used when contact is expected, when the fire team leader or squad leader believes that the enemy is near, or when a large area or danger area needs to be crossed.

Bounding overwatch in real life is only done at the squad level or higher because fire teams are never to be broken up, and it takes two different elements (in a squads case, an alpha fire team and a bravo fire team). But for virtual computer games if it’s only 4 on 4 or something similar, then it would be OK to break down to smaller fire teams. But for this brief we will work as a proper squad.

The trail fire team bounds and signals the squad leader when his team completes his bound and is in a over watch position. The fire team leader should know where the objective is and how best to get there using the available terrain. The overwatching fire team needs to know where the other fire team is and their direction so they can properly support them especially if they come under fire.
Bounding overwatch works like this: The squad leader, using intelligence, binoculars, and map recon techniques, calls out the beginning bounding overwatch location, the direction of movement, and the end point. The alpha fire team moves out depending on terrain, (close terrain only 20 yards or less, while a nice open area could be 50 yards or more if necessary, but never over extended past the cover teams sight and fire power.) Once the alpha fire team moves out and finds a good cover location overlooking the direction of movement, the fire team leader signals the second fire team, fire team bravo, to move out. Bravo fire team moves past the alpha fire team and takes up a good cover position overlooking the direction of movement. After scanning the area for enemies, bravo fire team leader signals alpha team to move forward and this continues till out of the area or enemy contact occurs.

The squad leader can stay with one fire team or can move back and forth from fire team to fire team as needed, because one fire team will always be passing another one stopped and scanning. (Basically bunny hopping team by team.)

To see a video of a squad, broken down into two fire teams, using the “Bounding Overwatch Movement” technique click here. The 16.14MB .wmv file is zipped. 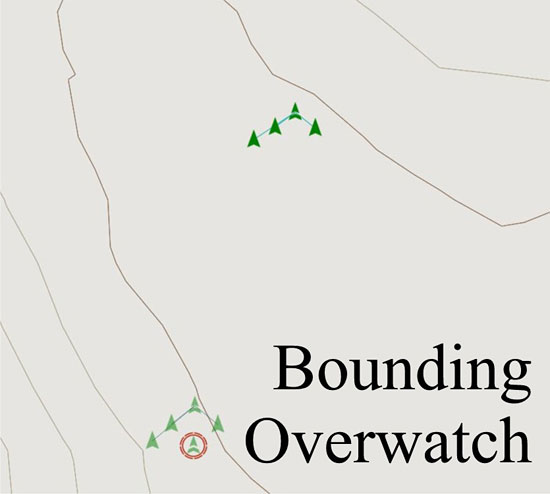 Tactical Briefing 05: How to Plan and Execute a Squad Sized Assault Page 5