For me, a blind gamer, frustration is the rule of thumb when it comes to modern games. Most of the games on today’s market are very hard to play for someone with limited or no sight at all, and this was also true of a game released some years ago. This game went by the name of Jane’s Fleet Command.

I am quite interested in naval warfare, my father is a colonel in the Belgian Navy, so I sort of grew up with it all. Still, I had, until today, not played any decent naval simulation that I could be good at. I had heard of Harpoon before, but had never played it. When my brother bought Fleet Command back in ’99, I was intrigued with the scope and scale of the game, but in the end it was very boring for me. The sound wasn’t all that great, with rather muffled explosions, and repetitive ones at that, and really not that much info about what on Earth was happening.

Still, I longed to play something like Fleet Command. The style of gameplay appealed to me, and so when I saw the public beta for Harpoon Classic 2002 appear, I decided to give it a try.

After installing the game, the tension began to mount. I was expecting the game to jump to full-screen mode and block me out of the action, but surprisingly enough it did not. Before I knew what was happening, I was selecting a scenario and set sail.

When I started the tutorial scenario, I started reading up on the game mechanics, and immediately I was faced with my first problem. Setting a group course. This is incredibly hard for a blind person to do, or rather it is impossible. The reason for this is that one needs to click on the map using the mouse to set the course. Would it not be easier if you could just enter the course in degrees, that’s what I ended up desiring, but fortunately, in well populated scenarios it’s not that big a problem. 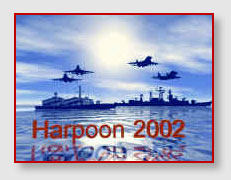 Once I threw out the tutorial, I decided to go and try out the game in full swing.

I decided to play a scenario in the North Atlantic, where the president had to be evacuated, and the Soviets were wreaking havoc. Right from the start, I more or less lost my way, I hadn’t taken the time to examine the hotkeys, and the scope of the scenario just surprised me. I managed to get the president and his helicopter out of trouble before Andrews Air Force Base was destroyed, but it all went downhill from there.

First I lost a carrier group, and then I had to contend with Soviet submarines as they were ravaging my surface forces. I decided to quit soon enough, and tried a lighter scenario.

A simple scenario in the GIUK gap campaign put me in command of two NATO frigates and a few merchant ships. Again, I found myself being attacked by a Soviet submarine, among other things, but here is where I could really use a snapshot option. It wasn’t until I found out about the ability to counter fire torps only recently, but I didn’t know at the time. Still, I’m happy the option is in there.

From experience gathered in two days of extended play, I can be confident in saying that Akulas are a pain. Alfas, Sieras, and Kilos aren’t all that hard, but Akulas are just amazingly annoying. I had to contend with one of those on the way to Keflavik for a carrier air strike, and at one point it launched about four torpedoes without me knowing where on Earth it was. This was partly due to the fact that I cannot set different patrol routes myself, but still, I played the whole scenario through, and though the sub did not manage to hit any of my ships, I never got a confirmed kill, even though I torpedoed it multiple times.

When I was done with the GIUK gap, I searched through the rather extensive list of battlesets to find an EC2003 campaign, namely the Indian Ocean/Persian Gulf. Finding the introductory briefing rather amusing, I started the first mission, preparing to destroy some terrorist camps in Iran. This is going to cause trouble, I thought.

I was a bit disappointed to find Diego Garcia without B-52s, this left me with only limited options using my tanker aircraft, which is a bit hard to do over long distances for me.

Overall, these fictional scenarios look very interesting, even putting you against the Saudis, the Iraqis AND the Iranians at one point. At moments like this, you will often sit there and ask why the USA allowed the Saudis to use the F-15C.

As far as air combat goes, it is as realistic as can be expected. The Harpoon rules look pretty well balanced from what I know, for me it’s almost like playing AWACS sometimes.

H is for Historical

There are also some historical scenarios in the beta package. The air campaign over Iraq, for example, was a very enjoyable scenario. An extensive battle area, cruise missiles, B-52s, and the F-117A are all in there, as well as the usual appearances of the Tornado, Falcon and the F-15C and E models. Destroying bases is easy; as long as you don’t get too close to Baghdad, because that’s where a lot of the MiG-29s reside… air superiority is key in this scenario.

I have not played any other historical scenarios, or to be more accurate, I have yet to explore more of the battlesets. The point is, this game is so full of scenarios that are varied and interesting most of the time, that this game will keep the hardcore naval buffs playing for a long, and I mean long, time. I would not call myself a naval buff, but this game has me hooked.

This brings us to replayability, and HC2002 GOLD doesn’t disappoint here either. Not only is there a scenario editor, but also a database and platform editor so that you can make additions to the game itself or change things currently present in the game, which is a nice feature indeed; this adds an extra dimension to developing your own scenarios or campaigns. This gives the game an even longer lifespan, and add in the scenario converter for getting to play older Harpoon scenarios, and you can imagine that this game is an absolute treat for fans of the genre.

The beta is stable. That’s always a good thing. I have not really encountered any real issues with the game in its current state, and except for a few inaccuracies here and there that are mostly documented in the readme itself, this game is perfect.

If you love naval warfare, you’ll love this game. It is so full of detail that you cannot help but be awed, or at least I was since this was my first Harpoon experience. If you love sims in general, you will want to give this game a try while you can, you might like it, you might not, but you won’t hate it.

Until Harpoon 4 comes along *wink*, there’s going to be a lot to play with, and a scenario editor to boot. This game gets a lot of praise from me, and I hope the beta lasts for a little while longer. When it does ship, I will gladly buy it, though I do wonder why one puts 30 to 50 MB on a CD-ROM. Thumbs up to the developers, a job well done.

Editor’s Note: A postscript here regarding Didier. He is one of our primary daily news contributors and continues to provide SimHQ with multiple news items on a daily basis. Thanks Didier, and keep up the good work!