I thought about the case and the fact that it only had one fan, a 120mm back blower. I knew that computers built up heat and that heat must be bad, otherwise there would be no market for coolers. So as long as I was going to the computer store, may as well start a list. Since the case had one “exhaust’ fan at the rear, I figured it could use two smaller “inhaust” fans at the front, and as luck would have it, there were two spaces set up for these fans. I added two 80mm Antec case fans to go with “the little wire that runs from the DVD drive to the sound card and otherwise has no name.”

Getting over the idea that everything I would need to build my PC would be in the single box from Zip, Zoom, Fly, I began a search for a local computer parts store. By now I was in a hurry and I didn’t want the delay inherent in ordering a couple parts online.

This turned out to be a frustrating experience wherein I made several trips to a Best Buy and a Radio Shack, and came away with nothing other than strange looks from sales people. I found an old electronics store that used to sell computer parts but was now basically a repair shop and a generic electronic parts warehouse.

They had walls with trays full of little electronic parts that didn’t even belong to computers, they were just parts. Could have been telegraph parts for all I knew. They did however, have a couple Antec fans, and gave me a short piece of cable with tiny connectors on each side that they thought was what I was talking about for the DVD to sound card connection. It seemed pretty short, but they seemed to think it was the right cable for the job. I returned home confident my parts problems were over. They were not. 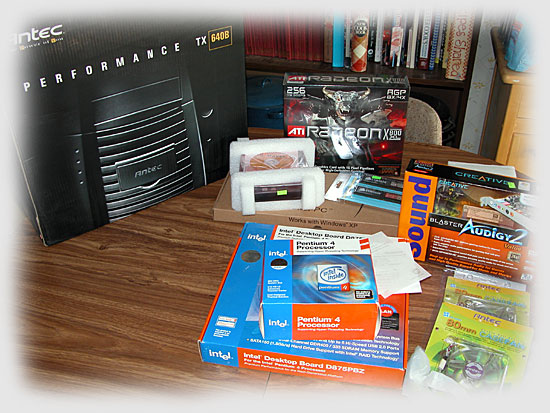 I began the assembly in earnest. The hard drive went in without a hitch. The case fans went in, the I/O plate went in. Next up was the processor install onto the motherboard. Here I began to see conflicting advice about the sequence of events. Some places, including one of Intel’s own Internet site, insisted the motherboard should be installed in the case first, then the processor. This didn’t make sense to me for a couple reasons. The first was I have those club fingers on both hands and once the motherboard was in the case it was clear I would have less room to maneuver and do what I do best, which is drop pieces and knock things over.

Second, certain of the components which would reside on the motherboard needed what I understood to be “firm pressure” when being installed. My version of “firm pressure” had been known to break bolts, wrenches, and screwdrivers, and therefore could possibly crack the motherboard which was a primary reason for doing this in the first place, and that would be a bad thing. It made sense to have the motherboard on it’s static-proof bag on a flat table while applying this pressure. Same thing with the RAM modules. I figured since they needed lots of pressure, best to do it with something firm, like a table, behind it instead of air.

Now granted, the CPU would drop lightly into what is called a “zero-insertion force” (ZIF) socket, but the heat sink & fan were different. And you had to be very careful to install the heat sink straight down with no twisting. Chubby Checker would not have been happy, but I twisted very little, and turned the retention clips with the cams into place.

Next came the Corsair DIMMs. Actually, these were a little resistant to “firm pressure”, and I ratcheted up a notch to “power pressure”. I was really glad the board was flat on the table because I put a little effort into this one.

Next came the actual motherboard into the case scenario. I found the little brass standoffs and…

Why are the little standoffs made of brass? Don’t electrons move easily through brass, as compared to plastic or ceramic or some other non-conductor? Maybe they should make them out of wood. Yeah, that’s it. So somebody like me won’t put a standoff in the wrong place and short out his major award motherboard. Are you listening computer parts makers?

…found all the little holes in the motherboard which were supposed to have standoffs behind them in order to screw the tiny screws into. I got the idea of using a long thin plastic tube, like a straw, to go through the motherboard and thus show me which case hole the standoff was supposed to go into. Sounded good, but like so many of my good ideas, didn’t work. But between my son and I we progressed. I dropped tiny screws a dozen times, only to find them again, trapped inside the case, said a few choice words over screws not wanting to thread into the standoffs and got the job done.

Finally, all the major components were installed, including the video card, which fought me a little bit, but made what I thought was a good “click” sound that indicated successful docking. I began looking for the hard drive cable and DVD cable. These should have been in the box with the motherboard, according to my computer counselor, but as I found out, only the hard drive cable actually was. There were two IDE cables in the box all right, but the other one was for a floppy drive, and I didn’t have a floppy drive. I became a little exasperated at this point because it was clear I was going to need to go back to the computer parts store, or more to the point, find a computer parts store.

But just then, I had a thought. Beginner’s luck maybe, but I remembered the wide selection of old PC’s cluttering up what was at one time a bedroom and now was our combination junk yard / computer room. Grabbing one of the old PC cases, I opened it up, inhaled a quart of ten year old dust, and wrestled the cable away. I cleaned it up and sure enough, it fit. It didn’t look like the other IDE cable, the one to the hard drive, the spaces between the wires were much wider. But it fit, and it worked. However, being ancient technology, I decided that I would have to go find an actual computer parts store.

And find one I did. I didn’t even mind the drive, in fact, I found I actually liked going there. This place was a dedicated computer parts store, they had a great selection and I could see that if I needed something in the future and didn’t want to order online for whatever reason, I had a resource. It was like shopping in a place where they had all kinds of new toys. My PC education was advancing in baby steps, but I took this last part as good sign of progress.

At last, all the pieces were together and connected. It was time to POST. No, not in the forums, and not at the horse rack track. It was time to push the power button. I admit, I was still scared of what might happen, or more to the point, what might not happen. Did I need a fire extinguisher, or better still, the fire department standing by?