Chris “BeachAV8R” Frishmuth did an in-depth interview with arneh back in February 2008, so lets say we’re extending on Chris’ report with some additional questions regarding this latest update.

arneh: I have a lot of reasons for doing the Mi-24. First of all it’s an old cold war icon, that has been involved in nearly every conflict for the last 30 years. There haven’t been a proper simulation of the Mi-24 since Digital Integration’s Hind back in 1995, which was also one of my favorite sims, so I wanted to recreate some of its gameplay.

It’s quite a challenge to fight in one compared to the other helicopters in EECH. While the others have radars, helmet mounted sights and fire-and-forget missiles, the Mi-24 has just old fashioned analog gauges and mostly unguided weapons. But it doesn’t just have a strike capability like the other helicopters, but can also carry troops, which makes for a whole new mission experience.

And finally on little more personal level, it’s an fun cockpit to model as it has so many little and small things cluttering the view. Makes it interesting to model and for a good 3D cockpit for 6DoF TrackIR.

SimHQ: How did you locate, find the research to do it?

arneh: The cockpit is mostly based on pictures I’ve collected from the internet over several years. There is a lot of Hinds out there and many users, so there is also a lot of good cockpit pictures to find. I also have a couple of books about the Mi-24, which have been somewhat helpful. But most of the time pictures I found on the net were more detailed.

I also had some contact with people who has experience from the real Mi-24, which proved very helpful in some areas, like getting the engine startup procedure correct, and explaining some of the instruments. That’s information that is hard to find elsewhere.

SimHQ: What was the biggest problem in doing the Mi-24?

SimHQ: What was anticipated to be the biggest challenge, but wasn’t that much of a problem?

arneh: The new features were the biggest question marks, but as mentioned they turned out to be fairly easy to do. It was also a bit of a challenge to get the moving map to work at such a high level of detail without affecting frame rates.

SimHQ: Same type of question regarding the new terrain textures.

arneh: The terrain textures were mostly just about getting the idea in the first place. Then when some initial experimenting showed that it was easy to do it was a no-brainer to actually do it, since the results are so spectacular.

SimHQ: All flight simmers love “buttonology”. What are the new key commands in v1.11?

arneh: New keys for Hind include:

SimHQ: Once again we say thank you arneh for the work you’ve done for the EECH/EEAH community.

SimHQ: Of course we have to ask, when can we enjoy this work?

As an early Christmas present you can download the new additions today! 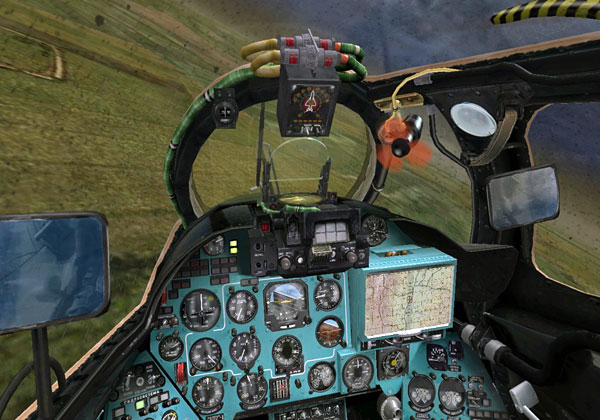