Now lets turn to the “Audio”. Adjustable sliders for each aspect of the sim. Nothing shockingly new here, but efficient and it works well.

One thing that is worth special mention, and it’s something most simmers turn-off right away: the music. Both the Russian and English version share the same composition, and it is fantastic. It’s one of the first sims soundtracks those of us that have heard it actually like to leave on in the interface. Congratulations to the composer. They have created some terrific mood music that fits just right into the sim.

The English voice track is spoken in “proper” British English. No “ya’ll” or “whatziz” from the American side here. All the necessary commands are verbally provided. The voice keeps to the facts with no ad-libbing and gets the job done. Just don’t expect any cutesy quips as you heard in Falcon 4.0.

Supporting the voice track, I became attached to the nice tool tips, subtitles and radio assist settings and some use of the [cough] labels as we progressed in learning the Ka-50.

Moving to the “Gameplay” tab, there are two major areas: “Difficulties” and “View Options”.

Note in the screen below there is a selection for “Simulation” or “Game”. These will auto set a series of buttons that match your preset. By selecting and deselecting these, you can allow DCS: Black Shark more of a blend between the two presets. One of the mistakes I think players make is thinking they must go to one or the other preset. The Editor Icons Style is either Russian or NATO symbols. I did encounter a snag on one of our higher-end tests in selecting some of the radio-type buttons. After deselecting a button it would reselect itself. Once the mouse (Logitech MX518) sensitivity settings were fiddled with, this problem seemed to get better for most of the buttons with only an occasionally trick-or-treat effect. 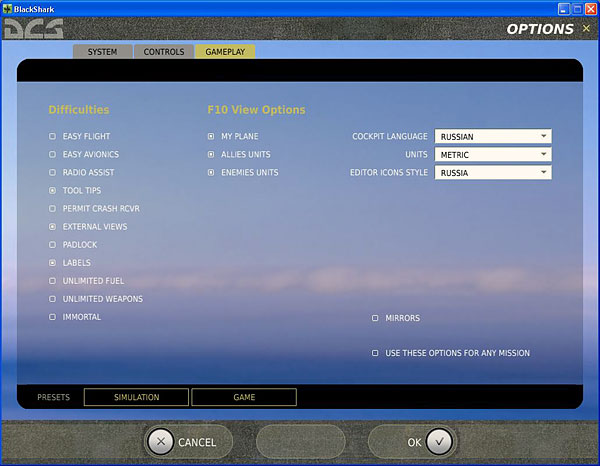