20mm: Ben, welcome to SimHQ, we appreciate your taking the time to talk with us. You obviously love aviation, and especially military aviation. How did that interest get started?

Ben G: Thanks, glad to be here. Well, it seems like I’ve always had the aircraft bug, from back when I was a little kid. My Father worked for Glen L. Martin building the B-26 for the war effort in WW II. My stepfather was in the Navy for 40 yrs., flying F6F Hellcats and later F-9F Panthers in Korea. He was a test pilot for the Navy in late 50’s and achieved the rank of Rear Admiral before he retired after Vietnam.

When I was a kid I was always going to the local transportation museum and playing on the three fighter jets they had. The museum didn’t care about those jets and it didn’t bother them if I climbed on them or got inside them. Can you believe that they didn’t care that an 11 year old kid was crawling all over their aircraft? Of course, that was the 1960’s and people at that time weren’t as concerned about getting sued or what was safe. Thank God I grew up then because you can’t do that now.

In the back of my mind I kept this memory alive like a favorite movie you come back to watch, even though those jet fighters were destroyed after the museum moved. One of my dreams was to own a fighter jet. Seemed pretty impossible, but it’s something I never really forgot about. I guess sometimes dreams can become reality. You just never know what can happen.

20mm: I understand you’re a long time flight simmer as well. Tell us about how you got involved in this hobby.

Ben G: I have been a simulation pilot and computer junkie since 1990. My first air combat sim that I used to play for months was Chuck Yeager Air Combat. I thought that it had the right feel of the sensation of flying. The flight dynamics were very relaxed, but the graphics, for that time, were colorful, the depth perception and damage modeling was absorbing. I remember taking my desktop computer a 386sx, to our hunting cabin and at night we use to drink George Dickle and play cards until two in the morning. When I showed up with this computer and the Yeager flight sim with a cheap joystick to fly it, my brother asked “What the heck are you doing with this?”.

They watched me fly the sim and one of my hunting partners wanted to try air combat and he got hooked on that game, so much so that he could not put it down! He later told me that while he was driving the two hours back home, every single mail box he saw, he was mentally lining up imaginary crosshairs on them. I could not stop laughing. He was ate up so badly with this game that he purchased a computer just to get it out of his system.

20mm: That’s funny, I think a lot of us can relate to that. You said you had a childhood dream of having your own fighter jet one day. How did that dream happen? It obviously involved a significant commitment of time and money.

Ben G: That it did! Well, as a part of my flight simulation experiences, I wanted to build a cockpit to add some immersion to that. So I built up a crude cockpit out of wood. But I really wasn’t satisfied with that. So my childhood memory came back and I could not get it out of my mind. I wanted to climb up on a fighter jet again, like at the museum, and so I started making calls in the aviation community. After all, I was a pilot and A&P Mechanic . My wife did not share this enthusiasm and thought I was out of my mind. In a way she was right. I located some fighter jet airframes but they were too expensive and for the most part stripped out. Life got in the way, as it does, and I put the Genie back in the bottle and forgot about it for several years.

Then one day, a friend and coworker who had moved to Tucson called me up and asked if I wanted a jet fighter from the Boneyard. I flew out there and my friend told me that he found a place that had some F-4 cockpit sections but he didn’t know if they were even for sale. We went there and talked to the guy that ran this Demill business. He didn’t want to talk to us unless we bought something. I said I was interested in an ejection seat so he perked up and showed us where he kept a bunch of B-52 and F-4 ejection seats. I bought a Martin Baker H-7 seat out of an F-4. The seat came with a seat pack but that was it. I asked him about an F-16 maintenance trainer that had caught my eye and he said it was for sale. I knew someone I could sell that to, so I kept it in mind.

I kept looking around and found twelve F-4 front sections that were stacked on top of each other. Some had more damage than others but he kept the best one out front as his gate guard. The Genie was seriously out of the bottle at that point and I could just picture myself climbing up on that F4. He told me the price and I still remember telling him that there was no way he was serious about selling that F-4 for so much. He got insulted and said that was the price, like it or not. We got to haggling a little, and I said I could sell the F-16 front section for him if he’d come off the F4 price. And that’s how it worked, and how I got the gate guard. And then I was standing on the side of the aircraft checking out the front cockpit. The dream was becoming real. 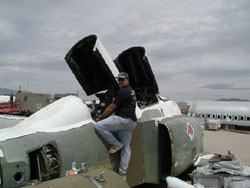 PSA: PC Aviator 4th of July Sale 50% Off All the Things

Reborn on the Fourth of July Page 3

Reborn on the Fourth of July Page 4

Reborn on the Fourth of July Page 5