As we said our “good byes”, I thought about Yetta and Bob, I may never see them again but I know because of this day they will always be a special part of me. The day I got to fly a B-17! I know they feel the same way about everyone else too. I appreciated it as an aviator first and a historian second.

The “Liberty Belle” was manufactured at the end of the war and did not see combat service. The following excerpt is copied from the Liberty Foundation’s web site reviewing the history of this wonderful aircraft.

“The Liberty Foundation’s B-17G (SN 44-85734) has an interesting postwar history. Originally sold on June 25, 1947 as scrap to Esperado Mining Co. of Altus, OK, it sold again later that year to Pratt & Whitney for $2,700. Pratt & Whitney operated the B-17 from November 19, 1947 to 1967 as a heavily modified test bed for their P&W T-34 and T-64 turboprop engines. It became a “5-engine aircraft”, having the powerful prototype engine mounted on the nose! The aircraft was flown “single-engine”, with all four radial engines feathered during test flights. Following this life as a test platform, it was donated in the late 1960s to the Connecticut Aeronautical Historic Association in East Hartford. Unfortunately, it was heavily damaged on October 3, 1979 in a tornado, in which another aircraft was thrown onto the B-17’s midsection. The wreck was stored in the New England Air Museum, CT from 1981 until 1987.

In 1987, Tom Reilly of Kissimmee, FL acquired the aircraft, along with another damaged Fortress (44-85813) with the intention that what was left of the two aircraft could be rebuilt into one flyable example. 44-85734 was moved to the Flying Tiger Museum in 1990 and they began the laborious task of restoring her to flying condition in 1992.

With the turn of the millennium, the B-17 was purchased by aviation enthusiast Don Brooks. Having a longtime goal to restore a Flying Fortress, Don had made multiple attempts to acquire a B-17 for over a decade. He helped finance and was directly involved in the Greenland Expedition’s search for B-17’s in Greenland and the recovery of the P-38 “Glacier Girl”. During the Greenland expedition, they discovered a B-17, but it was crushed under the weight of several hundred feet of ice. Not giving up, Don made other efforts to receive salvage rights to recover a B-17 in Canada that has been underwater for over 50 years. Finally, Don became closer to his dream by concluding a deal for 44-85734 being restored at the Flying Tiger’s Museum. 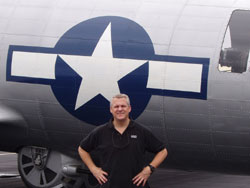 Mr. Brooks, whose father flew as a crew member in B-17’s during WWII, founded the Liberty Foundation, a 501(c)3 Museum that owns and will operate the aircraft. He choose to paint it as the “Liberty Belle” to honor his father, the thousands who served in the 390th based in Framlingham, England and the many who fought for the Allies. The aircraft is a living, breathing reminder of these aircraft and the men who flew and supported them.”

The really cool thing about this particular aircraft is I had seen it before. I grew up in Connecticut, not far from where the museum was in which it was displayed. I even remember the day of that tornado; we didn’t get many of those in Connecticut so it was a big deal. I had actually climbed around in this very aircraft back when I was about twelve or thirteen. What are the odds that thirty years later I would sit in the pilot’s seat and hold the controls of the very same aircraft? Hold the controls and actually fly the airplane that had likely been one in which I had dreamed about doing this very same thing. I find that more than coincidence. It’s almost as if the old gal had come back to whisper in my ear with those big Wright Cyclones. I think she’s telling me she’s glad to see me. She’s glad another pilot has come to appreciate what she already knew. That the sky is a wonderful place to spend your life and the pursuit of that dream is only for a precious few with the knowledge that it’s the only place for them. Just like she knows the only real place to be is up there, among the clouds and the blue. Thanks old girl, I’m glad you were there for me.

Below is a link to the Liberty Foundation web site. On the site there is a schedule and some info about the Foundation and how to get in contact with these fine folks. I can highly recommend that if you get the chance, don’t hesitate to go and get a ride. At most of the shows and events the Belle participates in, you can get a ride. It costs quite a bit, but consider it a once in a lifetime event not to be missed. I would have gladly paid for the privilege to do this. I consider myself doubly lucky that I was in the right place at the right time under the SimHQ banner, which allowed me to experience this. I would like to thank Ray Fowler personally for allowing my son and I the privilege of flying with him. I don’t think he knows how much I appreciated him letting Brian go with us. It’s not very often a father and son get to spend a day like that together and I won’t ever forget that. 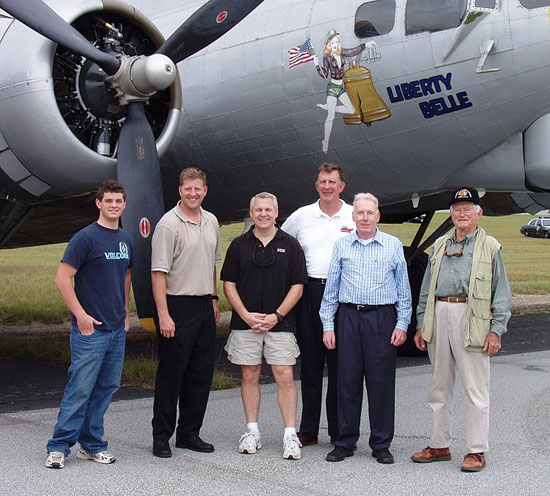