Holding a signed copy of a VMF-214 “Black Sheep” squadron photo, 14-year old Nick Van Fleet was one of them, explaining to his father what he had learned from speaking with McClurg at the booth.

“They were given a baseball bat from their commander whenever they shot down five planes,” he said as he pointed out Major Greg “Pappy” Boyington’s photo and pilots like McClurg holding their bats for the camera. Van Fleet attended the show with his father and grandfather, who was actually a mechanic for the unit in the Korean War. He said that the event increased his interest in flying someday himself. 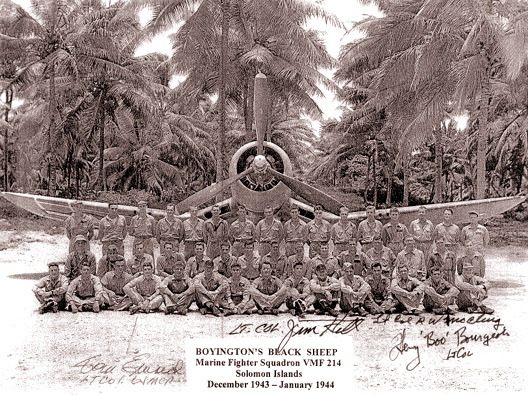 Along with highlighting the work done at the field, bringing generations together was one of the driving forces for the event, said Jerry O’Neill, who emceed the program and was one of the primary organizers.

“When you looked out at the crowd of people listening to the pilots [at the symposium], you could tell people were just fascinated,” O’Neill said. “I think we hit a home run.”

As crowds mingled, overhead Corsairs from the Collings Foundation, American Airpower Museum, the Fighter Factory, and North Dakota’s Tri-State Warbird Collection joined up with ‘Marine’s Dream,’ B-25J ‘Panchito,’ Harland Avezzie’s PT-23A, and the Warbird Experience’s AT-6 Texan to entertain the crowd. Throughout the day, Corsair vets and the general public took to the skies in the trainers, offering regular flight activity and several emotional moments as the WWII Corsair pilots went up in the aircraft, the same models some of them may have learned to fly in during the war.

The crowd swelled on Sunday, June 5 for the Corsair formation flight over the City of Bridgeport’s Barnum Day parade, but before three Corsairs completed that fly-over, they treated the crowd at the airport with numerous runs by the crowd line.

The Corsair’s participation in the parade, and the event in general, come as both a kickoff for the new Connecticut Air and Space Center in Stratford, as well as recognition of the Corsair’s recent designation as the official state aircraft of Connecticut. May 29 has been named “Corsair Day” in the state in honor of the designation, commemorating the aircraft’s first flight in 1940.

In between aerial presentations, the crowd busied itself by talking to Corsair pilots, sharing stories of wartime production at the plant, and speaking to the warbird and antique vehicle crews present. Before he took to the air, ‘Panchito’ owner Larry Kelley and his crew spent several hours answering questions from attendees. He said the historical significance of the event was made clear by the crowd’s interest.