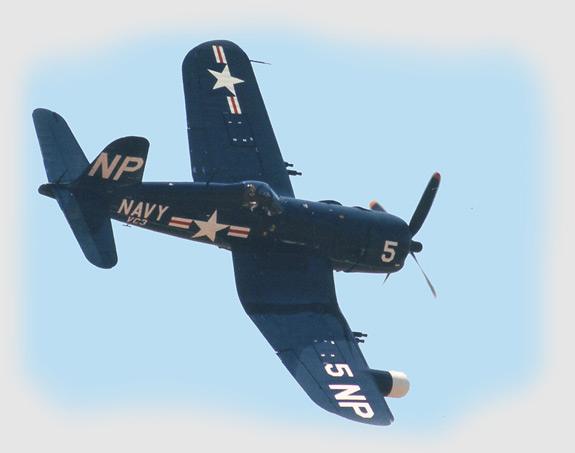 Set at Bridgeport’s historic Sikorsky Memorial Airport, where thousands of Corsairs rolled fresh out of the wartime factory, “Corsairs over Connecticut” was a chance to highlight Connecticut’s aviation heritage and showcase a rare gathering of Corsair variants during the weekend of June 3-5.

The event stayed true to its purpose of a learning experience first and an airshow second, although there was also plenty for crowds to see overhead. Booths featured Sikorsky and Vought employees discussing wartime production at the factory, located across the street, while a mock assembly line and depot offered a host of Corsair parts for viewing, including a 13 foot prop autographed at the event by wartime plant workers. Mid-day “war bond rallies” helped complete the mood for the event, along with a detailed pre-flight conducted by Corsair owner Tom Duffy, demonstrating wartime test pilot procedures before climbing into his FG-1D, “Marine’s Dream,” for an orientation flight. On Saturday, June 4, the family of Chance Vought was in attendance to address the crowd and recognize Vought’s contribution to the region and aviation history. 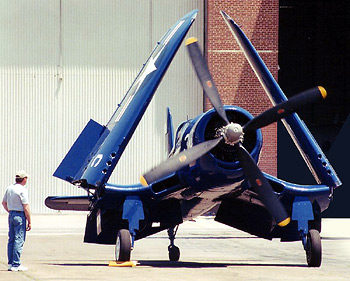 Along with Duffy’s FG-1D, four other Corsairs made it to the event, and joined a collection of warbirds and classic aircraft ranging from L-21 Super Cubs to the B-25J ‘Panchito.’ The top draw of the show, however, was undoubtedly the collection of Corsairs and the men, women, and companies that made them possible.

“I’ll remember my days in the Corsair forever,” said WWII pilot Bill Hereford during a first-day kickoff on Friday, June 3, a symposium of nearly a dozen Corsair veterans that attracted more than 250 people eager for a chance to hear aviation history first-hand. Featuring members of numerous WWII and Korean War squadrons, as well as Corsair aces like Bob McClurg and Archie Donahue (who twice became an ace-in-a-day), the symposium was one of several venues designed for the public to meet Corsair pilots personally. Over the weekend, the pilot’s booth at the event consistently boasted long lines of autograph-seekers, Vought-Sikorsky workers, and large numbers of families and young people.