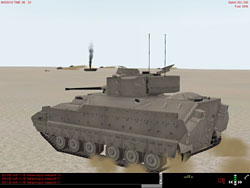 For virtual American tankers, the addition of the M2A2 / M3A2 Bradley is the largest change in crewable vehicles. I’ll jump to my summary of the experience…. the Bradleys are a hoot. While I wouldn’t advise virtual Bradley commanders going mano-a-mano against tanks, they can definitely deal out punishment and offer players interesting capabilities for missions.

The Bradley’s primary offensive firepower is a 25mm. chain gun, which fires both HE-I (High Explosive-Incendiary) and sabot rounds at varying rates of fire (single, 100rpm, or 200rpm). The gunner selects the ammunition type (unlike in the tanks, when the gunner only responds to the tank commander’s choice of ammunition), and the cannon is automatically set to a low rate of fire. Another press, and rapid fire is selected. The cannon, particularly the sabot rounds, allow for vehicle kills out to a great distance, and even main battle tanks are vulnerable to flank or rear shots. The cannon also comes in handy for attacking helicopter and infantry targets. A coaxial 7.62mm machine gun is offered as well, although I haven’t found that I use it often.

Complementing the guns is the wire-guided TOW anti-tank missile, which can reach out and touch someone at ranges of about 3,700m.

Gunnery in the Bradley takes some getting used to. While there is a laser rangefinder, there’s no automatic lead calculation, so hitting a moving target requires a good deal of luck and practice. Unlike in the M1’s gunner position, switching between sabot and HE-I rounds in the Bradley physically moves the sight picture to compensate for the flatter trajectory of the sabot and the more arcing HE-I flight path. Similar to the tanks in Steel Beasts, once a round is in the cannon’s chamber, the only way to remove it is by firing, so the first round out the barrel will likely miss, as it will be the previous ammunition type loaded, not what’s currently selected (or sighted for). Selecting the TOW brings up a simple crosshairs scope picture, and while the missile is in flight, “all” the gunner has to do is keep the target in the center of the crosshairs to score a hit. I write “all” because trying to do so on a moving tank 3,000+ meters away is no simple feat! There’s a great desire to try to ‘fly’ the missile to the target, but it’s important to ignore the weaving flight path of the TOW…simply focus on keeping the target in the crosshairs and you’ll score a hit. Considering that the flight time of a TOW is upwards of 20-25 seconds at maximum range, you’ll find time slows considerably when a missile is in the air and the enemy is firing back! The Bradley’s TOW launcher only carries two missiles, but there are more rounds carried onboard that may be loaded when the launcher is empty….while that process is underway for nearly a minute, the turret is automatically turned, the cannon elevated, and the Bradley is essentially toothless.

One other factor that I hadn’t planned on was the Bradley’s thermal imaging system. Unlike the green-and-black colors players have grown used to in Steel Beasts, the Bradley’s viewer uses red and black. I find it far less useful, and since there’s no contrast settings built into the game (other than reversing red-hot and black-hot), I’ve physically had to adjust the contrast of my monitor to spot targets out at long range. 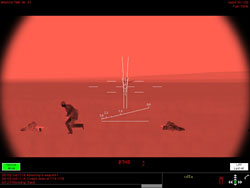 Lastly, the Bradley vehicle itself is really just one part of what completes the picture…you also get troops to go along with it. A press of the ‘U’ key and the Bradley’s dismounted infantry leave or enter the vehicle, and when dismounted become a separate controllable unit. The M2 carries a squad of six soldiers; the M3, a pair of scouts. Although at this time, the Bradley infantry unit can’t have its loadout adjusted by the mission designer or player, infantry units in general may be armed with a mix of small arms and anti-tank weapons like the RPG family or AT-4. They also can carry ATGMs, which, depending on the type, can destroy armor out to ranges of 2,500 meters. Working in concert with its infantry, the Bradley can offer a wide range of offensive and defensive tools for the player. I think it will be a very popular vehicle in missions. 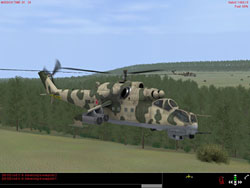 The December 2004 unveiling of the Hind helicopter in a set of screenshots from eSim took many, including myself, by surprise. There has been a somewhat firm policy in the past from the company that given the scope of the game, adding air units had a strong likelihood of throwing the game balance out of synch. However, since PE is based on the model of software made for military contracts, it seemed inevitable that one day a military client would seek to add helicopters to the mix.

The Hind is a refreshing addition to Steel Beasts, and quite useful in the right settings. Like most of the vehicles in the game, you can’t directly fly the Hind, but may place its waypoints, fire control, and other constraints on the map screen just like any other unit; the sole feature added for the Hind seems to be a new selection for altitude (Nap of the Earth, Treetop, and Normal). It is a superb scouting platform, and armed with unguided rockets, four ATGMs, and a nose-mounted machine gun, it is a well-equipped killer also.

The Hind is not omnipotent by any stretch of the imagination. While there aren’t dedicated AAA units in PE (or an equivalent Western attack helicopter), once sighted, it can be easily downed by either autocannon or main battle tank cannons. The trick is to spot them first, a task easier said than done. In most scenarios when I’ve added a helicopter threat, there’s a call of “Choppers!” just seconds before I start taking losses. Unless the Hind immediately moves for cover after that first kill, though, it is often downed while in the hover, guiding its second missile. I’ve even seen infantry units take down a Hind that was hovering nearby, unaware apparently of the threat. However, I’ve also seen entire tank platoons reduced to wreckage in under a minute by a pair of Hinds…. this is not a unit you want to gamble against.

Of course, since each mission in Steel Beasts is only as good as the mission designer makes it to be, it is entirely possible to add a disproportionate number of Hinds into the mix and make the gameplay unbalanced in a particular mission. Let’s hope sanity prevails when user missions begin showing up for PE.