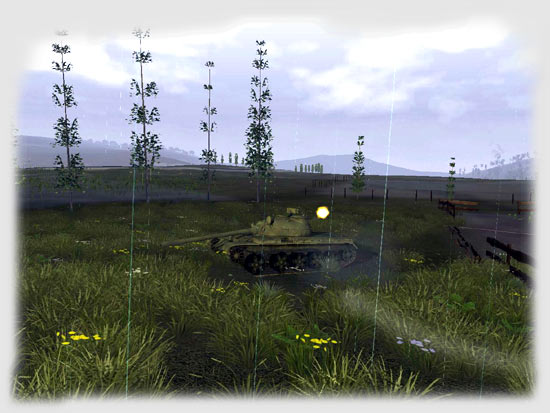 Sergei interrupted, shouting at us, then down into the turret. “Everyone inside! Pavel! Soldiers ahead!”

We scrambled for our places. As I pulled on the headphones I could hear my brother giving orders.

“Make way!” Vadim hit the brakes, slowing us, as Pavel began firing. We were on the offensive!

“Traverse right 135! More of them, bloody mujahids, in the open! It is a convoy!”

Squinting out the port I could see trucks, a tanker and two covered GAZ-66 trucks, on the road ahead of us. We had the advantage, the IRLF thought we were friendly! After all, the Russians across the Gumista did not operate the T-55. By the time they could see the American flag on our radio mast it was too late, for they were dead from the gunfire of Pavel’s coaxial DShK. He and Dan again tapped knuckles in the American fashion.

“You know, Dan, I will miss you when we are three again.”

Dan’s grin was interrupted by my brother, who was still peering downrange. “Bloody hell! Pavel, azimuth twenty! Where did the mujahids get those?”

“Load AP, Dan!” Pavel zoomed in his scope. “These M-50s are thin as paper. But that damn 75mm gun of theirs can punch though our armor at this range!”

“Vadim, accelerate to the right, into battle! Get us off this road!”

The T-55 lurched hard as it ground into the softer dirt, Pavel fighting to keep the stabilized 100mm gun on target. Unlike their T-72, whose fire control system would keep the weapon pointed in the last direction the gunner pointed it, the T-55’s gun turned with the tank’s lateral movements, even though it was stabilized vertically! Cursing, Pavel zoomed in the optics and lased their target. Who would fire first? Dirt and smoke billowed up beside us, our tank lurching from the concussion. Their fire-control system far older than ours, the guerillas were outmatched. Pavel would not miss, and his shot blasted through the Sherman’s frontal armor.

In the Great Patriotic War, the Americans called their Shermans the “Ronson,” after a famous cigarette lighter that would light every time. The mujahids fared no better, and their Sherman became a flaming tomb as well.

“Watch those avtomatyks over there, to the left! One’s got an RPG!” Sergei slewed the antiaircraft MG, spraying bullets at the enemy soldiers. “Where’s that blasted bridge?”

“It is ahead, there!” Vadim threw the tank into a grinding left turn. “Less than a thousand meters! See, the river is near!”

Back onto the road, we neared the bridge, Pavel and Sergei using the machine gun to kill the remaining mujahid soldiers. Gaining the bridge, we roared into Russian-held territory once more, our mission soon to be complete.

As I listened to my brother’s crew and Dan celebrate our victory over the headphones, I collapsed back into my seat, and gave in to the overwhelming emotions flooding through me.