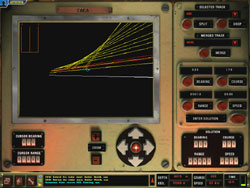 “Conn, sonar. Contact bearing 063. An 18 kilohertz sonar! And we hear it on the hydrophone now, twin screws. Identify the contact as Master 01.”

I pulled the kashtan, a small, chestnut shaped microphone, from the overhead.

“It is a Western sonar, Captain. It does not approach. Bearing changing, now 070.”

I looked at my starpom, Igor, who hovered nearby, anxiously.

“In these waters, a surface contact with a Western sonar? And twin screws? It must be enemy, a warship.”

“Da. And close. and close. The Americans and British are too seaward of us, and the sonar signature is all wrong for one of the Turkish Perry class ships. Raise the scope. Let us see our new friend.”

The enemy came into sight in my scope. I twisted the magnification.

I punched the red button, to take a photograph of the ship. We would be sure of our friend before taking action. Suddenly, the ESM receiver blared! The enemy was operating his radar in addition to sonar, and it was bouncing off our periscope! We were dangerously exposed, and I lowered the scope instantly. 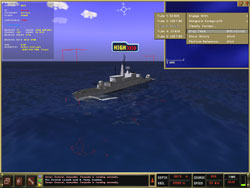 “Ahead one third. Right standard rudder, steady up on course 085.”

I looked over at Igor, and gave him a wolfish grin.

“It is that Iranian frigate we were warned about. Right in our laps! And he does not know we are here.”

Igor nodded. “Shall we introduce ourselves?”

“Da. Send the men to their action stations. Quietly. And quickly.”

As he barked orders, I pulled down the kashtan.

“Torpedo room, this is the Captain. Firing point procedures for tubes one and two.”

Tube one was loaded with the USET-80 torpedo. It has an active acoustic homing device. The 53-65K torpedo in tube two was different, and would pick up a ship’s wake. If the first missed, the second would not. And we had more still. The Iranian would go to the bottom. In the torpedo room, feverish activity ensued.