I wait 45 seconds and then launch torpedo 2, again Sonar reports “torpedo is running normal”. The torpedoes and the cargo ships sound spike become one large one. 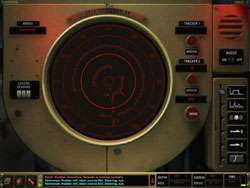 I make an evasive course change to put my stern to the Perry FFG so that should a counter attack happen when I launch the countermeasures they will be between the incoming torpedo and me. 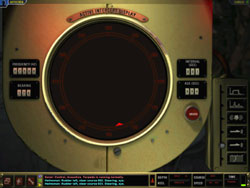 …could Lady Luck have been with me and that the Perry FFG was facing away from me when I launched?

I watch the Navigation station display show that the first torpedo has missed the target?! 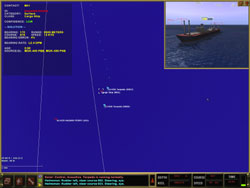 I was certain that the TMA solution was accurate, where could I have gone wrong? Surely, the second torpedo will not miss?

With doubt running rampant in my mind, Sonar announces “Loud explosion on the bearing of Master 1 (M01)” 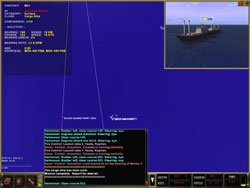 Success with the first torpedo!

While the above example was thankfully, a success, on a previous attempt of the Kilo Demo mission (not my first) I had been detected as a result of my torpedo launch, in the counter attack I was sunk. During the replay, I realized that I was out by several thousand meters and basically had no idea where the target really was.

The last two show & hide truth give an excellent example of how when the truth is hidden, the Navigation station and the 3D view only display what is believed to be there and this may not be what is there.